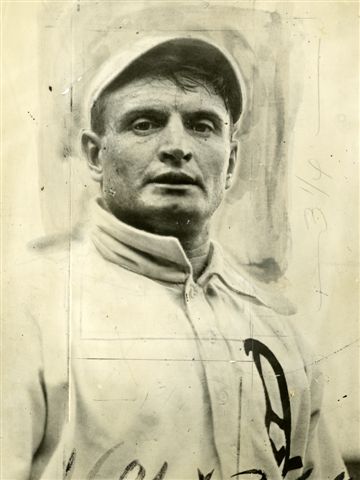 “With Rube] Waddell hurling the game of his life, the Browns never had a chance to win,” opined the St. Louis Republic about the Philadelphia Athletics pitcher’s overpowering five-inning no-hitter in rainy conditions.1 Waddell was “wound up to perform all sorts of stunts,” gushed the Philadelphia Inquirer; however, the paper noted that the Browns’ only hit resulted when Waddell fell fielding a grounder.2 “In view of the slippery condition of the going, the slip was pardonable, and a hit had to be registered,” continued the Inquirer. As baseball fans awoke the following day to read conflicting accounts of Waddell’s abbreviated gem, the Brooklyn Eagle reported that “[his] record of no hits is in doubt.”3

Owner-manager Connie Mack’s Athletics (57-38) were charging to their second pennant in the last four years. They had won nine of their last 12 games to remain in first place, three games ahead of the Chicago White Sox, as they prepared to battle the lowly, last-place Browns (34-63) in the third game of a four-game series to conclude a 15-game homestand.

A major reason for the A’s success was 28-year-old right-hander Rube Waddell, regarded as one the most popular players of the era. Acquired in June 1902 after he jumped his contract with Los Angeles in the independent California League, Waddell set the AL on fire, winning 24 games in less than three months, pacing the AL in strikeouts, and leading the A’s to the pennant. His status as one of the hardest-throwing pitchers in baseball grew the following two seasons, when he won 21 and 25 games and fanned 302 and 349 batters, respectively. (After Walter Johnson struck out 313 in 1910 and 303 in 1912, no big-league pitcher punched out 300 or more batters in a season until Sandy Koufax in 1963.) Waddell “had the fastest and deepest curve I’ve ever seen,” exclaimed Mack, who thought it was even better than his famous heater. Waddell was 20-8 thus far in 1905, pushing his lifetime record to 119-82. Rube was renowned as much for his legendary antics off the diamond as he was for his accomplishments on it. With a Paul-Bunyan-like reputation, Waddell was historically unreliable, missed starts for all sorts of reasons, supposedly wrestled an alligator, jumped multiple contracts, endured suspensions, and engaged in highly publicized rows, one of which occurred about a month after this game, forcing the pitcher to miss most of the last four weeks of the season and the World Series.

On a warm, humid, 80-degree Tuesday afternoon with threatening skies, a modest crowd of 4,509 spectators, some 3,000 fewer than the A’s season average, arrived at Columbia Park, at North 29th and Oxford Streets on Philadelphia’s northwest side.4

Baseball enthusiasts were treated to yet another dazzling performance by Waddell, whose season was filled with them. “He had the break to his curve, and had absolute control over everything that he handed up for the mystification of the opposing batsmen,” gushed the Inquirer.5 Waddell set down the first 12 batters. A light drizzle had begun falling by the second inning, making the field slick. The Browns’ Bobby Wallace led off the fifth with a tapper to the first-base side. Waddell “slipped over his own pedals” trying to field it, according to the Inquirer, and Wallace was safe with what the paper called a hit. Unperturbed, Waddell mowed down the next three hitters. Through five innings he fanned nine.

While the Rube was flinging zeroes, his mound mate Harry Howell (77-89 lifetime) was having fits controlling his spitter. The Browns’ workhorse, the 28-year-old right-hander was coming off a 13-21 season during which he had completed 32 of 33 starts. He was 11-13 this far in ’05 and had finished all but two of his starts. He led off the game by walking Topsy Hartsel, who was forced on Danny Hoffman’s grounder. After Harry Davis was hit by a pitch and Lave Cross walked to fill the bags, Socks Seybold smacked a sharp drive to third baseman Charlie Starr, whose throw home nabbed Hoffman. Catcher Joe Sugden whipped the ball to first, but Seybold was safe. Inexplicably, Davis “never stopped running,” according to the Inquirer, and was also out at home on Tom Jones’s return throw to Sugden.

After the Athletics squandered Monte Cross’s one-out double in the second, Hartsel led off the third with another free pass and then stole second. Hoffman fanned trying to execute a sacrifice bunt. Hartsel attempted to steal third with Davis at the plate and was thrown out by Sugden. The Athletics were running wild on Howell and Sugden, who had a hard time with his pitcher’s wet ones. Davis walked, stole second, and kept running when Sugden’s wild throw flew into the outfield. In the midst of leading or tying for the AL lead in home runs for the second of four straight seasons (with 10, 8, 12, and 8, respectively), Davis scored the game’s first run on the “cleverest of baserunning and a great slide,” gushed the Inquirer.6

With ominously black skies threatening to transform the drizzle into a downpour, the Athletics “played fast ball” after they scored, in an attempt to speed up the game, wrote the St. Louis Republic.7 Seybold led off the fourth with a single and moved up on Danny Murphy’s sacrifice bunt. “To facilitate the progress of the game to a legitimate finish,” opined the Inquirer, Seybold attempted to steal third and it appeared he was a sitting duck.8 However, “Socks’ gall seemed to unnerve Sugden,” continued the newspaper, and he reached safely on a wild throw. On the next pitch, he broke for home while Monte Cross laid down a perfect suicide squeeze bunt. Socks was safe and the A’s led 2-0.

After Waddell sped through the top of the fifth to make the game official, the skies darkened and the rain picked up. So, too, did the Athletics’ attempts to end the game: Waddell, Hartsel, and Hoffman all fanned in the bottom of the fifth. Umpire Silk O’Loughlin suspended the game and sent the players to their dugouts. After waiting the required 30 minutes, he declared the game over, giving the Athletics a 2-0 victory.

“Too bad for the Rube not to register in his own behalf a no hit no run game,” lamented the Inquirer.9 The paper’s mistake is a pardonable one, even if it caused confusion. The scoreboard at Columbia Park did not show errors, just the score by innings. The sportswriter must have assumed that Wallace’s tapper to first was ruled a hit and not an error on Waddell. Furthermore, the Inquirer was a morning paper, and no doubt the sportswriter rushed to get his story to his editor. The St. Louis Globe-Democrat, also a morning paper, ran the same story as Inquirer; however, the lines referring to a hit had already been deleted, suggesting that the piece had been edited reflecting the official scoring. The game account from the St. Louis Republic did not use the term “no-hitter,” though the box score showed no hits.10

Epilogue: Waddell surged in August, ending the month with shutouts in three consecutive starts, with two relief appearance interspersed, as part of a career-best streak of 43⅔ scoreless innings. It ended on September 5 in a hard-luck 3-2 loss to the Boston Red Sox, in which he fanned 17 but yielded the winning run with one out in the 13th. Three days later, as Dan O’Brien explained in Waddell’s SABR BioProject entry, the mercurial Philadelphia ace apparently injured himself in an amicable row with teammate Andy Coakley, when he fell arguing over a straw hat.11 He pitched only seven more innings that season, finishing with a 27-10 record, leading the AL in wins, ERA (1.48), and strikeouts (287). Without Waddell, the A’s lost the World Series in five games to the New York Giants.

Waddell won 193 games and authored 50 shutouts in his 13-year big-league career. For 86 years, his name was counted among the pantheon of pitchers who tossed a no-hitter. That changed in September 1991, when the Committee for Statistical Accuracy amended the definition of a no-hitter to include only those games that last at least nine innings and end with no hits. An estimated 36 abbreviated no-hitters were removed from the ranks, including Waddell’s rain-soaked five-inning gem against the Browns.

5 “Rube Waddell Is Himself Once More.”

6 “Rube Waddell Is Himself Once More.”

8 “Rube Waddell Is Himself Once More.”

9 “Rube Waddell Is Himself Once More.”