Probably the greatest rivalry in the history of baseball was the Brooklyn Dodgers versus the New York Giants, especially in the late 1940s and 1950s.1 During this period the rivalry escalated as a result of Jackie Robinson becoming a major leaguer in 1947 and Leo Durocher joining the Giants as manager. Durocher had been manager of the Dodgers until Branch Rickey, the Dodgers president, and Horace Stoneham, owner of the Giants, got together in July 1948. The result was a managerial switch that shocked fans of both teams.2 The rivalry was also heightened by incidents involving players including Carl Furillo3 and Alvin Dark.4

In the mid-1950s Walter O’Malley, principal owner of the Dodgers, began lobbying for a new stadium in Brooklyn for the team. The New York politicians plus Robert Moses, who had the power to condemn property for development purposes, were not in favor of O’Malley’s plans. To exert pressure on these parties, O’Malley negotiated an agreement to play seven games in both 1956 and 1957 in Jersey City’s Roosevelt Stadium with the possibility of games in 1958. Roosevelt Stadium, built in the 1930s, could seat slightly more than 25,000. The agreement was financially favorable for the Dodgers, but even more important, O’Malley probably felt such a move could make the New York politicians realize he had the power to move the Dodgers permanently.5

While the Jersey City leadership welcomed the Dodgers, the first six games of 1956 saw only one sellout.6 However, the last of the seven games, scheduled for August 15, was probably the most anticipated and sure to be sold out because the archrival Giants were the opponent. Also, Jersey City had been the home of the top team in the New York Giants farm system. The advent of televised baseball, with many of the Yankees, Giants, and Dodgers games being shown in the New York region, cut deeply into Jersey City attendance, and after the 1950 season, the Jersey City Giants were moved to Ottawa. As a result many Giants fans living in New Jersey were expected to attend the game.

The Dodgers were in second place in the National League with 64 wins and 45 losses while the Giants were wallowing in last place with a record of 40-66. While the Dodgers appeared to be the superior team, fans from both teams realized anything could happen when these two rivals met on the ballfield.

Walter Alston was the manager of the Dodgers while Bill Rigney was managing the Giants. Durocher had stepped down as manager of the Giants after the 1955 season. The opposing pitchers were the Dodgers’ ace, Don Newcombe, who was having a great season with an 18-5 record so far, while left-hander Johnny Antonelli, the Giants starter, was a mediocre 10-12. The lineups for the two teams were star-studded. While the Boys of Summer were aging, Jackie Robinson, Pee Wee Reese, and Duke Snider were in the Dodgers’ lineup. All were later inducted into the Baseball Hall of Fame. The Giants were led by Willie Mays, probably the best player in the game, and Red Schoendienst, who had been traded to the Giants by the Cardinals during the offseason. Both players are also enshrined in Cooperstown.

In the fourth inning Willie Mays hit a bases-empty home run. Some reports mentioned he hit it out of Roosevelt Stadium, the first batter to ever do so.7 The Giants led 1-0.

Antonelli retired the Dodgers in order in the fourth and fifth innings. The Giants threatened in the sixth but Newcombe struck out Bill White to end the threat. In the Giants of the seventh, Randy Jackson coaxed a walk but was stranded at first. The Dodgers mounted a threat in the bottom of the eighth as Charlie Neal doubled with one out. However, Antonelli induced foul pop flies from Dixie Howell and Roy Campanella, batting for Newcombe, to end the threat.

Clem Labine relieved Newcombe in the top of the ninth and retired the first two batters. Foster Castleman then doubled but was thrown out attempting to stretch it into a triple. In the bottom of the ninth, Antonelli retired Junior Gilliam, Pee Wee Reese, and Jackie Robinson, preserving the two-hit shutout.

A sellout crowd of 26,385 witnessed this classic pitchers’ duel featuring the best pitchers for each side. While Newcombe lost, he pitched magnificently, allowing only four hits in eight innings. Antonelli was brilliant, and called it it “the best pitched game in my career.”8 A side note is later that season Antonelli was the winning pitcher against the Dodgers at both Ebbets Field and the Polo Grounds. He beat the Dodgers in three different ballparks in 1956.

Given that this was the last game played in Jersey City during the 1956 season, several Dodgers expressed their perspective on playing away from Brooklyn. Walter Alston commented that “playing in Jersey City proved to be a big help to the club,”9 while Duke Snider said, “I’m looking forward to coming back to Jersey City next season.”10 However, Newcombe was not happy with the fans rooting for the so-called visiting team. “Why these fans are actually cheering for the Giants, I’ve never heard of such a thing in my life,” he said.11 While not thrilled with his Jersey City experience, Newcombe had an amazing year. He finished the season with 27 wins and 7 losses and won both the National League Most Valuable Player Award and the major- league Cy Young Award.12

While the loss to the Giants put the Dodgers three games behind the Milwaukee Braves, the Dodgers won the National League pennant on the last weekend of the season as they swept the Pittsburgh Pirates while the Braves lost two out of three to the St. Louis Cardinals. The Dodgers lost the World Series to the New York Yankees in seven games, with Newcombe losing the deciding game 9-0. The irony of Game Seven is that the winning pitcher for the Yankees was Johnny Kucks, who grew up in Jersey City. In his youth Kucks was one of those Giants fans living in Jersey City.13

The Giants as in 1955 had a disappointing season but did edge up to sixth place at season’s end. Giants fans who attended the August 15 game could take satisfaction with the win and wait till next year for another matchup with the Dodgers in Jersey City. 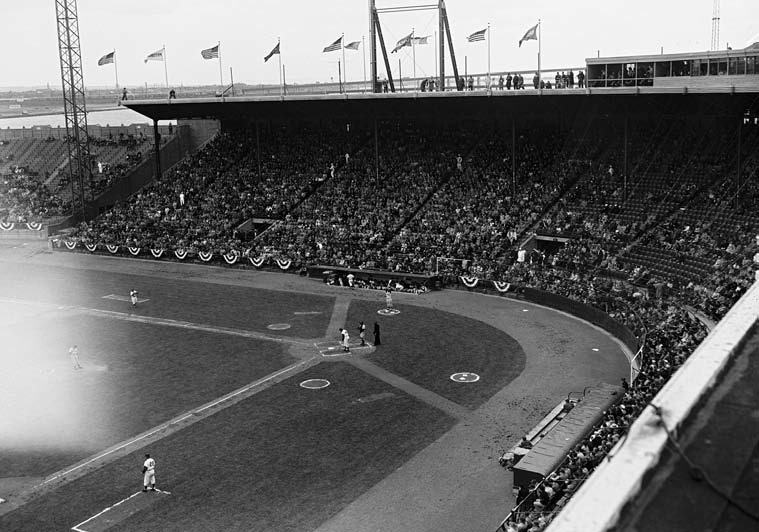 The Brooklyn Dodgers played seven home games at Roosevelt Stadium in Jersey City, New Jersey, during the 1956 and 1957 seasons.

In addition to the sources mentioned in the Notes, box scores and play-by-play accounts for this game can be found on baseball-reference.com and retrosheet.org:

12 Through 1966 only one MVP Award for both the National and American Leagues was given. Starting in 1967 an award was made in both leagues.