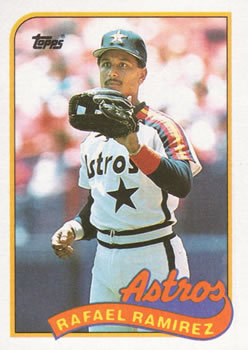 In a career in professional baseball that had already spanned 40 years – and would continue for another quarter-century – Don Zimmer had seen a lot of baseball. In 11 years as a big-league manager through 1989, he had made thousands of in-game decisions. But perhaps none was as interesting as an intentional walk in the bottom of the ninth inning of a tie game. The move backfired and Houston literally walked away with a 6-5 win over the Chicago Cubs.

The Cubs were five years removed from the 1984 NL East title – their first postseason appearance since 1945 – and finally winning again after four losing seasons. In 1987 they finished last in the NL East under Gene Michael and Frank Lucchesi with a record of 76-85. Zimmer assumed the helm as Cubs manager for the 1988 season, and although they won just one more game (77-85), they moved up to fourth place.

But now Zimmer had the Cubs back in first with a 71-50 record, 4½ games up on the second-place New York Mets. They arrived at the Astrodome fresh off a three-game sweep of Cincinnati1 and had won 12 of 16 games since the calendar turned to August. The Astros were three games back of San Francisco in the NL West with a record of 66-55 but had lost nine of their last 14 games.

Zimmer tabbed 12-year veteran right-hander Scott Sanderson (9-8, 4.39 ERA) as his starting pitcher. Sanderson was opposed by Jim Clancy, who was 6-10 with a 4.82 ERA in his first year with Houston. He had signed with the Astros as a free agent the previous December after spending the first 12 seasons of his major-league career with Toronto.

The Cubs got on the scoreboard in the second inning. Andre Dawson singled to center with one out. The hit was the 2,000th of Dawson’s 14-year career, making him the 34th National League player to reach the milestone.2 With two outs he stole second3 and scored when Vance Law ripped a double into the gap in left-center.

Cubs rookie center fielder Jerome Walton entered the game with a 27-game hitting streak in which he averaged .352.4 Leading off the third, Walton lined a single up the middle on a full-count pitch to tie the Cubs’ record hitting streak of 28 games, set by Hall of Fame third baseman Ron Santo in 1966.5

Ryne Sandberg tripled off the center-field wall on a 0-and-2 pitch to score Walton and scored on Dwight Smith’s groundout to second base. The Cubs led 3-0.

Law stroked a ground-rule double to start the fourth and scored when Shawon Dunston tripled down the right-field line. Walton lined a sacrifice fly to right to bring home Dunston and up the lead to 5-0.

Sanderson had eased through the first three frames, allowing just a single to Kevin Bass. But in the fourth with one out, Glenn Davis and Terry Puhl singled. Bass doubled to deep left to score Davis. Puhl tried to score from first on the play but was cut down at the plate on a relay from Smith to Dunston to catcher Damon Berryhill. Sanderson retired Ken Caminiti on a fly ball to end the inning with a 5-1 lead.

Rafael Ramirez started the fifth with a single to deep shortstop and advanced to third on Craig Reynolds’ double to right. Gerald Young walked on four pitches to load the bases with no outs.

Zimmer pulled Sanderson in favor of Les Lancaster, who limited the damage to a single run – Craig Biggio’s sacrifice fly with one out.

After two scoreless innings, Lancaster served up Davis’s 29th homer of the season to lead off the bottom of the eighth, cutting Chicago’s lead to 5-3. When the next batter, Puhl, grounded a single to left field, Zimmer brought in his closer, Mitch Williams.

Williams, a 24-year-old left-hander, led the NL in 1989 with 76 appearances but didn’t last long in this one.6 After Bass forced Puhl at second, Billy Hatcher pinch-hit and smacked a 3-and-2 pitch to center for a double.

After Williams missed the strike zone with his first two pitches to Ramirez, Zimmer made the unusual move of replacing his pitcher in the middle of the at-bat. He brought in Calvin Schiraldi to finish the plate appearance.

“I didn’t like the way things were going,” explained Zimmer later. “I don’t take him out very often.”7

When asked later if he was surprised to relieve Williams in the middle of the at-bat, Schiraldi replied, “Yeah, very. But I’m glad he brought me in. I thought I could come in and do the job.”8

In the process of walking Ramirez to finish the plate appearance, Schiraldi uncorked a wild pitch that scored Bass, but he retired Reynolds and Young to end the inning with the Cubs still leading 5-4.

After getting to Clancy for five runs in four innings, the Cubs were scoreless since. Bob Forsch and Larry Andersen had hurled two innings each, holding the Cubs to three hits. The Cubs missed an opportunity to add a run in the fifth when Dawson doubled with two outs. Berryhill followed with a blooper to short left, but Dawson hesitated9 between second and third and was forced to hold at third. He was stranded when Law forced Berryhill at second.

In the top of the ninth, Astros manager Art Howe brought in closer Dave Smith, who set the Cubs down in order.

Leading off the ninth for the Astros was second baseman Bill Doran, who was in a terrible slump; hitless in four trips in this game, he had just six hits in his last 82 at-bats since July 17. But now he started a rally with a double down the right-field line, just over the glove of a leaping Grace at first.

One out later, Davis tied the game with a double to center. Steve Wilson replaced Schiraldi and retired pinch-hitter Eric Yelding on a grounder to shortstop for the second out with Davis holding at second.

With first base open and Smith’s spot due up next, Zimmer ordered Wilson to intentionally walk Bass. Howe called on veteran Alex Trevino – who was hitting .326 in 86 at-bats for the year – to bat for Smith.10 Zimmer countered by bringing in 23-year-old right-hander Jeff Pico.

After the Cubs’ pitching change, Houston recalled Trevino and sent Harry Spilman to the plate. Spilman was just 2-for-12 in what turned out to be the final season of his 12-year career – but he was an experienced veteran with 73 career pinch hits.11

Zimmer ordered Pico to intentionally walk Spilman, which moved Davis, the winning run, to third base and Bass to second.

The next batter was Ramirez. Although he entered the game batting just .254, Ramirez had driven in the winning run in three of Houston’s nine walk-off wins, including a single in the bottom of the 22nd inning to beat the Dodgers on June 3.12

Pico had not pitched in eight days and struggled to find the strike zone. He walked the free-swinging Ramirez13 on five pitches to bring Davis home with the winning run.

The walk was just the 22nd free pass drawn by Ramirez in 454 plate appearances so far in the season – but his second walk of the night. After the game, Ramirez explained his approach: “[Zimmer] does some strange things. He knows I am a free swinger but I had in mind to be patient and only swing on a 3-and-2 count.”14

Regarding Zimmer’s decision to walk Spilman, “I’ve never seen that before,” remarked Davis, who finished the game with three hits, two RBIs, and three runs scored. “I thought it was strange.”15

The Cubs manager defended the move after the game: “I’ve seen Spilman get a lot of pinch hits and I’ve made that move a lot of times. I have confidence in my relief pitchers that they wouldn’t walk a batter in that situation.”16

The win was the Astros’ 31st one-run victory. They finished with 35, the most in the majors. But Houston faded down the stretch and finished third in the NL West with a mark of 86-76, six games behind San Francisco.

Although Zimmer’s decisions didn’t pan out in this game, he pushed the right buttons for the season. The Cubs finished with a 93-69 record, the best record in the National League. They won the division by six games over the Mets.

The NL East title was the only title Zimmer won as a manager. In the NLCS, the Giants beat the Cubs in five games to keep them from ending their long World Series drought, which now was at 81 years. In 1990 their record fell to 77-85 and they finished fourth. Zimmer’s managing career ended early the next season when he was replaced with the Cubs struggling with an 18-19 record and tied for last place.18

After spending the summer working for his uncle in Westlake, Louisiana, the author attended this game with his uncle and cousin the week before returning to the University of Arkansas to begin his senior year.

The author also consulted the WGN broadcast of the game, which he has on compact disc.

1 It was their first three-game sweep of the Reds in Cincinnati since 1978.

4 As his streak had inched toward the rookie record of 34 consecutive games set by Benito Santiago just two years earlier, the 24-year-old Walton found a way to deal with the increased press coverage he received. “They just ask me the same thing. I just give them the same answer,” he joked. Andrew Bagnato, “Cubs Notes,” Chicago Tribune, August 19, 1989: 2-4.

5 Walton’s streak ended at 30 games when he went 0-for-4 against Cincinnati on August 21 at Wrigley Field.

6 The movie Major League was released on April 7, 1989, and featured the character Ricky “Wild Thing” Vaughn. The moniker was soon applied to Williams and stayed with him throughout his career.

9 Dawson appeared to have forgotten that there were two outs in the inning.

18 In 1999 Zimmer served as interim manager of the Yankees for the first 36 games of the season while Joe Torre recovered from prostate cancer. The Yankees went 21-15 under Zimmer’s leadership and had a one-game lead in the AL East when Torre returned on May 18.