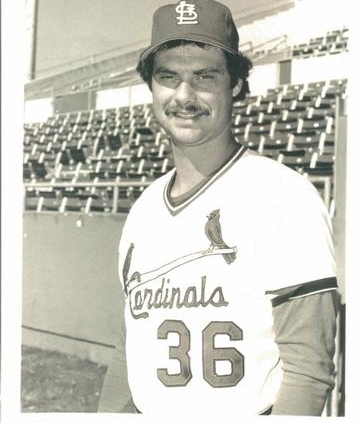 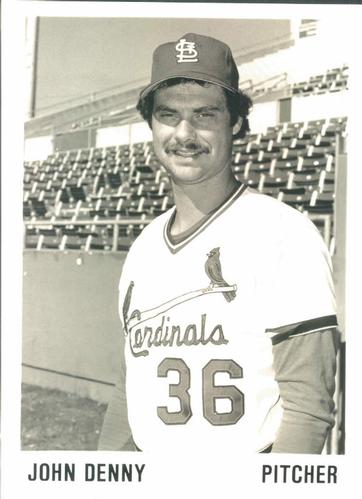 For John Denny and George Hendrick, their actions absolutely spoke louder than their words on August 19, 1979, when the St. Louis Cardinals defeated the San Francisco Giants, 4-0, before a crowd of 42,622 at Busch Stadium.

Denny pitched 6⅓ shutout innings and Hendrick powdered two home runs to lead the Cardinals to a three-game sweep of the Giants on a blazing Sunday afternoon with the mercury reaching 95 degrees. Afterward, neither wanted to talk about his feats with the media. It was standard operating procedure for Hendrick — earning him the nickname Silent George. Denny adapted a similar practice in May after believing he was “misrepresented” in an article in The Sporting News. “I really don’t have anything to say now,” Denny said. “Perhaps another time.”1

Hendrick led off the bottom of the fourth inning with a solo homer to left-center field off Giants starting pitcher and former Cardinal John Curtis, giving St. Louis a 1-0 lead. Hendrick’s second homer was a two-run blast to deep left in the eighth off Pedro Borbon that scored Keith Hernandez, who had singled. In between, Hernandez scored in the sixth. He doubled to left leading off against Greg Minton and, after Hendrick struck out, Tony Scott bounced a groundball to Giants second baseman Joe Strain. Strain’s throw to first was wide and as Willie McCovey stretched to catch it, Scott ran into him and the ball wound up in center field, allowing Hernandez to score.

“He was bringing his arm back behind him,” Scott said of McCovey, who was charged with an error on the play. “I don’t know what kind of throw would make him do that. I hit him as I crossed the bag. But even after the ball popped loose, I thought I was out.”2

Giants manager Joe Altobelli argued with first-base umpire Fred Brocklander, claiming interference by Scott. “I was just trying to buy a call,” Altobelli said. “I didn’t really have a leg to stand on. I was going back to the dugout when I turned around and saw Scott standing on first base. I said, ‘You don’t mean to tell me that he’s safe.’”3 Scott was promptly caught attempting to steal second.

The fleet-footed Scott preserved the shutout — and perhaps the win — in the top of the sixth. Trailing 1-0, the Giants loaded the bases on a single by Strain and walks to Jack Clark and Darrell Evans. With two outs, Larry Herndon belted a line drive into left-center that looked like a certain extra-base hit before Scott made a diving catch.

“I was gambling,” Scott said. “But the worst that could happen was the score would be 3-1. We had four more innings to come up with four runs. … I got a good jump on it. If it had held up a little bit, I wouldn’t have had to dive. But it was sinking and I thought if I dive, I could knock it out in front of me and it would score just two runs. When I left my feet, I knew I had to keep my eye on the ball. If you take it off for one second, you lose it.”4

The robbery had both managers talking after the game. “I don’t know how [Scott] did it,” Cardinals manager Ken Boyer said. Altobelli called it “the key to the game,” adding, “If he didn’t get it, it would have been a triple or an inside-the-park homer. He had perfect timing on the ball. Not only does he make the catch on the blasted ball, but he holds onto it when he hits the ground.”5

Meanwhile, Denny cruised most of the way, scattering five hits (all singles) with two walks and three strikeouts to improve his record to 7-10 and lower his ERA from 4.81 to 4.63. The right-hander retired the first 11 batters he faced before Clark singled with two outs in the fourth. An inning later, Evans and Herndon singled and advanced to second and third on a sacrifice by Roger Metzger. Denny struck out Dennis Littlejohn and pinch-hitter Terry Whitfield to end the threat. Denny was relieved in the seventh with Metzger on first and one out by closer Mark Littell, who proceeded to strike out pinch-hitter Mike Ivie walk Bill North, and strike out Strain. Littell fanned two more Giants in the eighth, working around a two-out single by Evans, and he pitched a perfect ninth to wrap up the 2-hour, 26-minute matinee and earn his eighth save of the season.

Neither team managed a hit with runners in scoring position, the Cardinals going 0-for-6 and the Giants 0-for-5.

Hendrick, Hernandez, and Ken Oberkfell each had two of the Cardinals’ eight hits. At day’s end, St. Louis boasted five .300 batters among their everyday players: Hernandez (National League-leading .341; he ended up as the batting champion with a .344 average and was the NL co-Most Valuable Player with Willie Stargell of the Pittsburgh Pirates), Garry Templeton (.330), Oberkfell (.308), Jerry Mumphrey (.302), and Hendrick (.300). Hendrick’s first multi-homer game since August 25, 1978, at Atlanta gave him 11 round-trippers for the season. In his first full season with the Cardinals, Hendrick wound up batting .300 with 16 homers, and 75 RBIs.

The Cardinals were in the midst of a hot streak that saw them win seven out of eight games between August 17 and 25. However, they still were in fourth place in the NL East Division, 7½ games behind the Pittsburgh Pirates. St. Louis concluded 86-76 and in third place, 12 games behind the eventual World Series champion Pirates. It marked a 17-game improvement from the previous season.

With their fifth consecutive loss, the Giants fell to 57-67 and remained fourth in the NL West, 13 games behind the Houston Astros. San Francisco had dropped the last two games of a three-game series at Chicago before being swept in St. Louis, and then won one of three at Pittsburgh to finish 2-7 on the three-city road trip. On its ensuing homestand, San Francisco hosted those three teams and lost eight of 10 games. Altobelli, who had been named NL Manager of the Year in 1978, was fired on September 6 and replaced by third-base coach Dave Bristol. The Giants remained in fourth place the balance of the season, finishing with a 71-91 record (their worst mark since 1972), and 19 games behind the division-winning Cincinnati Reds.

In addition to the sources cited in the Notes, the author used the Baseball-Reference.com and Retrosheet.org websites for player, team and season information, as well as batting game logs and the box scores for this game:

1 Rick Hummel, “Scott Plays Giant-Killer,” St. Louis Post-Dispatch, August 20, 1979: 1C. In this article, Hummel notes that Denny felt he was misrepresented by The Sporting News about “an incident in Philadelphia where he had displayed temper during a game. Of particular embarrassment to him, he has said, was a photo caption that read, ‘Redbird Redneck.’”