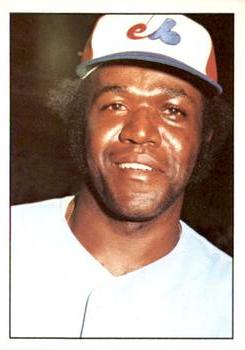 Hard-hitting first baseman Nate Colbert was the San Diego Padres’ first legitimate star. He was the team’s offensive leader for its first five seasons and a three-time All-Star (1971-73).1 After the 1973 season, general manager Peter Bavasi went to Colbert to get his blessing before he acquired 35-year-old Willie McCovey in a trade with the Giants. Colbert had no objections. He was willing to move to left field to make room for the future Hall of Famer in the Padres lineup. “Let him bat fourth and I’ll bat fifth,” said Colbert, San Diego’s former cleanup hitter.2

Colbert went back and forth between left field and first base during a frustrating 1974 season. Plagued by nagging injuries, he saw his batting average plummet to .207.3 John McNamara, who was in his first season as the San Diego manager, cut back on Colbert’s playing time. Padres fans turned on him.4 “I think that hurt me the most, the reaction of the fans,” Colbert revealed at the end of the season.5 That November, San Diego unceremoniously shipped him off to Detroit.6

The Tigers believed that Colbert’s offensive troubles were related to the move away from his regular position. They expected him to hit at least 35 home runs in 1975 and be their starting first baseman for years to come.7 His stint with the Tigers was a disaster. While he had always been a free swinger, he began to strike out more frequently than he had with the Padres.8 Tigers fans booed him incessantly, and he received a significant amount of hate mail.9 From May 26 to June 13, Colbert fell into a 4-for-45 batting funk that lowered his average to an anemic .147. Detroit, asking for as little as a minor leaguer, quickly tried to unload him in a trade, but the other 23 major-league teams all passed. After he cleared waivers, the Tigers sold him to the Montreal Expos for $75,000 just before the June 15 trading deadline. “I just don’t see how he could have come out of his slump over here,” said Tigers manager Ralph Houk. “The people were on him more and more.”10

The Montreal front office had modest expectations for the 29-year-old Colbert, seeing him as an upgrade over their previous backup first baseman, Hal Breeden. They hoped he would provide the team with much-needed power off the bench.11 Heading into their August 2 game against the Phillies, the Expos had seen very little production out of Colbert. He came into the game hitting .131 with one homer, four RBIs, and a whopping 22 strikeouts in 66 plate appearances with Montreal.

After seven consecutive losing seasons, the Phillies were finally a team on the rise. They were in second place with 60-47 record, only four games behind the front-running Pirates. Tom Underwood, a 21-year-old lefty with less than two years of experience above Class A ball, got the start for Philadelphia. He had been one of the Phillies’ best starters up to that point, posting an 11-7 record and a 3.44 ERA.

The last-place Expos, trailing Pittsburgh by 18½ games, sent Steve Renko (4-8, 4.99 ERA) to the mound. The veteran workhorse breezed through the first three innings without surrendering any hits. His only misstep was in the top of the third, when he committed the cardinal sin of walking his mound opponent, Underwood.

In contrast to Renko, Underwood scuffled through the first three innings. The Expos stranded five baserunners in the first two stanzas before breaking through in the bottom of the third. José Morales reached on an infield single with one out, and Bob Bailey followed with a groundball down the left-field line for a double that scored Morales with the game’s first run.

Montreal’s lead was short-lived. After Garry Maddox walked leading off the fourth, Greg Luzinski slammed a long home run to left field to give the Phillies a 2-1 lead. The blast was Luzinski’s 27th of the season, tops in the major leagues.12

There was no further scoring until the top of the eighth inning. A tiring Renko gave up a two-out double to Jay Johnstone and a walk to the dangerous Mike Schmidt. After throwing 134 pitches on a muggy evening, Renko was lifted by manager Gene Mauch in favor of lefty Fred Scherman. The next batter, Johnny Oates, hit a groundball to Larry Parrish that should have ended the inning, but the 21-year-old third baseman booted the ball, and Johnstone scored to extend the Phillies lead to 3-1.

Underwood dominated the Expos from the fourth inning to the eighth, facing only one batter over the minimum. He had given up only five hits, so it was no surprise when manager Danny Ozark sent him back out to start the bottom of the ninth. After Parrish grounded out to open the frame, it looked as though Underwood was assured of the victory, especially considering that the next two batters, Tim Foli and Barry Foote, were hitting .229 and .188 respectively. Foli, breaking out of an 0-for-15 slump, jumped on Underwood’s first pitch for a line-drive single. Foote was also first-ball hitting, and he singled on a sharp liner to center field. With the potential tying runs suddenly on base, Colbert was called upon to pinch-hit for Tony Scott. It was his first plate appearance in six days, and Colbert wasted no time. He slammed the first pitch from Underwood more than 420 feet to right-center field for a stunning three-run home run. In only three pitches, the Expos had gone from being down two runs with the bases empty to an improbable 4-3 walk-off victory.

The Philadelphia battery did not take the loss well. Underwood, facing center field, fell to his knees and slammed his arms into the dirt. His catcher, Oates, flung his mask into the dugout as hard as he could as he angrily marched off the field.13

Colbert was mobbed by his teammates once he circled the bases. “I was just trying to hit it hard and hit it straight away,” said the beleaguered slugger. “I wasn’t trying for a home run.”14

Underwood’s ninth-inning meltdown was a pivotal moment in his season. The shell-shocked hurler went 3-5 with a 5.74 ERA in his remaining 12 starts. Philadelphia had its worst month of the season in August, and went on to finish 6½ games behind the division-winning Pirates. Phillies fans had to wait one more year before their team returned to the playoffs for the first time since 1950.

The young Expos played better than .500 baseball the rest of the way to finish with 75 wins, four fewer than in each of the two previous seasons. Colbert was given a mere two starts for the remainder of the year, although he did produce when given the chance. From August 2 onward, he hit .300 with three homers and seven RBIs in only 21 plate appearances, including another clutch ninth-inning, pinch-hit home run on August 22.15

Despite normally being a slow starter, Colbert hit well for the Expos and new manager Karl Kuehl early in the 1976 season.16 On April 29 he was hitting .304 with two homers and six RBIs in 27 plate appearances. Colbert slumped badly between April 30 and May 22, going 1-for-17 with nine strikeouts. His fate was sealed when the Expos acquired the highly-touted Andre Thornton in a trade with the Cubs on May 17. Montreal tried to trade Colbert, but there were no takers.17 On June 2, the cellar-dwelling Expos gave him his unconditional release. “In all fairness to Nate, he didn’t get a chance to get it going,” admitted Kuehl. “He worked hard, and he was good on the ball club.”18

Colbert left his final message to his teammates on the clubhouse chalkboard: “Good luck, guys.”19 The inexperienced Expos certainly needed it. With the youngest position players in the majors for the second consecutive season, Montreal struggled mightily to score runs, and finished with a major-league-worst 55-107 record in 1976. The Expos’ hitting was so weak that only two Montreal batters finished the season with a higher adjusted On-base Plus Slugging (OPS+) than Colbert’s 108.20

Colbert signed with Oakland a week later and was assigned to the Triple-A Tucson Toros, where he hit .248 with 12 homers and 44 RBIs in 210 at-bats. After being called up by the Athletics in September, Colbert went 0-for-6 with three strikeouts. They were the final plate appearances of his major-league career. As of the end of the 2019 season, Colbert was still the San Diego Padres franchise leader in home runs with 163.

6 Colbert was traded by the Padres to the Detroit Tigers for Ed Brinkman, Dick Sharon, and Bob Strampe. At the time, the deal thought to have been a steal for the Tigers. The trade helped neither team. Jim Hawkins, “Big Nate Giving Bengals’ Campbell That Chesire Cat Grin,” The Sporting News, December 7, 1974: 51.

15 Colbert hit a pinch-hit, solo home run leading off the top of the ninth in an August 22, 1975, game at Dodger Stadium. His homer ended Doug Rau’s shutout bid and tied the game, 1-1. Montreal won the game 3-1 on a two-run home run by Larry Parrish in the 12th inning.

16 Gene Mauch was fired after the 1975 season. One of the reasons for his termination was his reluctance to use young players like Gary Roenicke. Jonah Keri, Up, Up & Away: The Kid, The Hawk, Rock, Vladi, Pedro, Le Grand Orange, Youppi!, The Crazy Business of Baseball, & the Ill-fated but Unforgettable Montreal Expos (Toronto: Random House Canada, 2014), 95-96.

20 Colbert had an adjusted On-base Plus Slugging (OPS+) of 108 in 49 plate appearances with the Expos in 1976. The only other Montreal players who posted a higher OPS+ with at least as many plate appearances that season were José Morales (120 OPS+ in 165 plate appearances) and Pepe Mangual (113 OPS+ in 270 plate appearances). OPS+ is based on a player’s on-base plus slugging percentage normalized across the entire league. It accounts for external factors like ballparks and adjusts so a score of 100 is league average.