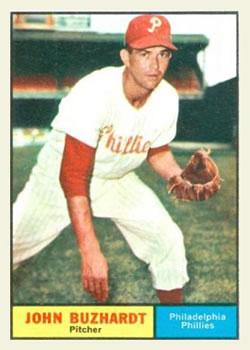 When the Philadelphia Phillies and Milwaukee Braves played a Sunday doubleheader in Milwaukee County Stadium on August 20, 1961, they were headed in opposite directions. The fourth-place Braves were riding a nine-game winning streak, including the first three games of the series with Philadelphia, which left them eight games behind the first-place Cincinnati Reds. The Phillies, buried in last place 42 games behind the Reds, were mired in a 22-game losing streak, more losses in a row than any major-league team in the twentieth century.

The Braves made it 23 losses in a row for Philadelphia—and 10 straight wins of their own—by winning the first game of the double-header, 5-2, behind the five-hit pitching of 40-year-old Warren Spahn. In the second game, the Phillies sent John Buzhardt to the mound, hoping for their first win in almost a month. Trying to extend his team’s winning streak was Braves pitcher Carl Willey.

Buzhardt’s record entering the game was 3-13. One of his three wins was the last Phillies victory, on July 28 against the San Francisco Giants. When asked about his record, Buzhardt explained, “Look, I feel I’m a much better pitcher than the record shows. If I didn’t feel that way, I wouldn’t be around long, and I expect to be around for a while.”1 After the 1961 season Buzhardt pitched seven more years in the big leagues, mostly for the Chicago White Sox. His career ended in 1968 with a 71-96 lifetime record. More than a third of the losses occurred in his two years with the Phillies.

Phillies second baseman Tony Taylor  expressed the team’s mood entering the game, saying, “It’s tough to go to the park each day when all you’re doing is losing, losing, losing. We were looking for ways to lose the game. We knew we had to make the big play but we couldn’t make it. Everything went wrong.”2 Manager Gene Mauch expressed his feelings on the losing streak, commenting, “You try not to think about the losing but you can’t. Everyone keeps asking you about it and the fans on the road and at home know about it.”3

After Willey retired the Phillies in order in the top of the first, the Braves went to bat against Buzhardt. Mauch affirmed how Buzhardt was feeling, stating, “The kid probably felt like he was pitching in the seventh game of the World Series because of all the pressure on us.”4 Leadoff hitter Lee Maye started the inning with a single but was quickly erased on a double-play grounder off the bat of Frank Bolling. Eddie Mathews grounded out and Buzhardt escaped the  inning unscathed.

In the third inning the Phillies had an excellent opportunity to score first. Clay Dalrymple started things off with a single to right, the first of three hits he collected in the game. One of many young players on the team, the 24-year-old catcher was in his second year with Phillies. After Bobby Malkmus popped up to shortstop, Buzhardt stroked a double to deep right-center, sending Dalrymple to third. Taylor followed with a walk, loading the bases with one out. The Phillies could not cash in on the opportunity, though, as Johnny Callison and Tony Gonzalez, two other young players in their second year with Phillies, grounded into force outs at home and second base, respectively.

The Braves plated the first run of the game in the third on a wind-blown home run by number-eight hitter Roy McMillan, but the Phillies responded with two runs in the fourth as a recent Brave led the charge against his old team. Right fielder Wes Covington had played his first five seasons with the Braves, but after starting only five games early in the 1961 season, he was sold to the Chicago White Sox for the $20,000 waiver price. He collected four home runs and 15 RBIs in 22 games with the White Sox but was moved again in an eight-player trade with the Kansas City Athletics. Barely three weeks later he was traded to the Phillies, his fourth team of the year, where he settled in through the 1965 season.

The Phillies had been the last National League team to integrate in 1957 and Covington was the first African-American to realize a significant role with the team.5 Against Willey, he tied the score with a home run to deep right field, his eighth of the season. Lee Walls followed with a double to left field and Dalrymple’s second hit of the game, a single to center, scored Walls with the second run.

In the sixth the Phillies added another run. Walls and Dalrymple hit back-to-back singles, putting runners on first and third. Malkmus’s sacrifice fly scored Dalrymple to extend the lead to 3-1. Mostly a utility player during his six year career, Malkmus was having his best season in 1961. Described as a “glove whiz” he started 55 times at second, 16 at shortstop and 10 at third and served as a defensive replacement on more than 30 other occasions.6 His body of work that season earned him one vote for the MVP Award, the only player on the Phillies to receive that honor.

Buzhardt struck out to end the inning, then strolled to the mound determined to keep the Braves from answering. With one out, pinch-hitter Al Spangler and Maye stroked singles to put runners at the corners, but Buzhardt evaded further trouble by inducing Bolling to ground into another double play. After the Phillies went quietly in the seventh, one-out singles by Henry Aaron and Joe Adcock put Braves on first and third. Frank Thomas hit an apparent double-play grounder to second, but Taylor bobbled the ball, allowing Aaron to score. It was a one-run game with two runners on, but Buzhardt came up with another big pitch, getting catcher Joe Torre to pop up for the third out.

The Phillies broke the game open in the eighth, playing sound fundamental baseball. Don Demeter started the rally with a base hit, and Ken Walters was sent up to bat for Covington with instructions to advance Demeter to second. Squaring to bunt, he fouled off two pitches, then stroked a single to center, giving the Phillies runners at first and second with no outs. Walls hit a possible double-play grounder, but Walters slid hard into second and Walls, hustling down the line, beat the throw to first. First baseman Adcock complained bitterly to the umpire, but the call stood. Provided a new opportunity, the Phillies took advantage. Dalrymple walked, loading the bases, Malkmus singled to score Demeter, Buzhardt’s bunt scored Walls, and Taylor’s single scored two more for a 7-2 lead.

The Phillies were up by five runs but Buzhardt had to survive two more hazards. In the eighth, a walk, ground-out, and single scored a run, with the heart of the Braves batting order approaching. Bolling flied out and Mathews walked, bringing Aaron to the plate. Aaron—who had collected his 250th career homer five days earlier—hit a fly ball to deep center field, but Gonzalez tracked it down to end the threat. Adcock led off the bottom of the ninth with his 26th home run of the season to make the score 7-4. Buzhardt recovered to set down Thomas and Torre, but with two outs Felix Mantilla singled. Gino Cimoli pinch-hit for relief pitcher Johnny Antonelli; he hit a grounder up the middle, forcing Mantilla at second for the final out. The 23-game losing streak was over!

Were the Phillies feeling jittery in the ninth? “I wasn’t worried,” said Demeter with a smile. “But when Felix Mantilla got that hit, I worried a little. What if Cimoli squibs one through, I kept thinking.”7 Covington, one of the veteran players, spoke for the team when he said “Now that the consecutive losses are at an end, our guys can relax.”8 Mauch added, “I’m glad to get that monkey off my back. It’s been a long, long, time.”9 A crowd of about 500 showed up at the airport in the rain at 1 A.M. to greet the team returning to Philadelphia. Malkmus was touched, stating, “It’s really encouraging and I think it helps to know the people are behind us.”10 Walls echoed, “This might shake everybody up, all those people coming out in the rain.”11

Reflecting later on the game and the losing streak, Taylor said, “We were a young team. We knew there were better days ahead.”12 Six Phillies starters in this game were 26 years old or younger, and after making changes in the off-season, the team improved to an 81-80 record in 1962. That season was the first of six straight with winning records.

With the record-breaking losing streak behind them, the team celebrated. “It was a good feeling in Milwaukee when we finally won,” Taylor said. “It was like we won the World Series.”13

Rob Neyer, host of the weekly SABRcast podcast, always queries his first-time guests about their earliest baseball memory. If I was asked, my response would be that as a 6-year-old I followed the Phillies 23-game losing streak in 1961. Sometime during the streak, I started a tally sheet to keep track of the consecutive losses. I kept the sheet under my pillow and each night I would record a mark until the streak ended on August 20.