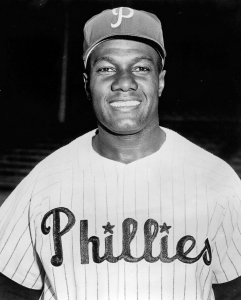 In the top of the eighth inning of a game between the Philadelphia Phillies and Brooklyn Dodgers at Roosevelt Stadium in Jersey City1 on April 22, 1957, with his team behind by two runs and runners at second and third with one out, Phillies manager Mayo Smith sent out John Irvin Kennedy to run for veteran Solly Hemus at second base.

With that act – 10 years and one week after Jackie Robinson broke baseball’s color barrier – Philadelphia became the last team in the National League to integrate. The Phillies, an organization notorious for their resistance to integration and for their abuse of Robinson when he broke in, had finally put a Black player on the field.2

John Kennedy was a veteran of the Negro Leagues who had also spent one full season, 1953, in minor-league baseball with a New York Giants affiliate, the St. Cloud (Minnesota) Rox of the Class C Northern League.3 He spent the next two seasons with the Birmingham Black Barons. A solid 1956 season with the Kansas City Monarchs (.385 with 17 home runs) got Kennedy an invitation to 1957 spring training with the Phillies.4

The Phillies were under pressure at home to integrate. The demographics of the city were changing and the neighborhood around the Phillies’ home field, Connie Mack Stadium, was rapidly transforming from one containing predominantly European immigrants to one that was predominantly African Americans. The city’s branch of the National Association for the Advancement of Colored People and the Philadelphia Tribune, the city’s premier Black newspaper, campaigned for the integration of the team.5

With veteran Granny Hamner being moved to second base after a shoulder injury, the Phillies were in the market for a shortstop. Kennedy’s performance at short in spring training led them to believe they may have found a replacement. Kennedy hit .333 for the spring and made just one error in the field, while showing the ability to make the double play.

Phillies scout Bill Yancey compared Kennedy to Chicago Cubs star Ernie Banks, with an “easy swing” that would make him one of the best hitters in the league.6 Teammates seemed to like him. He told the Philadelphia Bulletin that his fellow players had been “wonderful.”7 Perhaps they were, but Kennedy was forced to live in a private home separate from his teammates and eat alone in restaurants. “It would have been nice if I had a roomie, but I go to the movies a lot and read, and somehow the time passes between games and workouts.”8

The newspapers reported that Kennedy was 23 years old.9 In reality, he was 30. He played years of semipro ball in his hometown of Jacksonville, Florida, before beginning a professional career at age 24 in 1951. It was not unusual for ballplayers of the era to shave a few years off their age, and it is not clear whether Kennedy lied to the Phillies about his age or just let the team believe he was younger, but at some point, whether it was concern about his age or an arm injury he suffered near the end of the spring, the team decided that Kennedy was not their answer at shortstop. On April 6 they signed Kennedy to a major-league contract, but on the same day, they traded five players and $75,000 for a highly touted Dodgers shortstop, Humberto “Chico” Fernandez.

The smooth-fielding Fernandez was immediately installed as the Opening Day shortstop and Kennedy was relegated to the bench, where he stayed for the first five games of the season. Ironically, after the Phillies and the press had touted Kennedy as the first Black player for the Phillies, Fernandez, a Cuban, became the first player of color to take the field in a Phillies uniform. As a Latino, however, Fernandez was not credited with breaking the Phillies’ color barrier, even though he was subjected to the same separate housing and eating facilities as Kennedy.

The April 22 game was a Monday day game between the 2-3 Phillies and 4-1 Dodgers in front of 11,629 fans. Right-hander Jim Hearn, now with the Phillies after an offseason trade ended his seven-season tenure with the New York Giants, got the start.10 His mound opponent was Dodgers right-hander Roger Craig. The Dodgers were coming off another pennant-winning season, their fifth in eight years, while the Phillies were fielding a crop of rookies at several positions as they sought to replace some of the aging Whiz Kids of 1950.

The game was scoreless through four innings, even though Hearn was in constant trouble. The Phillies turned three double plays to help hold the Dodgers off the scoreboard. One of the double plays was spectacular. With one out and the bases loaded in the fourth, Brooklyn’s Don Zimmer launched a pop fly to shallow center field. Fernandez raced out from short to catch the ball but after making the catch was knocked to the ground by on-charging center fielder Richie Ashburn. Fernandez then scrambled to his feet and threw a strike to catcher Stan Lopata to nip Carl Furillo trying to score from third.

The Phillies’ failure to turn yet another double play led to the Dodgers’ breakthrough in the fifth. With one out and two men on, Duke Snider rolled a tailor-made double-play grounder to Hemus at second base. Hemus tossed to Fernandez at second for one out, but first baseman Ed Bouchee dropped the relay. Furillo followed with a line double to left that scored two for a 2-0 Brooklyn lead.

Another Bouchee error helped the Dodgers pad their lead in the sixth. Jack Meyer had relieved Hearn, and Zimmer walked with one out, Meyer’s pickoff throw beat Zimmer to the bag, but Bouchee failed in a lunging attempt to apply the tag and was charged with an error. Craig then sacrificed Zimmer to second, from where he scored on Jim Gilliam’s hit, pushing the Dodgers’ advantage to 3-0.

The Phillies got one run back in the seventh thanks to their three rookie starters. Bouchee led off with a walk and was singled to second by new left fielder Harry Anderson. After veterans Willie Jones and Lopata made outs, rookie right fielder Bob Bowman drove home Bouchee with a single.

The Phillies threatened again in the eighth. With one out, Ashburn singled and moved to third as Hemus followed with a double. Dodgers manager Walter Alston removed Craig from the game in favor of ace reliever Clem Labine.

As Labine warmed up, John Kennedy came out of the dugout for his history-making appearance, running for Hemus at second base. The rally fizzled out, however, as Labine got Bouchee to dribble one in front of the plate that Roy Campanella handled for the second out and then got Anderson to pop to short, ending the inning.

The Dodgers added two insurance runs in the eighth inning off Phillies reliever Turk Farrell and Labine retired the Phillies in order in the ninth to preserve Craig’s win. The final score was 5-1.

John Kennedy’s pinch-running appearance was the first of only five appearances he made for the Phillies. He was 0-for-2 as a pinch-hitter, scored a run in another pinch-running appearance, and played four innings at shortstop, turning a double play and making an error. Kennedy was sent to the minor leagues in early May. He spent four years in the Phillies minor-league system, but never played in the majors again.

After retiring from professional baseball, Kennedy returned to his hometown of Jacksonville, where he raised his five children with his wife, Betty. Betty died in an auto accident in 1978. Kennedy continued to play baseball into his 70s in a local over-40 league.11

In an interview in 1997, a year before his death, Kennedy told Sports Illustrated’s Mark Kram that he figured he could have lasted in the majors if he had been born 10 or 15 years later. “Either that or I was with the wrong team. If I had come up with a team that had an established black player in place, that could have helped.”12

3 Kennedy also played 10 games with the Albany Senators, who did not have a major-league affiliation, in the Eastern League in 1951. Kennedy thus started his professional career in “organized” baseball and then moved to the Negro Leagues before joining a major-league roster.