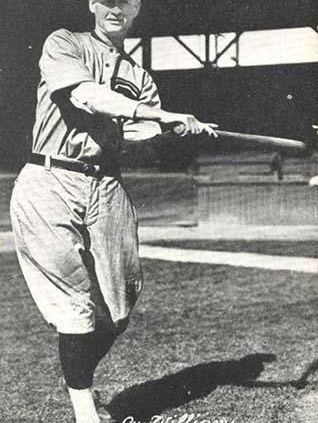 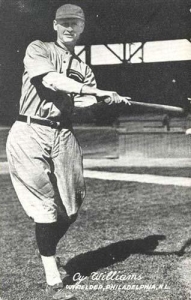 The Chicago Cubs and Philadelphia Phillies, two teams firmly entrenched at the bottom of the National League standings, squared off in an unlikely pitchers’ duel at the Baker Bowl in Philadelphia on August 22, 1921. Fans who attended were treated to a “herculean pitching battle”1 fought by two unlikely mound combatants, journeymen slingers Elmer Ponder of the Cubs and Jesse Winters of the Phillies. The two pitchers dueled well into extra innings and the game ended only when Phillies slugger Cy Williams lofted a Ponder pitch over the high wall in right field for a walk-off home run in the 12th inning, giving the Phillies a 2-1 win.

The 28-year-old Ponder had been added to the Chicago roster in a trade with the Pittsburgh Pirates on July 1. In four seasons with the Pirates—only one of which, 1920, was a full campaign at the major-league level—he had compiled a 14-21 record with a 2.74 ERA. The 1921 season would be his last in the major leagues.

Winters, too, was new to the Phillies pitching staff, having arrived from Toronto of the International League in a July 10 trade with the New York Giants. Winters, 27, had been with the Giants for parts of two seasons, compiling a 1-2 record with a 4.24 ERA. He pitched for three years with the Phillies, registering a 12-22 record and a 5.23 ERA. Despite the dubious credentials of these pitchers, the two hooked up in a classic pitchers’ duel that for Winters, at least, would be the greatest game of his career.

The Cubs were managed by longtime Phillies and Cubs catcher Bill Killefer, who had taken over for Johnny Evers earlier in August. Killefer’s lineup on this day was undistinguished at best. The best players were probably shortstop Charlie Hollocher and catcher Bob O’Farrell, each of whom had solid major-league careers, Hollocher’s cut short by illness.2 Phillies manager Kaiser Wilhelm, he of the unfortunate nickname,3 had taken over managerial duties in July from Wild Bill Donovan. He also fielded a starting lineup of mostly castoffs and second-tier players. Two of his better players, first baseman Ed Konetchy and outfielder Curt Walker,4 were laid up by injury (Konetchy) and illness (Walker), so slugging center fielder Cy Williams was the only major offensive threat in the Phillies lineup.

Winters opened the game with a scoreless inning, working around a Zeb Terry two-out single. In the bottom of the first, the Phillies scored an unearned run off Ponder. Second baseman John Monroe led off with an infield single and advanced to second on Dots Miller’s single to right. Bevo LeBourveau put down a sacrifice bunt to move Monroe and Miller each up a base. Catcher O’Farrell attempted to pick Monroe off third but threw wildly, allowing Monroe to score. Ponder limited the damage by striking out Lee King and inducing Cliff Lee to fly out to Max Flack in right field.

Both pitchers then sailed along until the fifth inning, when the Cubs matched the Phillies’ run with an unearned run of their own. George Maisel led off with the only walk Winters allowed in the game. Ray Grimes sacrificed Maisel to second, and after O’Farrell flied out, Ponder grounded to short, where shortstop Frank Parkinson threw the ball wildly into the home dugout, allowing Maisel to come around and tie the game at 1-1.

Meanwhile, the Phillies had lost two more players to injury. Second baseman Monroe suffered a split finger fielding a groundball in the third inning and was replaced by Jimmy Smith. In the fourth, catcher John Peters also split a finger on a foul tip and was replaced by rookie Butch Henline. Henline doubled off Ponder with one out in the bottom of the fifth and advanced to third on Smith’s single, but the two substitutes died there when Miller grounded out.

Winters worked around singles by Hollocher and Turner Barber in the sixth, and the Phillies just missed a scoring chance in the bottom of the inning. LeBourveau led off with a walk but was picked off first by catcher O’Farrell. King reached on an error by Hollocher and went to second as Lee grounded out to first. Williams slashed a single to right, but Flack threw King out at the plate to end the inning.

From that point on, both pitchers were nearly untouchable. Winters gave up four harmless singles over the next six innings but Ponder was even better. All the Phillies could show for their next six at-bats was two walks.

As the game moved to the 12th inning, each team had one unearned run. The Cubs had seven hits, the Phillies six. Winters and Ponder were still on the mound. Winters had never pitched more than nine innings in a game before. Ponder had done it once, a 13-inning shutout of the St. Louis Cardinals the year before. The Cubs went down in the 12th with only a harmless one-out single by O’Farrell.

Against Ponder in bottom of the 12th, Williams worked the count to 3-and-1. On the next pitch he “shot one of Ponder’s select curves high and dry over the right field wall”7 and on to Broad Street. As he rounded the bases, Williams was met by a “joyous handful who slapped the former Notre Dame star8 on the back with every step.”9 That “joyous handful” were no doubt pleased that they would now get home in time for dinner.

2 Hollocher’s story is a particularly tragic one. Early in his career he was often compared with the greatest shortstop of the era, Honus Wagner. He played seven seasons in the major leagues, but never achieved his full potential and eventually had to retire at the age of 28 because of a strange stomach ailment. In 1940, at the age of 44, he died by suicide.

3 Irvin Key Wilhelm despised the nickname Kaiser. Apparently, opponents used the name as a taunt and then reporters picked it up and it stuck. For the record, Wilhelm was born in Ohio and was no relation to the former German emperor.

4 Walker had been recently acquired by the Phillies in a straight-up trade with the New York Giants for Irish Meusel. Walker was a decent player, but Meusel went on to help the Giants to four straight World Series appearances, including championships in 1921 and 1922.

5 Many people consider the 1918 trade that sent Williams to Philadelphia and brought Dode Paskert in return to be one of the worst ever by the Cubs. Paskert was 36 and past his prime and Williams was just coming into his own. Sixty-five years later things would even up when the Cubs received Ryne Sandberg from the Phillies as a throw-in in the Ivan DeJesus trade. See Cappy Gagnon, “Cy Williams,” SABR BioProject, https://sabr.org/bioproj/person/cy-williams/, accessed on March 10, 2021.