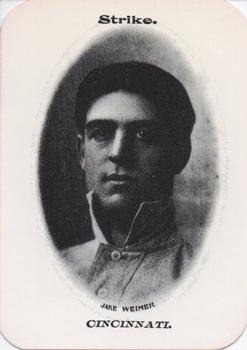 A torrential rainfall postponed the second game of a three-game set between the Brooklyn Superbas and Cincinnati Reds in August 1906. “Such a storm has seldom been seen in these parts,” observed the Cincinnati Enquirer.1 The two clubs decided to reschedule the game for the next day as part of a doubleheader. They agreed in advance that the second game would be limited to seven innings so the Superbas could catch a train to St. Louis.

The twin bill featured two second-division teams going in the wrong direction. Skipper Ned Hanlon’s Reds had lost 16 of their last 24 games to drop to fifth place (49-64), a whopping 33 games behind the league-leading Chicago Cubs. Right behind them were manager Patsy Donovan’s Superbas (42-66), who had lost 11 straight games before taking the first game of the series, 7-4. It was a costly defeat for the Reds, whose ace pitcher, southpaw “Tornado Jake” Weimer, suffered a freak injury. In relief of ineffective starter Chuck Fraser in the sixth, Weimer ripped the fingernail off his left middle finger attempting to catch a return throw from his batterymate, Admiral Schlei.2 Weimer was expected to miss several days.

After the rain, a heat wave descended upon the Queen City, bringing sweltering temperatures in the low 90s and oppressive humidity for the Friday afternoon doubleheader, the fourth in the team’s 13-game homestand.3 A sparse crowd of 1,500 spectators were scattered in the Palace of the Fans, the grand ballpark with its neoclassical grandstand adorned with Greek and Roman columns, located at the intersection of Findlay Street and Western Avenue.

In the first game, the Reds took an early 1-0 lead before the Superbas viciously pounded their starter, spitballer Bob Ewing. Cincinnati sportswriter Jack Ryder noted that Ewing “was injuriously affected by the heat and had nothing like his usual stamina” and that his “salivated sphere” lacked its typical control and speed.4 The Superbas scored six unanswered runs, highlighted by Harry Lumley’s home run, and won 6-4.

Slated for the abbreviated second game was Weimer, despite his swollen middle finger from the series opener. Tornado Jake took the league by storm as a 29-year-old rookie with the Cubs in 1903, posting a 20-8 record. Another 20-win season followed in 1904. With their surfeit of pitchers, the Cubs shipped Weimer, the oldest hurler on their seven-pitcher staff, to the Reds after the 1905 season to fill their most glaring weakness, third base. They received Harry Steinfeldt, who manned the hot corner as the Cubs won four pennants and two World Series titles in the next five years (1906-1910), and outfielder Jimmy Sebring. Notwithstanding his move from a contender to an also-ran, Weimer entered the game with robust 16-10 record, pushing his lifetime slate to 74-40.

Toeing the rubber for the Superbas was 27-year-old Harry McIntire. The spitballing right-hander had posted an unsightly 8-25 record as a rookie in 1905 and appeared headed to another 20-loss season in 1906. He had taken the loss in all five of his appearances in August, falling to 8-17. He also flashed occasional brilliance. On the first day of the month, he pitched the game of his life, tossing 10⅔ hitless innings against the Pittsburgh Pirates at Washington Park in Brooklyn before yielding a single and three more hits in the 13th inning to lose, 1-0.5

The game unfolded as an unlikely pitchers’ duel. With his “tantalizing tosses,” Weimer mowed down the weak-hitting Superbas, who finished the season ranked sixth of the eight NL teams in scoring (3.2 runs per game) and hitting (.236 batting average). “After the cloudburst came the Tornado,” proclaimed Ryder.6

Weimer began the game by hitting his former Cubs teammate Doc Creamer in the ribs with a pitch.7 Billy Maloney attempted to sacrifice, but Weimer fielded his poorly executed bunt and forced Creamer at second. Maloney was subsequently gunned down trying to steal second. Weimer empathically ended the inning by fanning Lumley for the first of two times in the game. Described as a “great home run hitter,” Lumley had led the NL with nine round-trippers as a rookie in 1904, a number he duplicated in 1906 to finish runner-up to teammate Tim Jordan’s 12.8 The only other Brooklyn baserunner in the game was McIntire himself, who coaxed a two-out walk in the third.

“Jake had it going in every direction with his elusive slants,” declared the Cincinnati Enquirer.9 He didn’t yield a hard-hit ball or require a flashy fielding gem to preserve his no-no. The “hardest chance” of the game, opined the newspaper, was Weimer’s one-handed, yet routine catch of Jack McCarthy’s liner in the fifth inning.

McIntire pitched “gelt edged ball,” wrote the Brooklyn Citizen, but had the “bad misfortune” of running into the Tornado.10 Through the first six innings, McIntire yielded only three baserunners. Reds captain Joe Kelly, winding down his Hall of Fame career, which began at age 19 with the 1891 Boston Beaneaters, connected for a one-out single in the first, but was thrown out attempting to swipe second. Two innings later, Snake Deal singled to right and moved to third on Weimer’s single, but McIntire extinguished the Reds’ rally by inducing Miller Huggins to pop up to second base and Kelly to fly out to center.

As the game entered its seventh and final inning, it looked as though it might end in a tie. Weimer breezed through the heart of the Superbas’ lineup, retiring Maloney, Lumley, and Jordan (fanning Lumley).

In the bottom of the seventh, the Reds had one last chance to pull out a victory against McIntire. After Frank Jude popped up for the first out, Jim Delahanty singled. Hans Lobert followed with what appeared to be a routine double-play grounder. The Superbas forced Delahanty at second, but the relay to first arrived a split second too late to retire Lobert for the game’s final out. The Reds seized the opportunity. Homer Smoot, batting just .230 since being acquired from the Cardinals in a trade for Shad Barry, swung at McIntire’s first pitch and pounded the spitter into the left-center-field gap. Lobert took off, “circling bases like a frightened deer,” wrote Ryder.11 Lobert crossed the plate before the Brooklyn outfielders retrieved the ball, scoring the winning run and ending the game in a brief 1 hour and 8 minutes. It was a “tough game to lose” for both McIntire and the Superbas, lamented the Standard Union.12

Contemporary box scores credited Smoot with a triple, but Ryder reported that once Smoot saw Lobert score, he “passed second base and then broke for the clubhouse.”13

Smoot had the game-winning hit, but Weimer was the story of the game. Tornado Jake fanned four and walked one to record his fourth shutout of the season. His gem was the third no-hitter of the season. Coincidentally, each involved the Superbas. The Philadelphia Phillies’ Johnny Lush beat them on May 1, while the Superbas’ Mal Eason tossed a no-hitter against the Cardinals on July 20. Weimer’s no-hitter turned out to be the only one in the 10-year history of the Palace of the Fans.

Weimer’s no-hitter was in the record books for 85 years until September 1991, when the Committee for Statistical Accuracy, chaired by Commissioner Fay Vincent, altered the definition of a no-hitter to include only those games that last at least nine innings and end with no hits. An estimated 36 abbreviated no-hitters were removed from the ranks, including Weimer’s. Also deleted were games in which a pitcher yielded a hit in extra innings after allowing no hits over nine innings, depriving McIntire’s 1906 gem against the Pirates of no-hitter status.

Weimer took the mound two days later in the second game of a doubleheader against the second-place New York Giants. Once again the game was scheduled to go only seven innings, so the visitors could catch a train to Buffalo for an exhibition game. Weimer held the Giants hitless through four innings, yielding a single by Bill Dahlen to lead off the fifth and settling for a three-hit shutout.14 He also collected the Reds’ only hit, a single in the fourth, but it did not factor into the scoring. The Reds tallied their only run in the fifth on a walk, an error, a sacrifice bunt, and a sacrifice fly. Weimer finished the season with a 20-14 record, 31 complete games in 39 starts, and a 2.22 ERA in 304⅔ innings.

In addition to the sources cited in the Notes, the author accessed Retrosheet.org, Baseball-Reference.com, and SABR.org:

12 Brooklyn Split Even With Reds; Weimer Did Not Allow a Hit.”