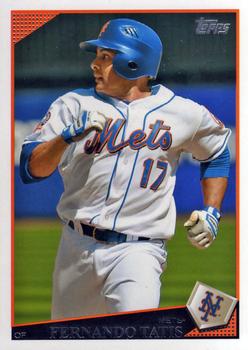 In 1997 and 1998, Fernando Tatis played in 210 games for the Texas Rangers and St. Louis Cardinals, hitting .266 with 19 homers and 87 RBIs. The Dominican native grabbed national attention in 1999 when he made baseball history by hitting two grand slams against Chan Ho Park in one inning on April 23. He rode the momentum of that game to a career year with St. Louis at age 24 in which he hit .298 and hammered 34 homers and drove in 107 runs.

Tatis slipped to .253 with 18 homers and 64 RBIs in 2000 and was dealt to Montreal in December. From 2001 to 2003 he suffered “ailments ranging from a strained rotator cuff to patellar tendinitis to chest inflammation,”1 which resulted in numerous and lengthy stays on the disabled list. He played 208 games for the Expos, batting just .225 with 19 homers and 81 RBIs.

“It felt like it was one thing after another,” Tatis said in 2008. “It was a very frustrating time. The hardest thing in baseball for a player is to get hurt. When you get hurt, that’s it. You’re just not going to be the same player. That’s what happened to me.”2

Out of baseball completely in 2004 and 2005, Tatis spent time with his family while receiving no interest from major-league teams. “There were a lot of moments when I was very disappointed in myself,” he said. “Sitting home in the Dominican, it was very tough for me and my wife and kid.”3

Perhaps divine intervention resulted in his return to the big leagues.

“In my town,” he said in 2008, “we needed to buy land to build a church. And I said to my family, the only way that we can buy the land is if I come back to baseball and make the money to buy the land to build the church for our town. That was the first step.”4

One week later, Tatis received an unexpected call from the Orioles.5 After beginning his career as a third baseman, Tatis returned in 2006 as an outfielder and reserve infielder. He spent most of the season in Triple A but hit .250 with 2 homers and 8 RBIs in 28 games with Baltimore. After an unsuccessful tryout with the Dodgers, he signed with the Mets as a free agent and spent 2007 in Triple A with the New Orleans Zephyrs, where he hit .276 with 21 homers and 67 RBIs.

With Mets outfielders Ryan Church and Moises Alou injured for much of the 2008 season,7 Tatis, now 33 years old, got his chance and took advantage of it. He was called up to the Mets and appeared in his first game on May 13, about one month after the church in the Dominican was completed.8

The Mets were in a tailspin. On the morning of July 26, they led the NL East by two games but had lost six of eight since and were now in third place in the NL East at 53-50, three games back of leader Philadelphia. San Diego was buried at the bottom of the NL West with a mark of 43-69, 14½ games behind first-place Arizona. But they had swept a four-game series against the Mets in June, winning each of the first three games by a score of 2-1.9

The Mets starter, Mike Pelfrey, was just 9-7 with a 3.91 ERA in 21 starts, but he had won seven of his last eight decisions. The Padres countered with Chris Young. He was 4-4 with a 4.12 ERA in 11 starts; he was making just his second start after missing more than two months with a nasal fracture and laceration to his nose.10

The starting pitchers kept the game scoreless through three innings. Pelfrey worked around two-out singles by Brian Giles in the first and Jody Gerut in the third. Young walked 23-year-old Daniel Murphy – playing in just his third major-league game – and Carlos Delgado in the first but struck out Carlos Beltran to end the threat. The only other baserunner was a two-out walk to Murphy in the third.

Pelfrey retired the first two in the fourth before running into trouble. Kevin Kouzmanoff homered to left. Chase Headley and Nick Hundley singled before Luis Rodriguez flied to left to end the inning. The Mets tied the score in the bottom of the fourth when Tatis blasted his 100th career homer to left with two outs.

Pelfrey ran into more trouble in the sixth. Adrián González hit a solo home with one out to put the Padres up. Kouzmanoff and Headley followed with singles but Pelfrey retired Hundley and Rodriguez to keep the score 2-1.

With one out in the sixth, Young issued a walk to Delgado. Mike Adams came in to pitch for the Padres.

After Beltran grounded a single to right field, Tatis belted a 2-and-2 pitch down the left-field line. When the ball landed in the stands right of the foul pole to put New York up 4-2, he pumped his fist emphatically and raised his index finger when he rounded first base.11 It was Tatis’s first two-homer game since September 16, 2000.

Tatis savored the moment as he reached the plate and received a curtain call from the crowd of 52,130. “To hear my name chanted at Shea Stadium,” he said later, “I can’t describe what I am feeling. It’s amazing because I thought that what was happening to me right now wasn’t going to happen.”12

The Mets increased their lead to 5-2 in the seventh against Padres reliever Clay Hensley when Argenis Reyes walked and scored on Murphy’s first major-league hit, a double to left-center.

New York tacked on another run in the bottom of the eighth against Justin Hampson. Beltran singled with one out. Tatis came to the plate with the crowd chanting his name once again; this time he flied out to center field. But 22-year-old rookie Nick Evans followed with a double. Beltran raced to third and scored on a throwing error by Gerut.

With a 6-2 lead Mets manager Jerry Manuel handed the game over to Aaron Heilman, filling in for All-Star closer Billy Wagner, who been placed on the disabled list hours earlier with a strained forearm.13

Heilman had struggled all season as a set-up man – he was 1-6 with a 5.25 ERA in 58 games. He had particularly struggled in his previous four appearances, in which he was 0-3 and allowed seven runs and 12 hits in 6⅓ innings.

He was greeted by boos from the crowd when he took the mound and did nothing to improve the situation when he walked Hundley and gave up a single to Rodriguez. One out later, Gerut homered to cut the Mets’ lead to 6-5.

Joe Smith relieved and retired Tadahito Iguchi. Left-hander Scott Schoeneweis earned the save14 by getting Giles to fly to center for the final out.

“You always want to go out there and help your team win,” said Heilman after the game. “I didn’t do a good job at that tonight.”15

“You have a four-run lead and need to get three outs, and I wasn’t able to do that,” he added. “Smitty and Scotty did a great job of picking me up.”16

“We needed to win a game, regardless of how we won it,” commented Manuel after the game.

The win started a hot stretch for the Mets in which they won 24 of 34 games to take a 3½-game lead in the division with 17 games to play. But they wilted down the stretch, winning just seven games to finish three games back of the Phillies and miss the playoffs. It was the second straight September collapse for the Mets; the previous season they had blown a seven-game lead with 17 to play to finish one game back of the Phillies.

Tatis’s season ended early when he injured his shoulder diving for a ball on September 16 against the Nationals. He finished the season batting .297 with 11 homers and 47 RBIs in 92 games and won the Comeback Player of the Year Award. The next season he batted .282 with 8 homers and 48 RBIs in 125 games for the Mets. His career ended in 2010 when he hit just .185 in 65 at-bats.

The author attended this game with his family during a vacation to New York City, which also included a tour of Yankee Stadium and a game at Yankee Stadium between the Angels and Yankees. This was his only visit to Shea Stadium.

9 It was the first time in Mets’ history they had lost three consecutive 2-1 games. Before playing the Mets, the Padres had won the last game of the previous series against the Cubs, 2-1. They were the first major-league team ever to win four consecutive games by a 2-1 score. Ben Shpigel, “Mets Caught in Loop of 2-1 Losses in San Diego,” New York Times, June 8, 2008.

14 It was the Mets’ first save in 2008 by anyone other than Wagner. It was also the ninth and final save of Schoeneweis’s 12-year career.