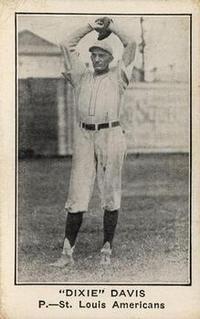 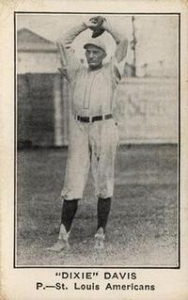 It was a “marvelous exhibition of skill and stamina,” gushed D.C. sportswriter Denman Thompson about the St. Louis Browns’ Dixie Davis’s 19-inning complete-game victory over the Washington Senators.1 Another capital city scribe, Jack Nye, suggested that “Davis appeared to gain strength as the game proceeded,” overcoming six initial shaky frames to settle down and hold the hometown squad hitless over the last nine.2 The game was “a thrilling battle,” exclaimed the Washington Herald.3

The Senators and Browns were in the midst of their most competitive stretch of ball all season as they prepared for the third game of a four-game set. Skipper George McBride’s Nationals (59-50) were firmly ensconced in third place, propelled by a recent 11-game winning streak, all but one of those victories coming on their current 17-game homestand. Manager Lee Fohl’s fourth-place Brownies (49-54) had won 14 of their last 20.

Toeing the rubber for the home team was 32-year-old left-hander George Mogridge, a former swingman, acquired from the New York Yankees in the offseason, whose surprising 13-8 slate (2.59 ERA) pushed his career record to 64-71. His opponent was Dixie Davis, a slightly built 30-year-old right-hander who was “supposed to be a physical weakling,” claimed sportswriter Louis Dougher in the Washington Times.4 The 5-foot-11, 150-pound twirler had failed in cups of coffee with three different teams in the 1910s before sticking with the Browns in 1920, going 18-12 and completing 22 games, proving that he was anything but fragile. The North Carolinian had struggled somewhat thus far in ’21, posting a 5.17 ERA and splitting his 20 decisions.

A sparse crowd of 3,138 paid spectators was on hand at National Park (renamed Griffith Stadium in honor of the club’s owner and longtime pilot Clark Griffith in 1920) on a Tuesday afternoon between first-division aspirants.5

This game was a synthesis of Deadball and Liveball Era tactics. It combined daring baserunning, double steals, and attempted steals of home with the increased offense and contact of the modern game. The teams combined for 36 hits (23 by the Browns), including nine triples, but no home runs. The early innings suggested that neither hurler would last long. The Browns tallied in the opening frame when Frank Ellerbe tripled and scored on George Sisler’s single.6 The Senators responded on Joe Judge’s triple and Sam Rice’s sacrifice fly and then took the lead, 2-1, in the second on Frank O’Rourke’s single to plate Bucky Harris.

The game also featured shoddy defense, including eight errors. Mogridge committed one of the Senators’ five miscues to begin the third when he “insisted on taking [Luke Stuart’s pop-up] almost out of Judge’s hands,” wrote Nye, and let the ball drop.7 Ellerbe eventually drove in Stuart to tie the game. The Browns took a 4-2 lead moments later when Baby Doll Jacobson blasted a bases-loaded single to drive in Ellerbe and Dixie Davis.8

After the Nationals squandered Sam Rice’s two-out triple in the third, they began a furious rally in the fifth. Mogridge singled and scored on Judge’s second three-bagger. Two batters later, second baseman Marty McManus fielded Rice’s grounder and caught Judge in a rundown. The sequence ended when Rice twisted his ankle in an attempt to avoid Ellerbe’s whip throw, and he had to leave the game, replaced on the bases by Frank Brower.

The Browns’ sloppy fielding resulted in the Senators taking the lead in the sixth. With Howie Shanks on first, Patsy Gharrity hit a tailor-made 6-4-3 double play grounder, but Sisler could not corral McManus’s wild throw to first, resulting in a two-base error. When O’Rourke followed with a single to shallow left, Ken Williams made an ill-advised throw home to nab Gharrity. The ball sailed into the stands and the game was tied. Two batters later, Judge’s third triple in as many at-bats plated O’Rourke to give the Senators a 5-4 lead.

Battered and seemingly on the verge of breaking, Davis had yielded 10 hits and five runs (four earned) through six innings, but then found his rhythm, holding the Senators scoreless in the next three frames while his teammates tallied a game-tying run in the top of the ninth, courtesy of slapdash fielding. With McManus on third via a triple, Jack Tobin grounded to short. According to the Washington Herald, O’Rourke had an easy play at the plate, but he fumbled the ball and then threw low as McManus slid safely.9 The Senators escaped defeat in regulation when Brower snared Ellerbe’s liner and doubled up Tobin on second to send the game into extra innings.

In what was described as a “nerve-racking battle,” it appeared as though the Browns might blow it open in the 10th.10 Sisler led off with a triple, then scored on Williams’s single. After Jacobson sacrificed, Hank Severeid hit a Texas Leaguer to short center, sending Mogridge to the showers. In relief came 30-year-old right-hander Jose Acosta. Standing just 5-feet-6 and weighing 130 pounds, the Cuban-born spot starter almost saved the day for the Nats. The inning ended when Williams was thrown out at home on a daring double steal.

“[T]hings looked gloomy for the Griffs,” opined Nye about the bottom of the 10th after Davis registered two quick outs.11 After Shanks drew a free pass, Gharrity tied the game, 6-6, on a triple.

In the final nine frames, Davis clamped down, holding the Senators hitless, though he did walk three. His only hairy situation occurred in the 16th when O’Rourke led off with a walk and moved to second when Sisler muffed Acosta’s bunt. On third with two outs, O’Rourke attempted a daring game-winning steal of home but was thrown out.

While Davis hung up zeroes in Washington’s hit column, Acosta dodged bullets. McManus led off the 11th with a single but was picked off first, prompting a heated protest by Browns coach Lefty Leifield, who was ejected by first base umpire Frank Wilson. Tempers were just beginning to heat up, though. McManus’s miscue proved costly when Tobin beat out a two-out roller, followed by Ellerbe’s single before Sisler was retired. The Browns squandered Severeid’s one-out triple and Tobin’s two-out double, in the 12th and 13th respectively.

A “near riot,” reported Nye, occurred in the 16th on a baserunning blunder which would have been a heart-wrenching gaffe had the Browns lost.12 No slouch with the bat, Dixie Davis blasted a deep fly to the jury box in left field. On the relay throw, second baseman Bucky Harris made a “wild heave,” according to Nye, to try to nip the hurler sliding into third.13 The ball sailed over Shanks’s head and into the visitors’ dugout, and Dixie ran home to give the Brownies what appeared to be a 7-6 lead. An astute O’Rourke called for the ball and tagged second while making his case to umpire Wilson that Davis had failed to touch with bag. After a short discussion, Wilson called Davis out. The Browns bench erupted, noted Denman Thompson, and the players “protested with such vehemence that for a time physical violence seemed imminent.”14 Eventually ordered was restored.

Contemporaneous newspapers reported that it was getting difficult to see that ball by the beginning of the 17th. After two scoreless frames, the fateful 19th began with Sisler, the reigning big-league batting champ (.407 in 1920), picking up his sixth hit (five singles and a triple). Then Williams drew a walk. Jacobson smashed a single to drive in Sisler and took second when left fielder Bing Miller fumbled the ball. Acosta intentionally walked Severeid to load the bases and play for an inning-ending twin killing. Wally Gerber hit a grounder to O’Rourke for the force at second, but the latter’s throw to first was too late. Williams scored to give the Browns an 8-6 lead.

The game finally ended after 3 hours and 45 minutes when Davis set down the side in order in the 19th.

The next day Davis’s name and picture graced the front page of sports sections in newspapers across the country. In 19 complete innings, he faced 74 batters, fanned eight, walked five, and yielded 13 hits, not to mention tossing nine hitless innings to end the game. It was easily the longest game in his eventual 10-year big-league career, during which he went 75-71 and logged 1,318⅔ innings. (He pitched at least 10 innings on seven other occasions.)

The 19-inning contest set a record for the longest game in Senators history in Washington, surpassing the 18 innings on May 15, 1918, when Walter Johnson went the route against the Chicago White Sox’ Lefty Williams in a 1-0 victory. It tied the longest game in Senators history, a 5-4 win over the Philadelphia Athletics on September 27, 1912, when Eddie Plank went the route in a tough-luck loss.

In addition to the sources cited in the Notes, the author accessed Retrosheet.org, Baseball-Reference.com, SABR.org, and The Sporting News archive via Paper of Record. A partial inning-by-inning summary is found in “Joe Judge Gets Trio of Triples Off ‘Dixie’ Davis,” St. Louis Star and Times, August 9, 1921: 13.

6 According to Nye, Sisler had an RBI single; however, Thompson reported that Ellerbe scored on Mogridge’s wild pitch. Neither Retrosheet or BaseballReference provides a play-by-play description of the game.

8 Davis had executed a sacrifice bunt to the first-base side, but Judge’s poor throw to second was late, and both he and Stuart were safe.

14 Thompson, “Davis Vanquished Nationals in 19 Innings by Remarkable Display of Skill and Stamina.”