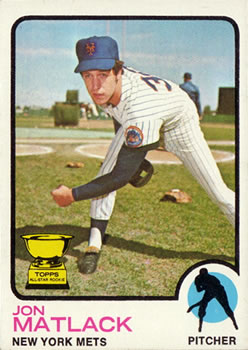 The New York Mets entered July 1973 in the National League East cellar. Some sportswriters started to write off the Mets’ chances after they went 20-31 in May and June. Red Foley of the New York Daily News wrote on July 10 that with the team 12 games out of first place, “it’s all downhill from here,” adding, “Not since 1968, when they finished 16 games below the median, has a Met entry displayed as much negative arithmetic as the current squad.”1

After New York started July with just two wins in its first nine games, sportswriters started to wonder if manager Yogi Berra was on the verge of being fired. Amid this turmoil and uncertainty, club President M. Donald Grant met with the players before their July 9 game against the Houston Astros, standing like “George Washington rallying his troops at Valley Forge.”2

Grant gave the team “an executive pat on the head” and told the players that he and the owners had confidence in Berra as well as the team. Grant said he realized that they had suffered multiple injuries, but that the players would not be there if the management didn’t believe in them. “When you’re losing, you like to know how things stand,” said pitcher Harry Parker afterward.

In the middle of Grant’s speech, reliever Tug McGraw began shouting, “Ya Gotta Believe!” as he marched around the locker room. “A lot of the guys were a little shocked,” said Ed Kranepool, who was McGraw’s road roommate at the time. “Some of us thought Tug was mocking Mr. Grant, which he wasn’t. It was Tug being his flamboyant self.”34 After the pep talk, the Mets went out and beat the Astros 2-1 in 12 innings behind solid pitching from Tom Seaver and a bullpen that limited Houston to just two hits in the final five innings.

Jon Matlack took the mound for the Mets in the second game of the three-game series. The southpaw had suffered a serious injury on May 8 when Atlanta’s Marty Perez lined a shot that hit him in the forehead and fractured his skull. Matlack, the 1972 Rookie of the Year, had to be carried off the field; many feared it might be the end of his career. But he returned 11 days later.

“A couple of inches lower and I’d have needed major surgery,” Matlack said after throttling the Astros. “I was told that it would be doubtful I’d ever pitch again if that had happened. Now there’s no effect. I’m not ducking, I’m not flinching, not closing my eyes.”5

Matlack had lost three of his first four starts after returning from the injury. He won four of his next six games. During that stretch he had an ERA of 2.11 and struck out 35 batters while giving up just 11 earned runs. He had won his last outing, pitching six innings in the Mets’ 7-3 win over the Montreal Expos on July 5.

Matlack looked strong from the start, retiring the Astros in order through the first five innings. He said afterward, “I was able to get the ball down and keep them off stride. I got them to hit ground balls, which is what I wanted.”6

During that five-inning span, Houston hit just two balls out of the infield, a pair of fly balls in the fifth inning. The second one, a line drive hit by Lee May, was the closest the Astros came to a hit during that stretch, but right fielder Rusty Staub caught the ball over his head right in front of the outfield wall.

“I thought that Staub had taken a homer from him at the time but after watching the video replay I realize it wasn’t out of the park. Either way it was a good catch,” said Matlack.7

Houston started Jerry Reuss, who entered the game with an 11-5 record. The last time he pitched was two days earlier, relieving in the final two innings of the Astros’ 9-7 come-from-behind win over Montreal.

Reuss limited the Mets to only a single second-inning run. After he walked leadoff batter Staub, Berra called for a hit-and-run, which prevented a double play when Cleon Jones grounded to shortstop. With Staub on second, Duffy Dyer singled up the middle to score Staub with what would turn out to be the game’s only run.

“That hit-and-run broke up a double play,” said Berra after the game. “Otherwise we might still be playing.”8

Reuss allowed just five more hits over the next six innings, but his efforts were no match for Matlack’s performance. Matlack continued to send one Astro after another back to the dugout as he pitched a perfect game through the fifth.

Matlack got a boost from the defensive work of shortstop Bud Harrelson during that stretch. Harrelson had returned to the lineup the previous night after being injured. The shortstop handled six groundballs for outs through the first five innings, including two groundballs in the first inning for the final two outs of that frame. “I like getting the ball early in the game,” he said. “I’m not a nervous person but I want some action early in the game, so I can relax and concentrate on my hitting.”9

Houston batters finally spoiled Matlack’s perfect game in the sixth. Tommy Helms hit a liner down the third-base line. Wayne Garrett made a diving attempt to catch the ball but it just escaped his glove.

“He hit a curve, which wasn’t a bad pitch,” said Matlack. “The pitch was down and in. He waited for it good and hit it good. It was eight inches fair. … I didn’t have time to moan about it. I’ve got a one-run lead, the tying run on second and none out. I’ve got to leave him standing somewhere on the bases.”10 Matlack got the next three batters out. First Skip Jutze grounded out to short, then Matlack struck out the next two batters to leave Helms stranded on second.

With his perfect game and no-hitter chances ended, Matlack walked an Astro in both the seventh and eighth. But neither runner made it into scoring position.

Reuss also limited the Mets’ offense as he scattered six hits and five walks. The left-hander, who ended up with his sixth loss, had to take consolation in pitching well. “I don’t throw things when I lose 1-0,” he said. “I pitched good. He pitched great. He got the one break. A ball took a little bit of a bad hop. That’s going to happen. That’s baseball. Tell Matlack he pitched a helluva of a game. Tell him I’ll get him next time.”11

Matlack finished the night by striking out the Astros in the ninth, bringing his total to seven for the game. “I was really tired,” he said. “I was tired but I was still throwing good.”12 But he added that the win was “my biggest game so far in professional ball.”13

The Mets victory was their second in as many nights. For the moment, talk of firing Berra quieted. The Mets were feeling more confident, due especially to the work of their pitchers. “When they’re on – Seaver, Matlack, Jerry] Koosman when he was 5-0 – it’s easy to play behind them. You have an idea where the ball is going to be hit.,” said Harrelson14

Matlack expressed optimism about the Mets’ fortunes: “Looking better already. The breaks, now instead of going against us, are going for us. They can’t go against you all the time.”15

The one-hitter was the 10th by a Mets pitcher. Matlack was the second Mets left-hander to throw one. The other one was Al Jackson, who beat the Astros16 2-0 on June 22, 1962, the Mets’ first season.

The Mets eventually turned things around. They went 18-14 in August to climb out of the National League East cellar. During the final month of the season – with McGraw’s “Ya Gotta Believe” now their rallying cry – New York went 19-8 and slowly rose in the standings. They took over first place in the division on September 21 behind Seaver’s victory over the Pirates.

Matlack pitched well the rest of the season. After his one-hitter, the left-hander went 7-6 with a 3.03 ERA and 109 strikeouts. In the postseason, his victory in Game Two of the National League Championship Series helped the Mets beat the Cincinnati Reds for the pennant. Matlack was 1-2 against the Oakland A’s in the World Series, which Oakland won in seven game.

4 After Grant left the locker room, Kranepool urged McGraw to tell Grant that his outburst was meant as a means of support for his pep talk. The Mets were inconsistent for the next two months. But when the team began to win in September, McGraw used every opportunity to shout “Ya Gotta Believe!” whenever the team was successful. Marty Noble, “Starting to believe? Recall Mets of 1973,” MLB.com, August 4, 2015. https://www.mlb.com/news/1973-mets-coined-ya-gotta-believe-mantra/c-141082310.