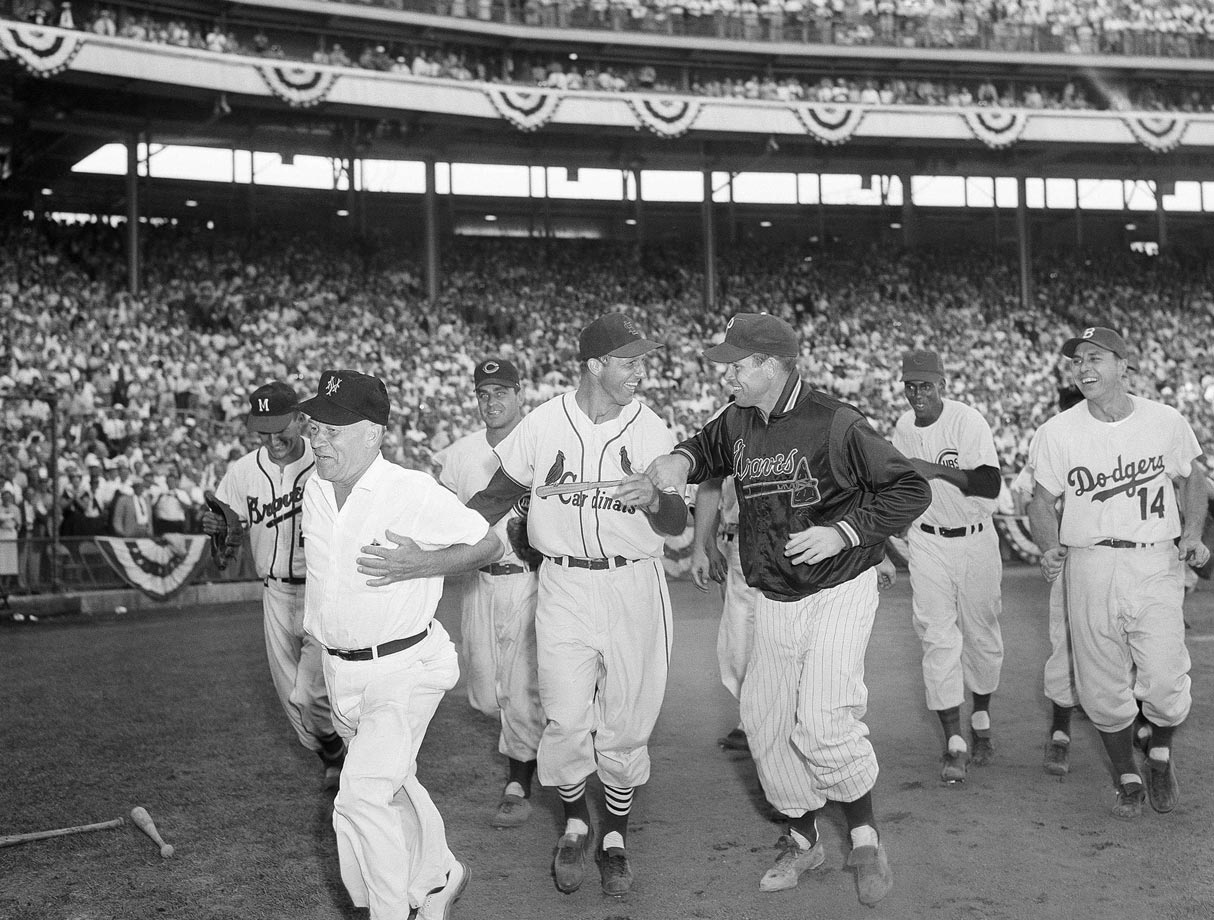 From the day in 1953 when the National League’s Braves arrived in Milwaukee and took up residence in County Stadium, until the early 1960s, there was never a shortage of crowds. Indeed, for six consecutive seasons the Braves led the league in attendance. So when in the summer of 1954 baseball awarded the 1955 All-Star Game to Milwaukee, there was little doubt that the fans would turn out in droves for Milwaukee’s first experience with the national pastime’s annual spectacle.

As the day of the game arrived, excitement in Milwaukee was palpable. The following day, one reporter vividly recounted the city’s festive atmosphere, writing, “All-Star fever settled on downtown shoppers. … Traffic dwindled at game time and pedestrians settled in front of TV sets in department stores, shops, hotel lobbies and bars.”1 So caught up in the event were some Milwaukeeans that newspapers reported of an elderly shopper, standing at a bus stop and listening to the game on her portable radio. “After a long wait at the bus stop, she became engrossed in the game and, when the bus arrived, she missed it.”2 A highly anticipated exhibition, the All-Star Game was “a new high in Milwaukee’s short but fabulous big league history.”3

Game day, July 12, dawned bright and clear, and it remained that way throughout the afternoon, creating a perfect day for baseball: warm sun, low humidity, and clear skies. On the field, the pregame gathering resembled little more than a mob scene, as “[n]ewspapermen, photographers and baseball dignitaries by the hundreds, plus the inevitable gate crashers, swarm[ed] over the premises.”4 In the stands, not a seat was empty. The previous year, the stadium’s seating capacity had been increased from 36,011 to 43,091;5 yet somehow, on this day a crowd announced at 45,3146 jammed into every nook and cranny of the sparkling, two-year-old facility.

In the crowd on the field, Brooklyn Dodgers owner Walter O’Malley, standing with Braves president Lou Perini, gazed at the packed stands and inquired, “How do you explain the phenomenal attendance of this town? What’s the secret?”

To which Perini responded, “There’s no secret formula. It’s just terrific enthusiasm. All the people here have something in common in the team. The priest talks about the Braves to the rabbi; the mechanic to the industrialist, the housekeeper to the butcher.”7

It was undoubtedly that sentiment that compelled 75-year-old Calvin Smith, from Stevens Point, Wisconsin, to stick around after he collapsed in the grandstand before the game. As medical personnel sought to place Smith in an ambulance and take him to the hospital, he refused to go, insisting simply, “I don’t want to leave.”8 In the end, Smith stayed.

Such was the enthusiasm that afternoon in Milwaukee.

As was customary, the two managers, Al Lopez for the American League and the National League’s Leo Durocher, joined the umpires at home plate for a pregame conference, and then called their respective teams from the dugouts to stand at attention along the first- and third-base lines. This was the 22nd meeting of the two leagues’ stars, but this edition was especially poignant. Twenty-two years before, Chicago Tribune sports editor Arch Ward had launched the first All-Star Game, in Chicago. Three days before this game, Ward had died, so everyone in attendance observed a moment of silence in his memory. When the respectful silence was ended, home-plate umpire Al Barlick hollered, “Play ball!”

Perhaps there was some degree of foreshadowing when before the game the scoreboard on the upper third-base stands displayed “American 7, National 6.” For a while, it seemed that the hint of an American League victory in this National League ballpark might prove prescient. Robin Roberts took the mound as starter for the senior circuit, and the American League offense immediately struck. After singles by the game’s first two batters, Harvey Kuenn and Nellie Fox, a wild pitch by Roberts allowed Kuenn to score from third. Ted Williams walked and cleanup hitter Mickey Mantle blasted a home run to straightaway center field. The American League led, 4-0. Roberts stiffened over the next two innings and escaped any further damage. He left the game after the third inning.

Meanwhile, American League starter Billy Pierce was brilliant. After the White Sox’ star surrendered a leadoff single to Red Schoendienst in the bottom of the first, Schoendienst was thrown out trying to steal, and Pierce set down the next eight batters he faced, including three on strikeouts. When he, too, left the game after three innings, the American League’s 4-0 lead remained intact.

Over the next two innings, Early Wynn of the American League and the National League’s Harvey Haddix matched zeroes. In the top of the sixth, however, the AL struck again. After Wynn stranded runners at the corners in the bottom of the fifth to preserve the 4-0 lead, Haddix got the first out in the sixth and then allowed a single to Yogi Berra and a double to Al Kaline (whose drive caromed off third baseman Eddie Mathews’ wrist), with Berra stopping at third on Kaline’s hit. When the next batter, Mickey Vernon, pulled a sharp grounder to first, Berra trotted home with the AL’s fifth run. Haddix struck out the next batter, Jim Finigan, to end the inning and bring his afternoon to a close.

If a 5-0 deficit with nine outs remaining was daunting for the NL, it certainly wasn’t insurmountable given their explosive offense. As things turned out, though, Willie Mays’ defense may have played the most pivotal role in the game’s outcome. In the top of the seventh, Don Newcombe took over on the mound for the NL. With two outs and a runner on first, Ted Williams blistered a drive deep to the wall in right-center field. With impeccable timing, Mays leaped, caught the ball over the wall, and brought it back in for the final out. The two runs he saved would be crucial to the final score.

As luck would have it, Mays led off the bottom of the seventh inning; the appreciative fans gave him a round of applause for his defensive gem. Whitey Ford now took the mound for the AL. With just four hits over six innings off Pierce and Wynn, the NL was undoubtedly glad to face a new hurler, and Ford took the brunt of their renewed attack. After Mays singled, Ford retired the next two batters, but then walked Henry Aaron. When Milwaukee’s own Johnny Logan singled, Mays scored the NL’s first run, and then Stan Lopata reached on a throwing error by shortstop Chico Carrasquel, which scored Aaron. After seven, the score was 5-2.

In the top of the eighth, the AL loaded the bases with two outs against new hurler Sam Jones, who walked two and hit a man, but Joe Nuxhall struck out Ford to end the threat.

The bottom of the eighth brought more of the same against Ford. After the first two men grounded out, Mays, Ted Kluszewski, and Randy Jackson each singled to pull the NL within 5-3. So with Aaron due up and runners at first and second, Frank Sullivan was summoned in relief. Yet, the onslaught continued.

When Aaron singled to right field, Kluszewski scored. However, as Jackson ran to third, Kaline’s throw nicked him, and the ball caromed past third baseman Al Rosen. When Jackson scored, the game was tied, 5-5. It stayed that way until the bottom of the 12th inning.

Nuxhall had been fabulous in relief for the NL. After bailing out Jones in the eighth, he pitched the next three innings, allowing just two hits and striking out five. In the top of the 12th the Reds’ left-hander gave way to the Braves’ Gene Conley, who entered to a raucous greeting from the home crowd. Conley struck out Kaline, Vernon, and Rosen in succession. So the game went to the bottom of the 12th.

For the AL, Sullivan returned to the mound. Despite allowing the NL’s tying runs in the eighth, which had been charged to Ford, the 6-foot-7 Sullivan had pitched well, stranding baserunners in the 9th and 10th and setting the side down in order in the 11th. Now, Stan Musial led off for the NL. As he arrived in the batter’s box, Musial told catcher Berra, “Boy, that ball is tough to see out there. You can’t pick it up in all those shadows.” Also, he said, “I’m tired.”9

“You’re tired!” responded Berra, who’d caught the whole game. “What about me? We’re all tired.”10

On Sullivan’s first offering, which he later recalled as “a lousy pitch, a fastball, high and a little inside”11 (Musial said the pitch was belt-high), Musial swung and drove the ball into the right-field bleachers. Immediately, the NL players erupted on their bench, yelling and dancing in celebration of the NL’s fifth win in six years.

Here in Milwaukee, it was probably appropriate that Conley, the Braves pitcher, got the win.