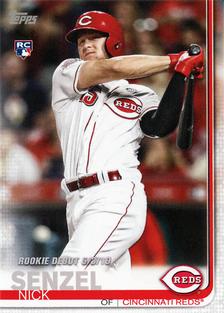 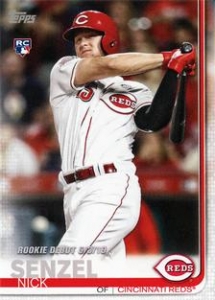 As baseball has shifted to the “three true outcomes” in the twenty-first century,1 triples have become an endangered species.2 A game with five triples3 stood out as an exception in 2019. Yes, the game was at Coors Field, and yes, the score shows that the game was a slugfest, but the Reds hadn’t hit five triples in a game since 1929 – nine decades earlier.

The triple-heavy game, played during the first weekend after the All-Star break in 2019, almost didn’t happen. A spectacular summer storm moved in with lightning and hail after the pitchers had warmed up. Three hours and eight minutes later, play finally started – with the same scheduled starting pitchers. This was Cincinnati’s (41-47, last in the NL Central4) only trip of the season to Colorado, and a Sunday doubleheader a day later, on a getaway day, seemed worse than a game starting after 9 P.M. The Rockies were 45-45, third in the NL West, but already 13½ games back of the Dodgers, so their only realistic hope for the postseason was a wild-card berth.5

Denver native Kyle Freeland (2-6, 7.13 ERA) was hoping to get his career back on track after a stint in Triple A. In his third major-league season, all with the Rockies, he was sent down on May 30 to try to recover the form that had him fourth in the NL’s Cy Young Award voting in 2018. An 8.80 ERA in Triple-A Albuquerque didn’t sound promising, but in his last start6 he had allowed only one run over seven innings.

Freeland started out on the right foot, when a double play erased Nick Senzel’s leadoff single. He followed with a strikeout of Eugenio Suárez for a quick top of the first.

Cincinnati’s Tanner Roark (5-6, 3.51 ERA) was making his 200th major-league appearance. It did not start well. Charlie Blackmon opened the first with a broken-bat single, with part of the bat flying past Roark. Blackmon took second on Trevor Story’s fly out and scored on David Dahl’s single; Dahl moved up on right fielder Yasiel Puig’s wild throw home.

Nolan Arenado followed with a two-run home run just inside the left-field foul pole. Daniel Murphy doubled off the out-of-town scoreboard in right, then scored the fourth run of the inning on Raimel Tapia’s single to left. The Rockies had a chance for an even bigger inning, but Phil Ervin threw out Tapia trying to stretch his hit into a double. Ervin’s outfield assist limited the damage caused by Ryan McMahon’s subsequent two-out single – and was the first big play of a memorable night for the Reds outfielder, who celebrated his 27th birthday two days later.

The Reds cut the lead in half in the second. Puig, ignoring the booing crowd, bunted for a single (perhaps assisted by the wet grass). Ervin blooped a single to put two on. José Iglesias hit a comebacker – Freeland got the throw to third to get the out there, but Iglesias beat Arenado’s off-line throw to first. José Peraza’s single got the Reds on the board. Iglesias took third on Peraza’s single, putting him in position to score on Curt Casali’s fly out and reduce the Rockies’ lead to 4-2.

The triples started in the top of the third. Senzel was credited with the first one when the ball bounced off left fielder Tapia’s glove. Senzel scored on Joey Votto’s single. Blackmon robbed Puig of a one-out hit by leaping into the right-field wall to make the catch. Ervin drove in Votto with the tying run on his third triple of the year, taking third easily when center fielder Dahl dived and slid past the ball.

In the bottom of the third, Dahl doubled off the top of the wall in left field. By the time the Reds tracked down the ball, he had cruised into second. Arenado’s single gave the Rockies the lead back, 5-4. Murphy singled to center; Arenado rounded second, fell, and just made it back to second before the tag on Senzel’s throw in. The Colorado third baseman’s “swim move” was successful – after review it was determined that he had only been brushed by the laces of Peraza’s glove, which by major-league rules doesn’t count as a tag.7 Still, Roark got out of the inning with no further damage with a fly out and a double play.

Peraza hit the Reds’ third triple to start the fourth, taking advantage of Puig’s bobble after the ball bounced high off the right-field wall. Casali’s sacrifice tied the game, 5-5. Roark hit a comebacker and jogged about 10 feet down the line before heading to the dugout. Senzel hit his second triple8 of the game, into the right-field corner, but was left on third when Votto flied out.

Roark collected two strikeouts and a groundout for a 13-pitch bottom of the fourth.

Chad Bettis replaced Freeland on the mound in the top of the fifth. All he allowed was a double for Ervin’s third hit of the game.

Story gave the Rockies the lead back in the bottom of the inning with his 20th home run – which cleared the seats and bounced on the concourse. Two batters later, Murphy hit another solo home run and practically skipped around the bases. The ball was caught by a fan in the first row of the left-field seats so the Reds asked for a crew-chief review to check for fan interference. (Ervin had leapt and reached over the wall, but was inches short of a catch.) The review upheld the home-run call so the smiling fan kept the ball.

After Roark walked Tapia and allowed an infield single to McMahon, he was pulled in favor of Jared Hughes with two on and two out. Hughes got a fly out to end the inning with the Rockies ahead 7-5.

In the top of the sixth, Bettis allowed singles to Peraza and Casali. Pinch-hitter Derek Dietrich9 homered into the tunnel beyond the left-field corner, giving the Reds the lead, 8-7 (and getting Roark off the hook for the loss). Senzel followed by doubling into the right-field corner. This time Blackmon got the ball in quickly enough that Senzel didn’t have a chance for his third triple of the game. Bettis stalled the rally by catching Votto’s line drive and doubling Senzel off second.

But the Reds kept coming. Suárez tripled high off the scoreboard. That was the fifth triple for the Reds – the first time they had that many in a game since June 5, 1929.10

Jairo Díaz took over the pitching with two outs and a runner on third. Puig joined the homer-fest with a two-run shot to left to mixed boos and cheers, adding to the Reds’ lead at 10-7. Ervin singled for his fourth hit of the game and took second on a wild pitch. Pinch-hitter Jesse Winker walked; Peraza, batting for the second time in the inning, grounded into a force play that finally ended the five-run frame.

David Hernández, who had blown the save for the Reds the previous night, nearly blew another lead in the bottom of the sixth. He walked Garrett Hampson, who stole second and scored on Blackmon’s single. Blackmon took third on another bad throw by Puig. Reds manager David Bell replaced Hernández with Michael Lorenzen, who allowed a run on Dahl’s groundout, cutting Cincinnati’s lead to 10-9, but retired the side.

Casali homered off the Rockies’ fourth pitcher, Jake McGee, to open the seventh. There were plenty of cheers from the stands as the percentage of remaining Reds fans increased as evening gave way to morning.11 After Senzel worked a one-out walk, Votto doubled. It was his 390th career double, passing Dave Concepción to take third place on the Reds career leaderboard.12 Suárez walked to load the bases. Puig made it a four-RBI game with a two-run double. A change of pitchers didn’t help the Rockies – Carlos Estévez allowed Ervin’s two-run single, and the Reds had their second five-run inning in a row.

Wandy Peralta had just returned from the Injured List. He looked fine on the mound in the bottom of the seventh with a 15-9 lead, allowing only a leadoff walk to Murphy.

The sixth Rockies pitcher of the game, Bryan Shaw, started the ninth by catching Votto looking at strike three. Votto argued and got tossed by home-plate umpire James Hoye. After Suárez walked, Puig singled to right for a four-hit night. Ervin’s single, his sixth hit, tied the team record for hits in a game by a player.13 Peraza’s two-out single scored Cincinnati’s final two runs: 17-9, Reds.

Robert Stephenson wrapped up the pitching for the Reds. All he allowed was a single to Murphy, who had reached base in all five plate appearances.

The Reds accumulated 24 hits in the game – their most since a franchise-record-tying 28 hits on a 1999 visit to Coors Field.14

This article was fact-checked by Thomas Brown Jr. and copy-edited by Len Levin.

In addition to the sources cited in the Notes below, the author consulted Baseball-Reference.com and Retrosheet.org for pertinent information, including the box scores.

2 Jake Mintz, “Why the Best Play in Baseball Is Dying, and Who Can Bring It Back,” foxsports.com, September 17, 2021. https://www.foxsports.com/stories/mlb/triples-dying-art-dexter-fowler-david-peralta-jazz-chisholm-jake-mintz. Retrieved December 21, 2021.

3 Details at https://stathead.com/tiny/6He7T. Although there have been a few games with five triples in the twenty-first century, all the games with more than five occurred before 1926.

4 They improved to fourth in the NL Central, finishing 16 games behind the Cardinals.

5 They did not get it. They won only six games in July, skidding to fifth place, where they ended the season.

9 Apparently his warm-up worked – during the rain delay he was showing off on social media by doing curls using one of the Reds’ video staffers as the weight.

10 The Reds beat the Phillies 21-4. Oddly enough, the leadoff hitter in both games had two of the five triples. The leadoff hitter in 1929 was speedster Evar Swanson, collecting two of his 12 triples of 1929, which was good enough for eighth in the National League.

11 The official attendance was 43,650. Between the three-hour weather delay, the long game, and the two 5-run innings for the visitors, the author estimates that only 15 percent of the crowd was there by the end. The Cincinnati broadcasters had no trouble finding Reds fans in the stands.