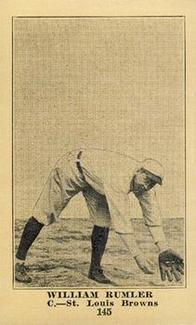 William Rumler and Eddie Plank roomed together when the 1917 St. Louis Browns traveled for road games.1 It seems like an odd pairing. Rumler was 26 years old, nearly anonymous, and a bench warmer; Plank was 41, well known to sports fans across the country, and – although past his prime – one of the premier left-handed pitchers in baseball history. On July 17 at Sportsman’s Park in St. Louis, Rumler doubled with two out in the ninth inning to give his famous roomie a 3-2 win over the reigning two-time World Series champion Boston Red Sox. The win boosted the Browns out of the cellar, and into seventh place by 3 percentage points.

Plank had been released by owner-manager Connie Mack after Philadelphia’s loss in the 1914 World Series, and he joined the Federal League’s St. Louis Terriers for the 1915 season. As a Terrier, Plank again was a 20-game winner (21-11), and became the first left-handed hurler to reach 300 career wins.

After the Federal League folded, Phil Ball, owner of the now-defunct Terriers, purchased the Browns before the 1916 season, bringing Plank and several other Terriers with him. Plank won 16 games, and the influx of talent boosted the Browns to a winning record for the first time in eight years. In 1917 Plank was still pitching effectively for St. Louis, although not as frequently.

Rumler spent the entire 1914 season as a reserve catcher with the Browns. He appeared in only 34 of their 159 games (with 6 ties), including 18 appearances as a pinch-hitter. Rumler was in the minor leagues in 1915 and most of 1916 before rejoining the Browns. Rumler hit .324 and drove in 10 runs in 27 games after returning to St. Louis in late July, a performance that earned him a 1917 roster spot.

The July 17 match between Boston and St. Louis featured teams at opposite ends of the American League standings. Boston’s record was 50-31, placing it just a half-game behind the league-leading Chicago White Sox (51-31). The eighth-place Browns (32-52) trailed the seventh-place Athletics (29-47) by one game.

This was the fourth game of a five-game series. Boston swept a doubleheader on July 15 behind the pitching of Babe Ruth and Herb Pennock. The Browns took the third contest 2-0, and hoped to even the series with Plank (3-3) on the mound.

The Red Sox selected left-hander Hubert “Dutch” Leonard (9-9) to oppose Plank. Leonard – age 25 – was in his fifth season with Boston. He owned a lifetime mark of 75-50, and had chalked up a World Series win in each of the last two fall classics.

Boston struck for a first-inning run after left-handed-hitting Harry Hooper started the game with a single to right field. Jack Barry attempted to sacrifice Hooper to second; when both first baseman George Sisler and Plank charged the bunt,3 and Browns second baseman Del Pratt failed to cover first base, both runners were safe. Del Gainer bunted them to second and third, and Larry Gardner’s outfield fly scored Hooper.

Boston scored its second run in the third inning. Hooper again ignited the Boston rally, this time by lining a ball down the right-field foul line and legging out a double. He scored on consecutive groundouts by Barry and Gainer to make it 2-0. Boston was poised to increase its lead when Gardner hit a two-out triple off the foul pole in right field,4 but Duffy Lewis grounded to Browns shortstop Doc Lavan, ending the threat.

St. Louis began a comeback in its half of the third. With one out, Burt Shotton singled and stole second base. He scored on Tod Sloan’s single over second.

Boston could not hold its 2-1 lead. Leonard walked the first two Browns hitters in the sixth inning, Shotton and Jimmy Austin – the latter on just four pitches. Sloan beat out a dribbler down the third-base line to load the bases with no outs.

The crowd groaned when Sisler fanned on a bad pitch for the first out, but Hank Severeid popped a single into center field to bring home Shotton with the tying run and keep the bases loaded. Pratt struck out, and Baby Doll Jacobson “made the agony complete when he tapped a puny bounder to Leonard.”5

Leonard and Plank remained locked in a 2-2 tie entering the bottom of the ninth. Beginning with Lewis’s grounder to end the third inning, Plank had retired the final 19 Red Sox he faced; without a Boston hitter getting a ball out of the infield. As a St. Louis newspaper described it, “Plank slow-balled the Red Sox to destruction.”6

Despite Plank’s mastery of the Red Sox, victory was proving elusive. The Browns had been reaching base against Leonard, but lacked the timely hits needed to take the lead. Now, in the ninth, St. Louis was sending up the weak-hitting bottom third of its batting order.

Jacobson was retired for the first out. Lavan sent a long fly ball to center field, and Boston’s Tillie Walker, playing shallow for the light-hitting Lavan, raced back, got his hands on the ball, but could not hold it. Lavan pulled up at second base with a double.

Plank was the next scheduled hitter, and Browns manager Fielder Jones did not hesitate to let him bat. Plank fouled to the catcher for the second out.

The stage was set for Rumler. “The square-shouldered Nebraskan”7 was summoned to pinch-hit for Shotton, and it was almost certain Rumler would be swinging away. As Clarence F. Lloyd of the St. Louis Star and Times noted, “He is drawing a salary to sit on the bench and watch the game when the Browns are in front, and to go up and hit when the Browns are behind and a run or two are needed.”8

Leonard fired his first pitch over the plate, “and Rumler uncoiled,”9 sending the ball on a line all the way to the left-field fence between the outfielders. Head down, and “full speed ahead[,]”10 he raced to third base. Since Lavan needed to cover just two bases to score the winning run, Rumler was credited with a double. The St. Louis Post-Dispatch asserted that Rumler knew so little of the game situation that he initially was unaware the contest had been won. He remained on third base, and was slow to join the other players walking off the field.

The win was Plank’s fourth of the season and the 325th of his career. He won just once more that summer, and retired before the season ended. In 1946 he was posthumously enshrined in the National Baseball Hall of Fame.

Leonard’s record fell to 9-10, and he ended the year 16-17. The Red Sox finished second in the American League, nine games behind the Chicago White Sox. St. Louis finished seventh, 1½ games better than Philadelphia.

The season’s end also marked the end of Rumler’s days as a major leaguer. From 1914 to 1917 he had played in 139 games with the Browns, entering 106 of those contests as a pinch-hitter. This game was perhaps his finest hour.

Rumler continued to earn a living from baseball as late as 1932.11 He won the Pacific Coast League batting title (.362) in 1919. In 1920 the PCL suspended Rumler on gambling allegations, a decision confirmed by the National Association of Professional Baseball Leagues. He played semipro baseball for teams in North Dakota, Minnesota, Wisconsin, and Ohio, until he was reinstated in December 1928. Rumler returned to the PCL in 1929 at age 38, and tied for his second batting crown by hitting .386.

The author consulted Baseball-Reference and Retrosheet.org for box scores, and other pertinent data.

2 The Athletics also won the American League pennant in 1902, the year before the inaugural World Series.

3 According to the St. Louis Star and Times, Plank fielded the ball. The Boston Globe credited Sisler with fielding it. “Elderly Eddie Is Sox’ Master,” Boston Globe, July 18, 1917: 8. Both newspapers agree Pratt should have been at the bag to take a throw.

11 Terry Bohn, “William Rumler,” SABR BioProject, https://sabr.org/bioproj/person/william-rumler/. Bohn does an excellent job of detailing Rumler’s post-major-league career. The information in this paragraph comes from his article.