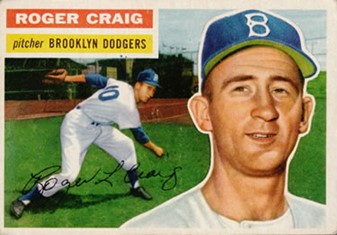 They fill the extra spaces in the sports pages of a newspaper, but the story is only partially told. These fillers speak of many types of transactions, among them player purchases, options, trades, recalls, releases, and signings. They are the facts and speak little of the hopes, dreams, frustrations, and disappointments of the players involved and what might be in store for their baseball careers.

When baseball fans opened the New York Times sports section on Saturday morning, July 16, 1955, they read of Don Newcombe’s 15th victory of the season, 12-3 over the St. Louis Cardinals, and his sixth home run of the season, tying the major-league record for homers by a pitcher.2 Tucked away after Roscoe McGowen’s account of the game was one such transaction: “In an effort to bolster their crippled pitching staff, the Dodgers bought the contracts of two right-handers, Don Bessent from St. Paul and Roger Craig from Montreal. Each is 24 years old.”3

The 1955 Dodgers had a torrid start, winning their first 10 games. An 11-game winning streak brought their mid-May, first-place record to 25-4. Perhaps they were destined for another National League pennant after a one-year absence, but the franchise’s first World Series title was still the elusive dream. As they readied for a Sunday doubleheader on July 17, the Dodgers’ 60-27 record put them 12½ games ahead of the second-place Milwaukee Braves.4

Thank goodness for a big lead. Injuries were taking their toll on the Dodgers. Their pitching staff was plagued with sore arms – Carl Erskine, Karl Spooner, Johnny Podres, and Billy Loes were all sidelined or pitching in pain.5 Position players weren’t immune from injury. Roy Campanella had returned three days earlier from a left-knee ailment to get five hits in two games against the Cardinals, but a bruised left hand meant the catching duties for this doubleheader would fall to Rube Walker and Dixie Howell, who in turn were also hampered by nagging injuries.6 Jackie Robinson, nursing a bruised left knee, watched the doubleheader from a box seat next to Dodgers President Walter O’Malley.

Through the injuries, Dodgers manager Walter Alston had to be pleased about getting substantial contributions from his bench. Don Hoak took over the third-base job while Robinson rested his ailing left knee. Entering the doubleheader, Hoak had batted .317 with 6 runs batted in and 15 runs scored in 15 games since July 2.7

Like Hoak, Don Zimmer was in his second season in the big leagues and waiting for his opportunity at shortstop, but Alston needed him at second base to replace a slumping Jim Gilliam. He also delivered. In the 13 games from July 1 to the All-Star break, Zimmer batted .321.8 As the Dodgers prepared to play their fourth doubleheader in July, Hoak and Zimmer were penciled into the starting lineup throughout and nothing spoke more of Alston’s confidence in them.

The Dodgers had opened the four-game series at Ebbets Field against the Cincinnati Redlegs with a Saturday afternoon 5-4 win, as Duke Snider hit two home runs, including a ninth-inning walk-off against Hersh Freeman. As fans read the accounts of the game in their Sunday morning newspapers, they could anticipate the significance of the day’s doubleheader: Two rookie pitchers were about to make their major-league debuts.

With a game-time temperature into the 90s, Roger Craig was first to the mound in the opener for the Dodgers, facing veteran pitcher Gerry Staley (5-5, 4.31 ERA) in the first game of the Sunday doubleheader. Craig’s journey to the big leagues took some time after he signed with the Dodgers as a 20-year-old before the 1950 season. Two years of military service and a broken elbow put him back at Class B Newport News in 1954, where he had won 14 games in the 1951 season.9 He progressed rapidly and began the 1955 season with the Triple-A Montreal Royals. Craig was now ready, having pitched to a 10-2 record for the Royals, mostly as a starter.

Some sloppy fielding let Craig down in the early going, but the Dodgers’ power bats were up to the task against Staley. In the top of the first inning, Bob Thurman lined one to left-center. When  Snider and Jim Gilliam, now playing in left, deferred to each other fielding the ball, a single became a triple. Ted Kluszewski lined a hit off Craig’s right forearm with no ill effect and the Redlegs led 1-0.10 In the bottom half, Snider and Gil Hodges hit solo home runs and the Dodgers led 2-1.

For Snider, his 31st home run of the season was his third in the last two games. In fact, Snider had three home runs in four consecutive at-bats in this series, having executed a sacrifice bunt in the other plate appearance. In those days, even home run sluggers could bunt!

Craig suffered from bad fielding behind him again in the second inning.11 Bobby Adams singled to left with one out. Roy McMillan hit a sure double-play ball to short but Pee Wee Reese’s throw to Zimmer at second was wide and the Redlegs now had runners at second and third. When Zimmer charged Staley’s grounder, the ball bounced off his chest, allowing one run to score. Game tied 2-2.

As it turned out, Adams’ single in the second was the last Redlegs hit of the game. Craig had to pitch through five walks in the middle three innings, but that’s when the Dodgers showed their support at the plate. Carl Furillo hit a solo home run in the fourth. After Zimmer was hit by a pitch and stole second base, Rube Walker’s double to right gave the Dodgers a 4-2 lead.

In the fifth inning, Reese hit the fourth solo homer of the day off Staley for a 5-2 Dodgers lead. The Dodgers added their last run in the sixth the old-fashioned way off reliever Johnny Klippstein – a Furillo walk, a Gilliam sacrifice bunt, and a Zimmer single to center. By this time, it made little difference that Snider had to leave the game in the sixth inning with an upset stomach.12

Craig took care of the rest, retiring the last 12 batters for his first major-league win. There was still a second game to play, but no one was happier than Dodgers manager Walter Alston. One week earlier against the Giants, relief pitcher Clem Labine was being pounded by the Giants in the fifth inning of a 10-2 loss, but Alston, in his second season at the helm in Brooklyn, had Labine finish the inning. Alston lamented, “I didn’t want to leave Labine in. Of course, not. But we’re hurting so badly for pitching I didn’t want to use any more of our tired arms. I’ve never been in such a fix.”13 He was hoping that the three-day All-Star Game break would help.  As it turned out, Craig’s complete-game debut performance served as a great tonic for resting the bullpen.

Craig pitched both as a starter and reliever for the Dodgers for the balance of the 1955 season. His record, 5-3, 2.78 ERA, included three complete games as well as two saves. His interviews with SABR biographer Richard Shook suggest that Craig was most proud of one game in particular, the fifth game of the 1955 World Series.14 Craig pitched six innings of four-hit ball to beat the Yankees 5-3 for a 3-2 World Series lead. We know the rest of that story.15

There was a second game to be played on the way to a singular event in baseball history, a doubleheader sweep by rookie pitchers making their major-league debuts.16 That story is told as Don Bessent completes the debut sweep of Redlegs.

The author accessed Baseball-Reference.com for box scores/play-by-play information (baseball-reference.com/boxes/BRO/BRO195507171.shtml) and other data, as well as Retrosheet.org (retrosheet.org/boxesetc/1955/B07171BRO1955.htm). The Roger Craig baseball card (#63) is from the 1956 Topps series and was obtained from the Trading Card Database.

4 As they prepared for their fourth doubleheader in July, they had already played eight for the season. By season’s end, they had played 18 doubleheaders.

7 Roscoe McGowen, “Hoak Hot with Stick When Given Chance at Hot Corner,” The Sporting News, July 20, 1955: 9. When Robinson returned, he was moved to left field. “Manager Smokey Alston would have benched Hoak with regret – if he benched him at all.”