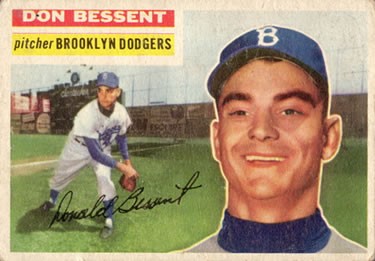 “Sometimes it doesn’t pay to get out of bed. The Reds found this to be true today. Collapsing like a one-horse shay, especially in the finale, they dropped both ends of a sloppily-played doubleheader…”1

In this era, doubleheaders were a regular occurrence on the baseball calendar.2 Many were part of the regular-season schedule, while others were added to make up for rainouts or postponements due to cold weather or darkness. If you were a young baseball fan at the ballpark on July 17, 1955, this Sunday afternoon brought all the joy and double the pleasure for the occasion. If you were Dodgers manager Walter Alston, you could only hope that another Dodgers rookie pitcher, Don Bessent, making his major-league debut, could deliver as Roger Craig had done in the first game, when he pitched a complete-game three-hitter to win his own major-league debut.

As the Dodgers prepared for their fourth doubleheader in July, they had already played eight for the season. The Redlegs’ schedule was even more demanding. They were already playing their 13th doubleheader of 1955. In fact, the Redlegs were in the midst of a 20-game road trip that included five doubleheaders in less than two weeks.3

Don Bessent’s professional baseball career began when the 19-year old signed with the New York Yankees prior to the 1950 season. After two interruptions for military service, a serious back injury, requiring bone-grafting surgery, put his baseball career in jeopardy. The Yankees left him unprotected in the minor-league draft after the 1952 season. The Triple-A St. Paul Saints, the Dodgers affiliate, swooped in, feeling Bessent was a bargain buy for $5,000. Bessent spent 2½ seasons in St. Paul before Alston fulfilled his 1955 spring-training promise that he would be the first man called up to the Dodgers if an emergency presented itself.4 This was an emergency!

Bessent’s opponent on the mound for the second game was rookie pitcher Rudy Minarcin (4-6, 4.54 ERA). Minarcin was being used by Redlegs manager Birdie Tebbetts as both a starter and reliever. One month earlier, he had pitched a complete-game four-hitter against the Dodgers at Cincinnati’s Crosley Field for a 5-2 win.

The Redlegs took an early 1-0 lead against Bessent in the second inning when Wally Post opened with a single to right and scored on Gus Bell’s triple. Bessent settled down, yielding only a walk to Ted Kluszewski and a single by Bell over the next three innings.

Minarcin gave up only two meaningless singles over the first three innings, but a disaster was about to strike the Redlegs in the fourth inning that would incur the wrath of their own manager.

The excitement started innocently enough. With two outs and Carl Furillo on first, Minarcin’s first pitch to George Shuba hit him on the arm. Don Zimmer followed with a single to score Furillo and tie the score at 1-1. Dixie Howell’s slow roller went through third baseman Ray Jablonski’s legs for an error, allowing Shuba to score for the 2-1 Dodgers lead. When Bessent followed with a single to center, Zimmer scored the third run and Howell advanced to second.

The second error of the inning occurred when sure-handed Roy McMillan booted Don Hoak’s routine grounder, scoring Howell with the fourth run. Pee Wee Reese lined a single, scoring Bessent for the fifth run. Hoak and Reese advanced to third and second, respectively, when Bob Thurman booted the ball in left for Cincinnati’s third error of the inning. Tebbetts replaced Minarcin with Steve Ridzik, who promptly wild-pitched home another run before mercifully getting Jim Gilliam on an inning-ending grounder. Six runs on four hits, three errors, one walk, one hit batsman and one wild pitch!

With a 6-1 lead in the sixth inning, Bessent surrendered the Redlegs’ second run. Thurman doubled to left with one out and scored on Kluszewski’s single to right. Brooklyn fans settled back in their seats after the seventh-inning stretch and were treated to the final two runs by the Dodgers. Ridzik walked Reese to open the inning and successive singles by Gilliam, Gil Hodges, and Furillo padded the lead to 8-2.

Any notion the Redlegs had to rally against Bessent in the seventh and eighth innings was quickly snuffed out by double-play grounders. But Bessent couldn’t finish without help from the bullpen. Kluszewski opened the ninth with a single and Post hit his 23rd homer of the season. On Bessent’s next pitch, Bell doubled for his third hit of the game. Alston thanked the right-hander for a great day’s work and brought in Ed Roebuck, another rookie pitcher, to finish up. Roebuck allowed one inherited runner to score but secured the 8-5 victory and his 11th save of the season.

The doubleheader sweep by the Dodgers’ rookie pitchers making their major-league debuts remains a singular event in baseball history.5 As relieved as Alston may have been with those performances, Tebbetts was downright irate with his own team and its caliber of play, calling it “absolutely disgusting.”6 For the reminder of the road trip, which had one week to go, Tebbetts put a rigid curfew in place with nightly checks of all hotel rooms occupied by players.

Lou Smith’s reporting in the Cincinnati Enquirer was direct: “Too bad the second game wasn’t TV’d to Cincinnati. One had to see the Brooklyn fourth to believe it. It looked as if they had swiped a page from one of Olsen and Johnson’s comedies. We’ve never seen the Reds look worse.”7 His reporting of Tebbetts’ reactions was also detailed: “Tebbetts said that when he walked to the pitcher’s mound for a conference in that inning he was thinking seriously of replacing the entire infield with substitute players, then changed his mind.”8

No doubt that Tebbetts’ mood was influenced by the continuing futility of his team’s play at Ebbets Field. For the season they had dropped six straight games there. In fact, the Redlegs hadn’t won a season’s series at Ebbets Field since 1944, the last time they finished in the first division of the National League.9

As well as Bessent pitched in his major-league debut, his second start, four days later, was even more impressive. Bessent pitched a complete-game five-hitter against the Chicago Cubs at Ebbets Field for a 4-1 win. He may have tired in the ninth when Ernie Banks hit his 27th home run and Dee Fondy doubled, but this time there was no need for relief help. The irony of the circumstance is that these two games were his only starts for the remainder of the season as well as his major-league career with the Dodgers.

Nonetheless, Bessent’s contributions in relief this season were substantial, including three saves and an overall record in 24 appearances of 8-1, 2.70 ERA, edging Roger Craig’s 2.78 ERA for the lowest of any Dodgers pitcher. Roebuck had saved Bessent’s debut victory and finished the season with a team-leading 12 saves. However, Roebuck faded as the season wore on and it was Bessent and Clem Labine (11 saves) who led the Dodgers bullpen down the stretch.10 Bessent’s pitching for the balance of the season earned him third place in the National League Rookie of the Year voting behind winner Bill Virdon, St. Louis center fielder, and Phillies pitcher Jack Meyer.

The rookies also delivered in the 1955 World Series. For Roger Craig, it meant pitching six innings of four-hit ball to beat the Yankees 5-3 for a 3-2 World Series lead. For Bessent, it meant pitching three times in relief without allowing a run in 3⅓ innings. No situation was more critical than Game Four with the Dodgers down two games to one. In the fourth inning, Bessent replaced Carl Erskine with no outs and two runners on base and the Dodgers trailing 2-1. He yielded a run charged to Erskine, but limited the damage. With help from Clem Labine as well, the Dodgers bullpen did its job and they beat the Yankees 8-5. We know the rest of the story of the 1955 World Series.11

Roger Craig was a baseball lifer – pitcher, scout, coach, and manager. His career was long and marked by innovation. SABR biographer Richard Shook highlights the role he played in teaching pitchers how to throw the split-finger fastball.12 By contrast, Bessent’s major-league career was short, ending in 1958 with the now Los Angeles Dodgers and a pitching line of 14-7, 3.33 ERA and 12 saves. When his life ended under tragic circumstances in 1990, many remembered their former teammate whose quiet manner and blazing fastball earned their respect.13

If you missed the first game of the doubleheader, that story is told as Roger Craig pitches a three-hitter to beat Redlegs in his major-league debut.

The author accessed Baseball-Reference.com for box scores/play-by-play information (baseball-reference.com/boxes/BRO/BRO195507172.shtml) and other data, as well as Retrosheet.org (retrosheet.org/boxesetc/1955/B07172BRO1955.htm). The Don Bessent baseball card (#184) is from the 1956 Topps series and was obtained from the Trading Card Database.

7 Lou Smith’s Notes. Ole Olsen and Chic Johnson were American comedians of vaudeville, radio, Broadway stage, motion pictures, and television in a style of orchestrated mayhem from 1914 to the early 1950s. (The American Vaudeville Museum-University of Arizona, vaudeville.sites.arizona.edu/node/60).

9 Lou Smith’s Notes. “The top half of a league’s standings at any given time (the first four teams in an eight-team league) before 1969, when each of the two major leagues was broken into two divisions.” Paul Dickson, The Dickson Baseball Dictionary, 3rd Edition (New York: W.W. Norton & Company, 2009), 324. The Redlegs finished third in the National League in 1944.

10 Through June, Ed Roebuck (5-3, eight saves) pitched to a 2.17 ERA. From July through September, he pitched to an 8.39 ERA to finish the season with a 5-6 record (Paul Hirsch, “Ed Roebuck,” SABR Baseball Biography Project).