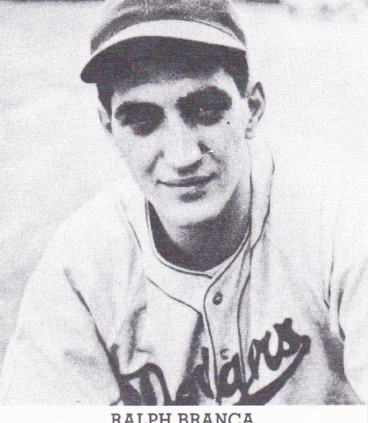 “I was a damn effective pitcher. It pains me to be remembered for one unfortunate pitch — and, unfairly, a pitch surreptitiously signaled to the hitter — as opposed to a hurler who, for a number of years, had good stuff.” — Ralph Branca1 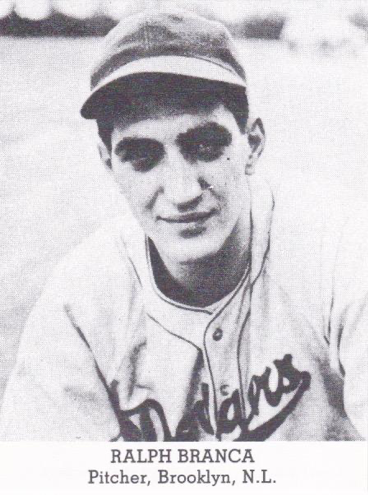 The young Brooklyn Dodgers fan raced home from school on October 3, 1951. He grabbed a snack from the kitchen table and settled in the basement in front of the small black-and-white Andrea television set. The unimaginable conclusion to a baseball game unfolded before his very eyes — “The Shot Heard ’Round the World.”2 Similar stories are told by many. Indeed, Ralph Branca will always be remembered for one pitch, even if strong evidence suggests that Bobby Thomson knew — through an elaborate sign-stealing scheme — exactly what pitch was coming when he hit the home run that gave the New York Giants the National League pennant.3

In his 2011 book, A Moment In Time, Branca talks of the dead silence in the Dodgers clubhouse after the game. “My teammates thought it best to leave me alone. … Only my dear friend Jackie, who knew me so well, came over and put his arm around my shoulder. “Ralph,” he said, “try not to take it personally. If it wasn’t for you, we would have never made it this far.”4

We must turn back the clock to 1947 to fully appreciate Ralph Branca. Ask any baseball fan the significance of the 1947 season and they are likely to tell you that Jackie Robinson integrated major-league baseball.5 Some may also know that it was a career year for Branca, a 21-year-old first-time All Star: 21 wins, 2.67 ERA, 36 starts, 280 innings pitched, 148 strikeouts — good for at least top three in the National League in those categories.

Branca’s cordial relationship with Robinson that spring became a lifelong friendship, spawned by a brief encounter on the diamond at Ebbets Field. On April 10 Robinson, still a Montreal Royal, made his Brooklyn debut in an exhibition game against the Dodgers and Branca. As Branca made his way back to the dugout at the end of an inning, their paths crossed and Robinson said, “Thanks, Ralph.” Robinson most certainly must have appreciated Branca’s earlier refusal to sign a players’ petition suggesting that Robinson’s presence on the Dodgers would be disruptive.6

It was quite a year in baseball. After all, Dodgers broadcaster Red Barber titled his book 1947: When All Hell Broke Loose in Baseball.7 A July game at Ebbets Field demonstrates what Branca and Robinson brought to the Dodgers, as they led Brooklyn to a World Series encounter with the New York Yankees.

On this day, Dodgers manager Burt Shotton started Branca (14-7, 2.93 ERA) for the 20th time in 1947; the right-hander was well on his way to leading the National League in starts (36). But the Cardinals had not been kind to Branca. A season earlier, they drove him from the mound in the third inning of the first game of the National League first-place playoff, on their way to sweeping the best-of-three series. They had beaten him three times already in 1947. Again, Branca was to be challenged, facing a Cardinals team still led by the core of talent that had won four of the last five National League pennants and claimed three World Series championships during that time.8

Cardinals manager Eddie Dyer started Red Munger (8-2, 3.23 ERA). In his most recent start against the Dodgers, in mid-June in St. Louis, Munger threw a shutout, 3-0, limiting them to three hits. Munger and Branca were teammates at the 1947 All-Star Game at Wrigley Field in Chicago, but neither pitched in the game.9

After Branca retired the Cardinals in order in the top of the first, the Dodgers got off to a quick start against Munger in their half of the inning, with skilled baserunning front and center. Eddie Stanky lined a triple to right-center. When Munger fielded Robinson’s hot grounder but failed to get Stanky off third, and Pete Reiser walked, the bases were loaded with no outs.

Branca was perfect through three innings and Stanky catalyzed another run in the bottom of the third for a 3-0 lead. He doubled to right-center and scored on Robinson’s single to left. Robinson scampered to second base on Enos Slaughter’s throw to the plate. There were no more runs that inning, but Roscoe McGowen of the New York Times described a hallmark of Robinson’s career on the basepaths. “Then he stole third and gave the fans a great treat when, trapped off the bag on Walker’s grounder to Marion, Jackie dashed back and forth, eluding a tag until Walker had reached third base.”10

Meanwhile, Branca remained perfect through four innings as he started to face the Cardinals batting order for a second time. Stanky was at it again in the bottom of the fourth. After Bruce Edwards singled and Branca walked, Stanky scored both of them with a double to left field for a 5-0 lead. Munger was done for the evening and Al Brazle replaced him on the mound, retiring Robinson on a lineout to right.

As Branca was pitching brilliantly, Robinson showed everyone he was more than just capable at first base. With the Dodgers’ Eddie Stanky at second base, it was clear that first base had represented the best opportunity for Robinson to play with the Dodgers in 1947. Robinson was determined to succeed even if he was never really comfortable at first base.11 He fielded Schoendienst’s near-hit in the first inning and hot grounders by Slaughter and Ron Northey in the fifth inning.12 Slaughter spiked Robinson, stepping on his calf, as he approached the base, but Robinson remained in the game.

The Dodgers added their final two runs in the seventh inning. With one out, Stanky reached base for a fourth time on shortstop Jeff Cross’s groundball error and scored when Robinson hit his sixth home run of the season, into the left-field stands. But the Dodgers’ offense had faded into the background. Branca’s pitching was the main story. He had retired all 21 Cardinals through seven innings, staying ahead of almost every batter.

When Slaughter lined a clean single into right field on Branca’s first pitch of the eighth inning, the bid for perfection, or even a no-hitter, was over. Branca said he was trying to be too careful with that pitch. “I didn’t get that high fast ball I threw Slaughter inside quite far enough.”13 It was the only hit Branca yielded in his 7-0 complete-game win.

The victory broke the Dodgers’ five-game losing streak to the Cardinals, who had swept a four-game series in St. Louis in mid-June. For Branca, his 15th win was sweet revenge for those earlier losses to the Cards. He also completed the season’s cycle, having secured one or more victories over each National League team.14

The story of this game and the bond between two teammates would be incomplete without returning to the fifth inning, years later. On April 15, 2012, the 65th anniversary of Robinson’s debut with the Dodgers, Branca visited the press box after throwing out the first pitch on Jackie Robinson Day at Fenway Park. He recounted the incident of Slaughter spiking Robinson to Peter Abraham, a Boston Globe sportswriter.15 In the dugout after retiring the Cardinals in the fifth, Branca offered to knock Slaughter down the next time he came up. Robinson insisted that he not retaliate, and Slaughter broke up the perfect game in his very next at-bat. As Branca said of Robinson, “He understood my pitching was more important.”16

Neither Roscoe McGowen (New York Times) nor Harold Burr (Brooklyn Daily Eagle) make mention of the fifth-inning incident at first base in their accounts of the game. The author’s research was unable to find any additional references to the incident beyond the account of Ralph Branca.18

A similar incident occurred on August 20, 1947, during the Cardinals’ next visit to Ebbets Field. In a game also started by Branca, Hugh Casey was pitching to Enos Slaughter in the 11th inning. Slaughter grounded out to first and spiked Robinson on his way past the base. Robinson was injured but stayed in the game. Roscoe McGowen notes the incident in his account of the game for the New York Times as does Retrosheet in its play-by-play/box score.19 A broad cross-section of references was reviewed, all mentioning the August 20 incident and its seriousness, none mentioning July 18.20

The author accessed Baseball-Reference.com for box scores/play-by-play information (baseball-reference.com/boxes/BRO/BRO194707180.shtml) and other data, as well as Retrosheet.org (retrosheet.org/boxesetc/1947/B07180BRO1947.htm). The illustrated baseball card is a 1991 reprint of the 1947 Tip-Top Bread card obtained from the Trading Card Database.

5 Louis Effrat, “Royals’ Star Signs with Brooks Today,” New York Times, April 11, 1947: 20. “According to the records, the last Negro to play in the majors was one Moses Fleetwood Walker, who caught for Toledo of the American Association when that circuit enjoyed major-league classification back in 1884.”

15 Peter Abraham, “Ralph Branca on Payback and Being Jackie Robinson’s Friend,” Boston.com, April 15, 2012, boston.com/sports/extra-bases/2012/04/15/when_in_doubt_g. In his 2011 book, A Moment In Time, Branca details the play at first base on pages 78-79, noting that he broke toward first for a possible throw as second baseman Eddie Stanky fielded the grounder and threw to Robinson at the bag. Both Baseball-Reference and Retrosheet report the play as an unassisted groundball out fielded by Robinson.