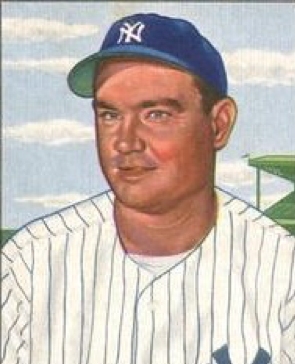 “The pitcher has to throw a strike sooner or later, so why not hit the pitch you want to hit and not the one he wants you to hit?” — Johnny Mize1

Great baseball players often write about their craft. Tony Gwynn called hitting a baseball an art in The Art of Hitting.2 Ted Williams characterized it otherwise in The Science of Hitting.3 Johnny Mize could hit a baseball and his 1953 book, How to Hit, left no doubt that he understood his craft and the importance of his bats.4

SABR biographer Jerry Grillo noted that a trunk full of bats of different sizes and weights always followed Mize wherever he played.5 Mize reported to Cardinals spring training in 1940 after a banner season in 1939 in which he led the National League in home runs (28) and batting average (.349). In addition to his new supply of bats, the used bats from the previous season meant he now had a supply of 43 bats, filling that trunk much to the chagrin of the Cardinals’ clubhouse staff.6 Ironically, the 1940 season saw Mize lead the major leagues in home runs (43) as well as runs batted in (137), leading him to quip, “To this day I often wonder what would have happened if I had started the season with 61 bats. But I imagine that would be too many bats to ask a club to buy for you.”7

You would have been forgiven if in reading the New York Times on Friday, December 12, 1941, you missed the lead story in the sports section. The front-page headlines blared “U.S. Now At War With Germany and Italy; Japanese Checked In All Land Fighting; 3 Of Their Ships Sunk, 2nd Battleship Hit.” John Drebinger told his readers on page 36 that manager Mel Ott and the New York Giants had acquired Johnny Mize from the St. Louis Cardinals.8 It was big news about a big man with a big bat! After all, Mize’s six seasons with the Cardinals during part of the Gas House Gang era9 were ones of substantial accomplishment for Mize, who batted .336 and averaged 26 home runs and 109 runs batted in per season.

He proved he could hit time and again, becoming the only player in baseball history to hit more than 50 home runs and strike out less than 50 times in a single season. As a New York Giant, he led the major leagues in 1947 with 51 home runs along with 138 RBIs, and struck out only 42 times.

The 36-year-old Mize was past the prime years of his Hall of Fame career when the New York Giants sold him in August 1949 to the Yankees for $40,000, but he could still hit. For the Yankees, filling a needed role with a spot purchase or trade was just one element of the strategy that helped general manager George Weiss build a baseball dynasty in New York. Acquiring the likes of Mize, Johnny Sain, Enos Slaughter, and Johnny Hopp to be highly productive for relatively short periods of time were part of that strategy.10 Arthur Daley likened it to an insurance policy, “Every year at this same approximate time they buy one and then cash it in with dividends in October.”11 And Mize was the first in 1949. In fact, Mize recounted later that one of the biggest thrills of his career came in World Series Game Three that very year, a pinch-hit, ninth-inning single off the Dodgers’ Ralph Branca to drive in two runs, leading to a 4-3 Yankees win.12

Two weeks before this three-game series against the St. Louis Browns, Mize was nearly an ex-Yankee on his way to Oakland of the Pacific Coast League. The Yankees wanted to trade Mize for a pitcher. There were deterrents to any such move.13 The Cardinals and the Tigers refused to let Mize clear waivers and as a 10-year veteran he did not have to accept assignment to the minor leagues. He didn’t accept and, fortunately, Weiss’s better judgment suggested that Mize not be released unconditionally.14

Since the 1947 season, in which the Yankees won their first postwar World Series, they dominated the Browns, compiling a 57-20 record as the series began. Former Yankee Don Johnson (3-0, 7.12 ERA) started for the Browns, having been traded barely one month earlier.15 The often wild Tommy Byrne (9-4, 4.92 ERA) started for the Yankees. In 1949 Byrne led the major leagues in walks (179) and hit batsman (13), and he was well on his way to doing so again in 1950. In fact, two weeks earlier, Byrne tied an American League record when he hit four Philadelphia Athletics batters in five innings pitched.16

The game started dramatically for both teams in the very first inning. Don Lenhardt hit Byrne’s first pitch to center for a triple. No damage. Byrne struck out Dick Kokos and Sherman Lollar before retiring Roy Sievers on a fly ball to left field. Now it was Johnson’s turn to get out of a jam. With one out, Phil Rizzuto executed a successful bunt single and Hank Bauer singled to right. When Mize singled to center, Rizzuto first held up and then stumbled and was finally thrown out at the plate.17 No score after one.

In the third inning, Johnson walked Rizzuto, who stole second base. Mize made certain that Rizzuto would not have to worry about his baserunning; he homered into the Yankees bullpen for a 2-0 lead. Mize next came to bat in the fifth inning after Bauer opened with a single. Again, Mize homered into the lower stands in right field for a 4-0 lead. Yogi Berra singled to left, advanced to third on Bobby Brown’s single to right and scored on Cliff Mapes’ fly ball. With two outs, Johnson hit the opposing pitcher, Byrne. Unnerved by it all, you might say that Johnson’s “wheels came off.”18 Gene Woodling hit an inside-the-park three-run homer for an 8-0 Yankees lead. As New York Times writer Louis Effrat described it, “The defense sagged comically on the relay to the plate.”19

It was time for another former Yankee, Dick Starr, to pitch for the Browns in the sixth inning.20 Bauer, Mize, and Berra greeted Starr with successive singles. With one out, Starr’s wild pitch scored a run and when Mapes walked, the bases were loaded again. Jerry Coleman’s single scored Mize but Berra was out at the plate in a rundown. Coleman and Mapes remained at second and third, respectively. Byrne singled to right, scoring both runners for the final Yankee runs.

The Browns scored their only run in the eighth inning when Byrne committed one of baseball’s cardinal sins, walking the opposing pitcher.21 The result was predictable. Starr scored when Lenhardt doubled, ruining Byrne’s shutout. Byrne won his 10th game of the season in the 12-1 Yankees victory, striking out eight and issuing only two walks, his fewest for any game he pitched in 1950.

The Yankees swept the Browns out of New York after winning a doubleheader the next day. For the three-game series, Mize was 9-for-10 with three home runs and six runs batted in, raising his batting average from .258 to .347. When Joe DiMaggio returned to the Yankees lineup for the next three-game series at Yankee Stadium against the first-place Detroit Tigers, manager Casey Stengel put DiMaggio in the fifth spot in the batting order and Mize at cleanup.22 For good measure in the first game, Mize delivered a 4-for-5 night, two home runs, five runs batted in, and a 14-5 win.

When Mize looked back on his career, his highlight moments were all as a New York Yankee.23 In addition to the 1949 World Series moment mentioned previously, there were two other highlights. On September 7, 1952, at Griffith Stadium, Mize hit a pinch-hit grand slam off the Senators’ Walt Masterson to complete a career cycle of having hit a home run in every major-league park. And the other one?

Mize well understood the need for the batter to be calm and focus attention on the task at hand against any pitcher, regardless of crowd noise, the intensity of the game, or other distractions. He came to bat in the fifth inning of 1952 World Series Game Five against Carl Erskine with the Yankees trailing 4-2. Mize hit a three-run home run and described his own feelings and thrill of accomplishment. “I must admit after circling the bases and was met by the team in front of the dugout, I had a goose-pimply feeling running up and down my spine, as any player would.”24

In 1944, Jack Kramer’s 17-win season led the St. Louis Browns into the historic All-St. Louis World Series against the Cardinals. They lost in six games, but not before Kramer pitched a complete-game victory in Game Three, the last time the Browns ever won a postseason game.25

SABR biographer C. Paul Rogers III wrote, “Kramer had Hollywood-good looks and by now had a reputation as a clotheshorse.”26 Well past the prime of his major-league career, Kramer signed with the New York Giants in 1950 and the Yankees in 1951, at which time he was a teammate of Johnny Mize for a brief period.

Both Kramer and Mize were customers of my grandfather’s custom tailoring business on Fifth Avenue in New York City across the street from the Flatiron Building. Each signed a scrap of paper that became my first two baseball-player autographs and the start of a collection. 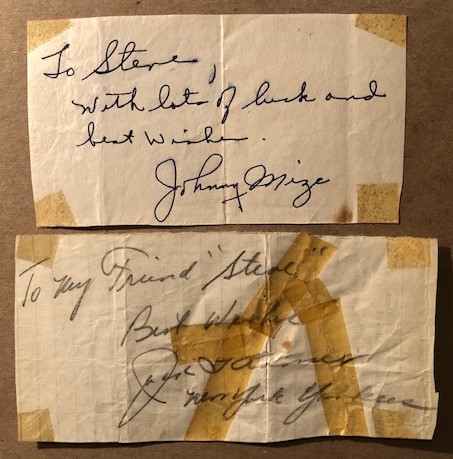 The author accessed Baseball-Reference.com for box scores/play-by-play information (baseball-reference.com/boxes/NYA/NYA195007180.shtml) and other data, as well as Retrosheet.org (retrosheet.org/boxesetc/1950/B07180NYA1950.htm).

9 Paul Dickson, The Dickson Baseball Dictionary, 3rd Edition (New York: W.W. Norton & Company, 2009), 359. “Nickname given to the 1934-1937 St. Louis Cardinals, but most strongly associated with the scrappy 1934 world champions. They were a rowdy, gritty, hard-playing, fun-loving crew on and off the field.” Mize joined the Cardinals in 1936.

10 George M. Weiss with Robert Shaplen, “The Best Decision I Ever Made,” Sports Illustrated, March 13, 1961: 32. The title refers to Weiss’s hiring of Casey Stengel to manage the Yankees.

14 Mize had accepted an earlier assignment to the Kansas City Blues, the Yankees’ American Association affiliate, subject to 24-hour recall. He was having problems with a sore right shoulder that hampered his throwing. With the Blues, Mize also got his hitting stroke back, batting .298 with five home runs and 18 RBIs in 26 games. Mize was back with the Bronx Bombers later in June. (Louis Effrat, “Mize and Lindell Leave the Bombers,” New York Times, May 16, 1950: 35.)

15 On June 15, 1950, Johnson was traded by the Yankees with Jim Delsing, Duane Pillette, Snuffy Stirnweiss, and $50,000 to the Browns for Tom Ferrick, Joe Ostrowski, and Leo Thomas.

18 Paul Dickson, 928. “Describing a situation in which a lead evaporated or the other team started to score many runs.”

20 After the 1948 season, the Yankees traded Starr, Lollar, Red Embree, and $100,000 to the cash-strapped Browns for Roy Partee and Fred Sanford.

21 Ryan Smith, “The Cardinal Sins of Baseball: The Things You Shouldn’t Do,” BleacherReport.com, November 17, 2008, bleacherreport.com/amp/82831-the-cardnial-sins-of-baseball-the-things-you-shouldnt-do.amp.html.