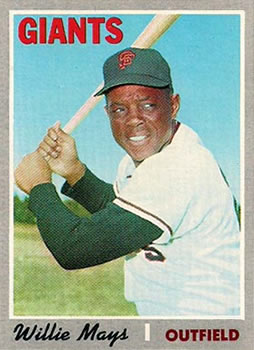 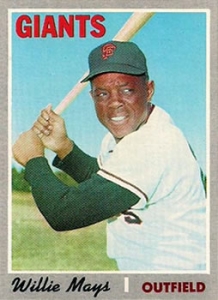 Willie Mays is arguably the greatest baseball player of all time.1 He was the quintessential five-tool player. He could hit for power (660 career home runs), hit for average (.301 career batting average), run quickly (338 stolen bases), play great defense (“The Catch” in the 1954 World Series), and had a tremendous arm. He was an All-Star for 19 consecutive seasons and won the National League MVP Award in 1954 and 1965. Mays was inducted into the Hall of Fame in 1979.

As July began, Mays produced one hit in three home games against the Los Angeles Dodgers, then eight more during a seven-game road trip to Atlanta and Houston. After appearing in his 21st career All-Star Game on July 14, Mays began the season’s second half with a homestand, needing only two hits to achieve the milestone.

The first game after the All-Star break was played on July 17 against the Montreal Expos. Mays was hitless in his first three at-bats but clobbered a three-run homer in his final at-bat of the game. He was sitting on 2,999 hits going into Saturday afternoon’s game with the Expos on July 18.

Gaylord Perry started for San Francisco, four days after allowing two runs in two innings in the All-Star Game. The 31-year-old surreptitious spitballer had already won 13 games, and he was on his way to his best season as a Giant, winning 23 games and placing second in the NL Cy Young Award voting.

Montreal countered with Mike Wegener, who was 1-2 going into the tilt, in the second season of his two-year major-league career. The 39-year-old Mays, playing his customary center field, was batting third for the San Franciscans. The 28,879 fans who attended the game at Candlestick Park hoped to witness history.

Perry retired the Expos in order in the first. In the bottom half of the inning, Mays got his first opportunity to reach the milestone, batting with runners on the corners and nobody out. He walked to load the bases for Willie McCovey, who earned an RBI with a fielder’s-choice grounder. A sacrifice fly by catcher Dick Dietz – like Mays, Perry, and McCovey, a 1970 NL All-Star – made the score 2-0.

Struggling with his control, Wegener walked the next two batters, bringing shortstop Hal Lanier to the plate with the bases loaded. Lanier’s double to left field drove in three runs to put San Francisco ahead, 5-0.

Repeating his first-inning performance, Perry set down the side without allowing a baserunner in the second. Wegener retired the first two batters he faced in the bottom half of the inning, which brought Mays to the plate again, still one hit away from the milestone.

The slugger fell behind in the count, but then pulled a groundball between third and short, bounding across Candlestick Park’s artificial turf. It got through untouched for the 3,000th hit of his storied career.

Discussing the at-bat later, Mays said, “I hit a slider. The count was 0-and-2 and I was looking for anything close. None of the pitches Wegener threw me the first time I was up were close.”3

After stepping on the bag at first, Mays walked slowly toward the Giants dugout on the first-base side as teammates and dignitaries came out to congratulate him. Among the luminaries were National League President Charles Feeney; a fellow member of the 3,000-Hit Club, Stan Musial; Hall of Famer Carl Hubbell; and Monte Irvin, who helped Mays get his start in baseball.

The ball Mays hit had been thrown in, and Feeney handed it to Mays.4 Mays acknowledged the ovation from the crowd with a tip of his cap.5 After the celebration, McCovey came to bat. His double to left-center field drove home Mays from first, making the Giants lead 6-0.

Perry again retired the side in order in the third inning. In the bottom half of the inning, Perry came to bat with Lanier on first base. For just the second time in his nine-year career, and the only time that season, Perry slammed a home run. That put San Francisco ahead 8-0.6

The Expos did not manage a baserunner against Perry until Mack Jones walked with one out in the fourth. Marv Staehle’s double with one out in the sixth was the first hit Perry allowed. The two-bagger scored Jim Fairey with what turned out to be Montreal’s only run of the game.

San Francisco responded with two runs in its half of the sixth, with Perry and Mays playing significant roles. Perry led off with his second extra-base hit of the game, a double, and scored when Bobby Bonds followed with a double. One out later, Mays singled for his 3,001st hit, sending in Bonds for a 10-1 lead.

At the postgame interview Mays said, “Right now, I don’t feel excitement about this. A reaction may set in later, and in a few days, maybe I will. But the main thing I wanted to do was to help Gaylord Perry win a game. I don’t like to talk about goals, but maybe I have a goal – to help the guys win. I wasn’t going to worry about this thing at all. I thought about it sure, there were two photographers at my house this morning. I couldn’t help but be reminded.”8

The team presented Mays with a large cake after the game, and team owner Horace Stoneham promised $3,000 per year for four years toward the college education of Mays’s 11-year-old son, Michael.9

Mays became the 10th major leaguer with 3,000 hits, reaching the milestone two months after Henry Aaron, who started with the Milwaukee Braves three years after Mays broke in with the Giants in 1951. Before Aaron and Mays, it had been 12 years since the last man to break the barrier, Stan Musial, had done so, in 1958. Mays joined Aaron as only the second major leaguer with 3,000 hits and 500 home runs.10

Mays played for three more seasons after his 3,000th safety, finishing his career with 3,283 hits.

Many thanks to John Fredland for carefully reading the first draft of this article. His suggestions significantly improved the final product. The article was fact-checked by Kevin Larkin and copy-edited by Len Levin.

Mays had 10 hits for the Birmingham Black Barons of the Negro American League in 1948. In 2020 Major League Baseball included the 1948 Negro American League season among its list of Negro League seasons recognized as “major league.” If those hits are added to Mays’ total, he reached 3,000 hits 15 days before this game, with a single off fellow Hall of Famer Don Sutton in the Giants’ July 3 home game against the Dodgers.

In addition to the sources cited in the Notes, I used Baseball-Reference.com and Retrosheet.org for team, season, and player pages and logs and the box scores and play-by-plays for this game.

1 There is not a definitive answer to who was the best player in baseball history. But there is no question that Willie Mays is in the discussion. Maury Allen (Baseball’s 100, 1981) and Joe Posnanski (The Baseball 100, 2021) have him ranked first in their books of the top 100 players. Bill James (The New Bill James Historical Abstract, 2001) has him third. Baseball Egg has a comparison of nine different lists of the top 100 players. Mays is first on The Athletic.com list, second at Baseball Egg, ESPN, Bleacher Report, and The Sporting News, and is third at The Baseball Scholar and Beyond the Boxscore. Baseball Egg, “Comparing Top 100 All-Time Baseball Player Lists, https://baseballegg.com/comparing-baseball-all-time-top-100 (last accessed May 10, 2022).

2 Spahn and Mays were briefly teammates on the San Francisco Giants in 1965, the final season of Spahn’s Hall of Fame career.

4 The ball is now in Cooperstown at the Baseball Hall of Fame.

6 There’s an interesting story associated with Perry’s first home run. In 1964 Perry was in his third year with the Giants when a reporter made a favorable comment about Perry’s hitting to Alvin Dark (Perry’s manager). Dark commented, “Mark my words, a man will land on the moon before Perry hits a home run.” Perry was pitching for Giants on July 20, 1969, when Apollo 11 landed on the moon. The landing was announced over the public-address system during the game. Perry hit the first home run of his career about 30 minutes later. The web site is Chris Landers, Cut4, MLB.com, “The Story of Gaylord Perry, the Moon Landing and a Most Unlikely Home Run,” https://www.mlb.com/cut4/gaylord-perry-hits-home-run-just-minutes-after-neil-armstrong-moon-landing-c2433 (last accessed May 23, 2022).