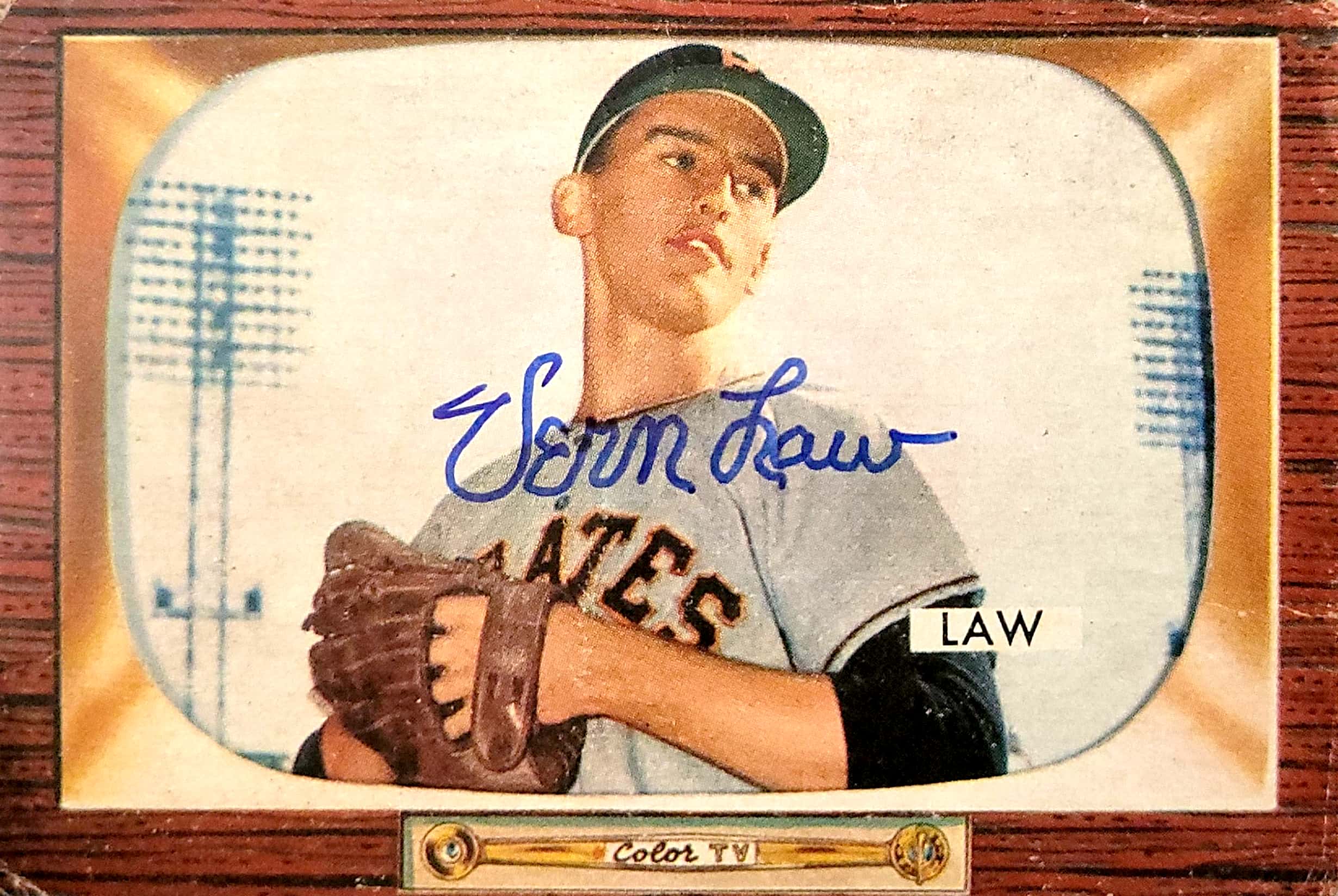 Had Fred Haney not cared about maintaining his job as manager of the Pittsburgh Pirates, the story of one of the more improbable starts in major-league history might have turned out differently.

“[Haney] said, ‘That’s it, no more – if you hurt your arm, they’ll run me out of town, so go take your shower,’” recalled Pirates pitcher Vern Law of the conversation with his manager after he had completed the first 18 innings against the Milwaukee Braves at Forbes Field on July 19, 1955. “… So I left and went into the clubhouse and listened to the end of the game.”1

Law made an emergency start on short rest and had persuaded his manager to leave him in the game each time he was due to come to the plate during extra innings. Haney put his foot down in the bottom of the 18th, though, and lifted Law for pinch-hitter Roman Mejias with the score tied, 2-2, acknowledging it was a “crime” that Law wouldn’t get credit for the victory.2

Bob Friend, who split his time as a starter and a reliever in 1955,3 got the first out in the top of the 19th, but walked Eddie Mathews and allowed a single to Henry Aaron. Friend retired Bobby Thomson but rookie Chuck Tanner, who grew up 50 miles from Pittsburgh in New Castle, Pennsylvania, poked a single to move the Braves ahead, 3-2.

“I felt we deserved to win that game and had faith in my teammates that we could come back,” Law said, “but it was a disappointment to me when they scored to go ahead, 3-2.”

Gene Conley – Milwaukee’s only 10-win pitcher at the time – took the mound for the bottom of the inning at 12:50 a.m. knowing play that night would soon end one way or the other because National League rules prevented a new inning from beginning after 12:50 a.m. He had set the Pirates down in order in the 18th, but rookie Gene Freese reached on a surprise bunt single to open the 19th and moved to second on fellow rookie Roberto Clemente’s sacrifice.

Dale Long’s double dropped inside the left-field foul line to tie the game at 3-3. Toby Atwell was intentionally walked to set up a potential night-ending double play on a groundball, but Frank Thomas instead banged a single into center. Bill Bruton’s throw was strong enough to get Long to stop short of home, but when the ball skipped past catcher Del Crandall, Long scored the winning run,4 ending the marathon game at 12:59 a.m. after 4 hours 44 minutes of play.5

Law wasn’t even supposed to be the starting pitcher for the game. “I was supposed to start the next game [on July 20], as we pitched every fourth day, not fifth day like they do today [2021],” Law said. “I was in the outfield running my laps to keep the legs strong – one of the coaches came out and asked me if I could pitch tonight as our starter came in sick. [He said], ‘We need a pitcher, and if you think you could give us some innings, we’d appreciate it.’ Even though I would now be pitching on [short rest], I agreed to do what I could.”

Law, a 25-year-old hurler in his fourth season, took the place of Ron Kline, and to suggest he simply did what he could would be quite an understatement.

Facing a Braves lineup that included multiple future Hall of Famers, Law was sharp from the beginning. He allowed a first-inning solo home run to Mathews and an unearned run in the fourth, but the Braves’ offense could string together little else.

Pittsburgh’s hitters, facing Lew Burdette, scored twice in the bottom of the third when Jerry Lynch slashed a two-run single to drive in Dick Groat and Freese. Pittsburgh threatened in the fourth with runners on second and third with two outs and had the bases loaded with no outs in the bottom of the ninth, but the Pirates couldn’t push a run across in either frame.

Milwaukee forced extra innings after catching Freese in a rundown between third base and home plate to complete a double play in the ninth. After a walk loaded the bases again, Braves reliever Chet Nichols induced a Long grounder to squash the threat.

That successful rundown wasn’t the first standout defensive play of the night for the Braves – in the second inning, they turned the franchise’s first triple play since 1949, but that essentially became an afterthought by game’s end.6 After Atwell walked and Thomas reached on an error, Johnny O’Brien hit a sharp liner to Mathews at third, who fired the ball to second baseman Aaron,7 who relayed it to first baseman Joe Adcock to nab both retreating runners and end the inning.8

Considering the potency of Milwaukee’s offense9 – as well as some decent prowess in Pittsburgh’s lineup10 – for the game to carry on for an extra 10 innings was a surprise to players and the 7,953 fans in attendance.

Law was the third man due up to the plate in the bottom of the 13th inning. From the mound, he had allowed just two runners to reach second base since the fourth inning and retired six straight, so he had little interest in being lifted for a pinch-hitter.

Law’s persistence paid off, as he retired six of the next seven batters – including his 11th and career-high 12th strikeout victims.

But in the bottom of the 15th, Haney likely had more of a dilemma. The Pirates were rallying after Thomas had drawn a two-out walk. He moved to third when O’Brien singled, and Braves pitcher Ernie Johnson intentionally walked Tom Saffell with Law standing on deck. No one would have blamed Haney for lifting Law for a pinch-hitter,11 but once again, Law’s pleading won out.

Law was unable to come up with a clutch hit but retired eight of the next nine batters to finish out the longest start of his career.12 All told, he pitched 14 straight shutout innings, allowed just four hits after the ninth, and walked only two batters over his 18 frames.

“Well, I let him pitch the 18th but told him that would be all,” Haney said. “He has a fine future in this game, and I didn’t want to ruin his arm.”13

Law became the first pitcher to throw at least 18 innings in a game since Detroit’s Les Mueller fired the first 19⅔ innings against the Philadelphia Athletics in a 24-inning, 1-1 tie on July 21, 1945.14 No pitcher as of the 2021 season had repeated Law’s effort.15

“That did not surprise me at all because Vern was always in great shape,” Thomas said in 2021. “He’s 90 years old and still pitches batting practice for the school where he lives.”16

The Braves, who were holding dwindling playoff hopes as the eventual World Series champion Brooklyn Dodgers had already amassed a 12½-game lead, suffered a second straight walk-off loss to the Pirates after Jack Shepard’s single in the bottom of the ninth secured another 4-3 win the next night.17 That marked the third straight one-run loss for the Braves, who finished the season 13½ games behind Brooklyn.

But considering that Milwaukee was managed by Charlie Grimm, the Braves weren’t able to give up hope until they were mathematically eliminated.

“I managed the Cubs in 1935 when they won 21 straight games to close out the season,” Grimm said of the September streak that shifted Chicago 8½ games in the NL standings.18 The 1955 Braves wouldn’t be so lucky, never winning more than six games in a row down the stretch and never getting back within 10 games of the league lead.

The Pirates weren’t able to climb out of the National League’s basement but were a much-improved team late in the season. The 19-inning victory started the club on a 29-33 finish (.468), a marked improvement from the first 92 games of the season when Pittsburgh went 31-61 (.337).

For Law, the long outing didn’t change his weekly routine and it was the first of eight starts in his career that lasted more than nine innings. He didn’t have to wait long for the next one – it occurred five days later when he completed all 10 innings of a 3-2 victory over the Chicago Cubs in the second game of a doubleheader.

“I probably got more write-ups for not winning that game than if I’d won it,” Law said. “I think also I was given more respect for the efforts I’d make every time out.”

Vern Law and Frank Thomas both provided written responses to questions I sent about this game when I mailed an autograph request to each. Among the multiple items I received back is the autographed Vern Law card pictured with this article. I appreciate both men taking the time to respond to my inquiries.

1 Written correspondence received from Vern Law on July 9, 2021. All direct quotations attributed to Law come from this correspondence.

3 Though Friend was primarily known as a starter during his career, he started in only 20 of his 44 appearances in 1955 – the only year in his major-league career that he had more relief appearances than starts.

4 This was the second straight game the Braves lost when the winning run was unearned. In Milwaukee’s last loss prior to that, on July 16, the winning run scored on a wild pitch.

8 The play served as revenge for the Braves. On May 5, 1955, the Pirates turned a triple play in a 9-4 victory over Milwaukee.

9 The Braves finished second in the major leagues with 182 home runs in 1955. Brooklyn led the majors with 201.

10 Offensively, the Pirates featured recognizable names such as Roberto Clemente, Dick Groat, Frank Thomas, and Dale Long, but entered the game with a league-worst record of 31-61.

11 For a pitcher, Law was a fairly strong hitter. He entered the game batting .310 and for his career hit .216. For comparison, his counterpart, Burdette, entered the game with a .286 average and was a career .183 hitter, and Friend came into the game hitting .188 and finished his career with a .121 average.

12 Despite firing 18 innings, Law did not set the franchise record for innings pitched in a game. That honor belongs to Babe Adams, who completed 21 innings on July 17, 1914, in a 3-1 loss to the New York Giants.

14 The Tigers and Athletics tied an American League record that night by playing 24 innings.

15 Law recounted to the Pittsburgh Post-Gazette the following day that his father, Jesse, also pitched 18 innings in a day as a semipro player. The elder Law won twice after completing both games of a doubleheader in Paris, Idaho. Myron Cope, “Law’s 18 Good, but Dad Did It,” Pittsburgh Post-Gazette, July 21, 1955: 16.

17 The Pirates hadn’t recorded back-to-back walk-off victories since June 14 and 15, 1949 – which also came against the Braves, who played in Boston at that time.