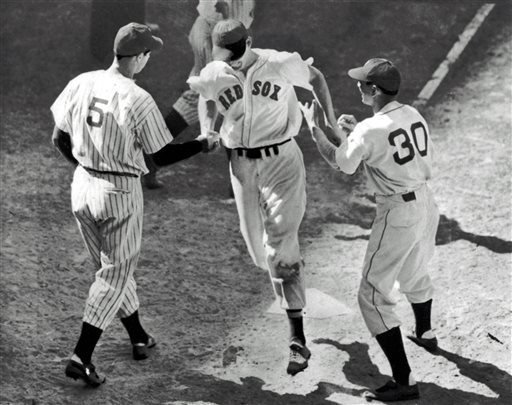 Ted Williams bounded down the first-base line at Briggs Stadium like the kid he was. He clapped his hands twice as he neared the bag then bounded over it with a joyful skip as he made his way around the bases.

Williams’s three-run homer with two outs in the bottom of the ninth had just won the All-Star Game for the American League, and the 22-year-old couldn’t imagine that life could get much better.

“I’ve never been so happy and I’ve never seen so many happy guys,” Williams would write decades later in his autobiography. “… I had hit what remains to this day the most thrilling hit of my life.”1

Not to mention one of the most memorable hits in All-Star history.

The first midsummer classic held in Detroit will always have a special place in the game’s lore because of the way it ended. Ted Williams, in the midst of a season that would see him hit .406, stepping on home plate and sharing a handshake with Joe DiMaggio, who was deep into what would become a 56-game hitting streak.

The rival outfielders had generated all the buzz heading into the game, though it was DiMaggio who commanded most of the headlines. The nine days before the All-Star Game had seen DiMaggio blow past George Sisler’s American League record of 41 consecutive games with a hit and Wee Willie Keeler’s all-time mark of 45 straight.

He came to Detroit sitting on 48 games and played it cool for inquiring newsmen:“Now the pressure is off. I have my fame.The rest is up to the pitcher who stops me. I’m not worried any more. Sisler’s record lasted almost 20 years. By the law of averages mine should too.”2

DiMaggio, 26, was an All-Star for the sixth time in as many years in the majors and the ever-studious Williams arrived in Detroit prepared to soak in all the knowledge he could from the Yankee great.

Williams bought an 8mm movie camera specifically to bring to the game and used it to film his peers during batting practice, with a focus on the pinstriped No. 5. “I want to study his style,” Williams told reporters. “DiMaggio is the greatest hitter I ever saw and probably will see during my career.”3

As game day approached, National League manager Bill McKechnie of the Reds put his faith in a seasoned pitching staff to hold down an impressive AL lineup. Countering an American League nine that featured six future Hall of Famers (including starting pitcher Bob Feller), McKechnie’s seven-man pitching staff had a combined 21 games of All-Star experience under its belt heading into Detroit. Only Claude Passeau of the Cubs from that group was making his first All-Star appearance.

Rain had swept through the area the previous day, but Tuesday, July 8, brought “perfect” weather4 and had fans streaming toward Michigan and Trumbull for the 1:30 P.M. start. The 1940 American League pennant won by the Tigers waved in the breeze and the ballpark was decked out in patriotic bunting for the occasion.

World War II was nearly two years old at that point, and even though the U.S. remained neutral the signs of what was to come were clear. The hometown team’s biggest star, Hank Greenberg, was absent, having been inducted into the Army in May.5 And proceeds from the game were earmarked for the USO, the first time in the nine-year history of the event that revenues would not be turned over to a fund for retired ballplayers.6

As the crowd of 54,674 settled in, Feller took the mound and opened the game by striking out Cubs third baseman Stan Hack. Feller and NL counterpart Whitlow Wyatt of the Dodgers did their part, allowing two baserunners between them in five scoreless innings. It wasn’t until they departed that the hitters began to get limbered up. Naturally, Williams played a starring role.

Cecil Travis collected the first AL hit with a one-out double off Paul Derringer in the fourth and DiMaggio moved him to third with a fly ball to the vast reaches of center field. Williams followed with a double to right to put the American Leaguers up 1-0. The NL tied it on a Terry Moore sacrifice fly in the sixth before Lou Boudreau singled in DiMaggio in the bottom of that inning to put the AL back on top.

If the game had ended differently, it would no doubt have been remembered for Arky Vaughan’s performance that afternoon. The Pirates shortstop’s star turn began in the top of the seventh, when he followed Enos Slaughter’s single off Washington’s Sid Hudson with a home run into the inviting right-field deck to give the NL a 3-2 lead. Hudson worked himself into and out of a jam after that, escaping the inning with runners on first and third, but all that did was bring Vaughan back to the plate in the eighth. Facing Eddie Smith of the White Sox this time, Vaughan once again visited the upper deck in right to bring home Johnny Mize with a two-run shot that made it 5-2. That round-tripper made Vaughan the first player to hit two home runs in an All-Star Game.7 He should have been a hero, wrote Gayle Talbot of the Associated Press, but he wound up “just another unfortunate who almost hit the jackpot.”8

Claude Passeau, the 32-year-old first-time All-Star, was Bill McKechnie’s choice to finish the game. Staked to a three-run lead as he came out to start the bottom of the eighth, he got in trouble quickly by allowing a one-out double to DiMaggio. After Passeau got a called third strike on Williams — a decision the slugger would discuss at length9 with home-plate umpire Babe Pinelli — Ted’s Boston teammate Dom DiMaggio rapped a single to center to score his older brother. Boudreau followed with a single and a Pete Reiser error allowed both runners to move up, but Passeau struck out Jimmie Foxx to escape.10

Passeau recorded a quick out to open the bottom of the ninth before everything began to unravel for the Mississippian. Ken Keltner collected a pinch-hit infield single and Joe Gordon followed with another single before Cecil Travis walked to load the bases for none other than Joe DiMaggio. After falling into a 0-and-2 hole, DiMaggio topped what appeared to be an easy double-play ball to shortstop Eddie Miller of the Braves. Miller fed to Billy Herman at second to force Travis, but Herman’s relay throw pulled Frank McCormick off the bag at first, allowing Keltner to score and keeping the AL alive.

With the game in the balance, McKechnie visited the mound to confer with Passeau, catcher Harry Danning, and the infielders. Rather than choosing to put Williams on base and let Passeau, a right-hander, take his chances with the righty-swinging Dom DiMaggio, the Nationals decided to pitch to Ted. Williams killed time during the conference by sparring with Pinelli over the called third strike his previous time up, but the umpire stuck to his guns, insisting the pitch was a strike at the knees.11 Williams then took a deep breath and gave himself a “fight talk.”

“I said: ‘Listen, you lug. He outguessed you last time and you got caught with your bat on your shoulder for a called third strike. You were swinging late when you fouled one off, too. Let’s swing and swing a little earlier this time and see if we can connect.’”12

Williams worked the count to 2-and-1 and Passeau finally threw him “a fast one, chest high.”13 By the time Williams’s bat had completed its trademark arc, the ball was screaming toward the facing of the upper deck in right field as the Detroit crowd roared its approval. Williams was mobbed by his AL teammates as he crossed the plate, with Feller emerging from the clubhouse in street clothes to join the celebration. Once the party moved inside, AL manager Del Baker of the Tigers gave Williams a kiss on the cheek.

There had been talk, then as now, about how much the midsummer exhibition actually meant to the players, but Williams’s blow brushed such concerns aside. The next day’s Detroit Evening Times described a National League dressing room “plunged into gloom” before columnist Bob Murphy summed up the state of affairs:

“No college football team ever showed more enthusiasm than the American Leaguers when Williams came trotting through the lengthening shadows toward home plate.”14

5 Greenberg reportedly was in Detroit on leave for the All-Star Game but kept a low profile. Columnist Bob Murphy of the Detroit Evening Times wrote in July 8 editions with teasing vagueness about an encounter with the slugger at the Leland Hotel the night before the game, and the July 9 Detroit Free Press reported that Greenberg watched the game from “an obscure upper-deck seat where no photographers or reporters were around to make his presence known.”

7 Vaughan hit only two home runs the rest of the 1941 campaign, giving him six homers for the season in games that counted.

9 The box score shows Bill Summers of the American League as the home-plate umpire, with Pinelli at third, but J.G. Taylor Spink’s Sporting News column, July 17, 1941, notes that “the umpires switched midway through the game and the National leaguer, Babe Pinelli, was calling the balls and strikes” at the end.

10 Foxx was the only player selected for the first nine All-Star Games.