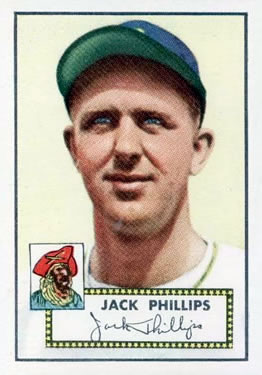 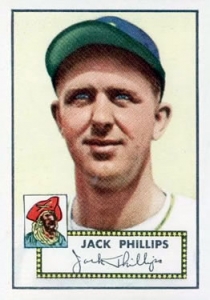 Still led by four pillars of their 1940s dynasty, the St. Louis Cardinals surged into first place in the National League in July 1950. But three losses in three days in Pittsburgh, punctuated by Jack Phillips’ game-winning ninth-inning pinch-hit grand slam on July 8, foreshadowed their subsequent fall from contention and final fadeout of the glory years.

For much of the 1940s, the Cardinals reigned over baseball.1 They reached three consecutive wartime World Series from 1942 to 1944, winning twice. Returning in 1946, they beat the Boston Red Sox for their third title in five years.

Branch Rickey’s farm system supplied their star power. Right fielder Enos Slaughter joined the lineup in 1938, shortstop Marty Marion in 1940, and left fielder Stan Musial in 1941. In 1945 they added second baseman Red Schoendienst, signed before Rickey left for Brooklyn in 1942. All four started every game of the 1946 World Series.

Farm production diminished in Rickey’s absence and the Cardinals slipped to second place for three straight years after 1946. Their nearest miss was in 1949: St. Louis led Rickey’s Dodgers by 1½ games entering the season’s last week, but a two-game sweep by Pittsburgh left them in second to stay.2

In 1950 the Cardinals chased after glory once again. When they visited Pittsburgh’s Forbes Field on the weekend before the All-Star break, a seven-game winning streak had swept them into first place by a game over Philadelphia. They had persevered through injuries to Marion, Musial, and several others,3 most significantly relief ace Ted Wilks, sidelined since the spring with bone chips in his elbow.4 Favorable trendlines figured to continue against the Pirates, whose season had unraveled with 31 losses in their last 38 games.

But 20-year-old rookie Vern Law stopped the Cardinals in the series opener on July 7, earning his first major-league victory in Pittsburgh’s 9-1 win.5 St. Louis manager Eddie Dyer, at the helm since the 1946 championship season, hoped to rebound on Saturday afternoon with right-hander Red Munger. In 1949 Munger started the opener of the Cardinals’ fateful September visit to Pittsburgh, but Tom Saffell’s grand slam knocked him out in the second inning in a 6-4 loss.6 Venerable regulars Schoendienst, Musial, Slaughter, and Marion also appeared on Dyer’s lineup card, just as they had for so many of St. Louis’s triumphs over the years.

Their longtime stars sparked the Cardinals to an early lead against left-hander Cliff Chambers. Schoendienst singled with one out in the first. One out later, Eddie Kazak drove him in with a triple to deep right-center. Slaughter’s infield single scored Kazak for a 2-0 advantage.

Schoendienst set the table again in the third. After leading off with a double, he held at third on Musial’s single to center, drawing a throw home and enabling Musial to take second. Pittsburgh third baseman Pete Castiglione fielded Kazak’s grounder and trapped Schoendienst in a rundown for the first out, but Kazak reached second to reset the Cardinals with two runners in scoring position. Musial and Kazak scored on Slaughter’s single through a drawn-in infield, pushing the score to 4-0.

Munger kept Pittsburgh scoreless for three innings, but the Pirates broke through in the fourth on Ralph Kiner’s National League-leading 24th home run, hit high over the clock on the left-field scoreboard. An inning later, two runs on four singles cut the deficit to 4-3, and Dyer replaced Munger with left-hander Harry “The Cat” Brecheen. Brecheen declawed the Pirates’ midgame offensive, recording the final out of the fifth and blanking Pittsburgh on two hits over the next three innings.

By Brecheen’s entrance, veteran right-hander Murry Dickson was on the mound for Pittsburgh. Another product of Rickey’s farm system, Dickson was a Cardinal from 1938 to 1948, winning 15 games and starting twice in the World Series in 1946, but the Pirates purchased his contract for $125,000 before the 1949 season.7 The swap tormented St. Louis: Dickson beat the Cardinals five times that year, including the complete-game win that capped Pittsburgh’s race-changing September sweep.8

Dickson contained his former teammates in the fourth and fifth, but the Cardinals surged for two sixth-inning runs. With one out, Del Rice and Brecheen singled. Dickson retired Bill Howerton, but Schoendienst, who had picked up his third hit of the game in the fifth, singled off second baseman Danny Murtaugh’s glove for hit number four, driving in Rice. Musial followed with a single off shortstop Stan Rojek’s chest; Brecheen scored for a 6-3 Cardinals’ lead.

Those runs were Dickson’s only blemishes in long relief; he held St. Louis scoreless for the next three innings. Schoendienst made it a five-hit day with a two-out triple in the eighth, but Musial grounded out to strand him at third. The Cardinals carried their three-run advantage into the ninth.

In 1948 and 1949, Dyer summoned Wilks 17 times in the eighth or ninth inning with St. Louis winning by three runs or fewer. With Wilks injured in 1950, Dyer occasionally used Al Brazle in these situations, but he had pitched a complete game two days earlier. Brecheen was instead tasked with closing out the Pirates.

Wally Westlake opened the bottom of the ninth with a walk. One out later, Castiglione blooped a single to left. Hank Schenz pinch-hit for catcher Ray Mueller and singled to load the bases. With Dickson due to bat, Pittsburgh manager Billy Meyer went to his bench again. He sent right-handed-batting Jack Phillips to face the lefty Brecheen.

As a rookie with the Yankees, Phillips appeared in two games during the 1947 World Series, but New York sold him to the Pirates in 1949. Now 28 years old, Phillips took Brecheen’s first pitch, a fastball, for a strike. The second offering was a curve, low and away. Phillips pulled it in the air to left.

In 1947 the Pirates had partitioned Forbes Field’s vast left field with a wire fence, running from the foul line to a light tower in left-center. The fence shortened the home-run distance in left field by 30 feet. When right-handed slugger Hank Greenberg joined Pittsburgh that year, the hitter-friendly modification became known as Greenberg Gardens.9 Phillips’ drive arched toward the wire fence.

Out in left field, Musial raced back, leaped, and reached up, hoping to intercept the ball before it struck — or cleared — the eight-foot-high structure. The native of nearby Donora, Pennsylvania, banged off the fence and fell to the ground, crumped in a heap. The ball hit an iron pole supporting the fence, bounced up, and dropped into the Pirates bullpen on the far side of the fence. Lenny Levy, Pittsburgh’s bullpen catcher, grabbed the ball and held it up in his glove. Umpire Al Barlick, hustling toward left field, saw the ball clear the fence. He swung his right arm, signaling a home run.

But Phillips and Pittsburgh’s three baserunners did not see Barlick’s ruling. Westlake, Castiglione, and Schenz held their stations for an anxious moment, uncertain of the outcome of Musial’s leap. Was it a home run? A catch? Was the ball lying on the field beneath Musial?

Barlick ran toward the infield. The other two umpires, Augie Donatelli10 and Lee Ballanfant, went out to meet him. Barlick again signaled home run; this time, everyone saw it. Phillips’ hit would have been a routine putout before Greenberg Gardens, but it was now a game-winning grand slam. The Pirates celebrated their improbable win, greeting Phillips with, as the Pittsburgh Press reported, “a delegation that resembled a committee awaiting a man who had just won a pennant with his homer.”11

Postgame discussion centered on the forensics of ball, Greenberg Gardens, and Stan Musial.

“[The ball] might have hit me on the head,” Musial said. “I have a bump there as well as one on the hip and knee, the result of bouncing into the fence. I didn’t realize the ball was going that far.”12

“Musial made a great attempt to catch the ball which, if he had not touched it, would have gone into the homer zone anyhow,” Barlick reported. “His glove was a little above the screen when he hit the ball over the screen.”13

The Pirates rallied a day later to complete the sweep, sparked by another Phillips home run. St. Louis jockeyed for first place with Brooklyn and Philadelphia for two weeks before collapsing with 14 losses in 20 games between late July and mid-August. During the Cardinals’ slide, a St. Louis newspaper lamented the “three-game series [against Pittsburgh] that began the St. Louis downfall just before the All-Star interlude last month.”14 By September 1 they were in fifth place.

The Cardinals finished 1950 with their worst record in 12 years and replaced Dyer with Marion, who lasted one season before Eddie Stanky replaced him. Slaughter was traded in 1954 and Schoendienst in 1956. St. Louis did not hold first place as late as July until 1957; they did not return to the World Series until 1964, a year after Musial’s retirement.

In addition to the sources cited in the Notes, I consulted the Baseball-Reference.com and Retrosheet.org websites; game coverage in the Pittsburgh Press, Pittsburgh Sun-Telegraph, St. Louis Globe-Democrat, and St. Louis Post-Dispatch; SABR Baseball Biography Project biographies of several players who participated in the game, especially Charles F. Faber’s biography of Jack Phillips; and a telephone interview with Vern Law, whose 16-season career as a Pirates pitcher began in 1950.

13 Charles J. Doyle, “Bucs Win, 7-6, on Phillips’ Grand Slam,” Pittsburgh Sun-Telegraph, July 9, 1950: 1, 3. Two days after the game, Chester L. Smith’s Pittsburgh Press column observed that Phillips’ home run “has almost taken the play away from the All-Star game. … Eye-witnesses arriving from Pittsburgh are being buzzed from every direction by the baseball mob to fill them in on the details.” Speculation about Musial’s role fueled the interest: “That Stan Musial actually turned what ordinarily would have been a two-base hit into a homer by leaping against the bullpen screen and getting enough of his glove on the ball to cause it to skitter into the bullpen was what they wanted to hear about.” “If Musial weren’t such a give-it-all guy who would try to make a catch like that it never would have happened,” New York Giants scout Tom Sheehan said. Chester L. Smith, “The Village Smithy,” Pittsburgh Press, July 10, 1950: 18.