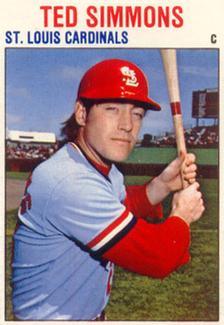 The 1979 St. Louis Cardinals were flying high when they arrived in Los Angeles for the start of a three-game series with the Dodgers on June 11. They had won nine of their previous 11 games — all at home, including a three-game sweep of the Dodgers — ascending into first place in the National League East Division with a 31-21 record.1

Moreover, the Cardinals sat atop the division after 52 games for the first time since 1971. And the last time they were 31-21 was in 1968, the last time St. Louis reached postseason play.2

Leading the Cardinals’ surge was veteran catcher Ted Simmons, the reigning NL Player of the Week. Over the previous six games, “Simba” had batted .400 (8-for-20) with three home runs and seven RBIs.

“Player of the Week, that’s nothing,” Cardinals broadcaster Mike Shannon said prior to the Monday night game at Dodger Stadium. “He’s going to be Player of the Month.”3

After the Cardinals beat the Dodgers, 9-7, Simmons surely would have had the vote of the two-time defending NL pennant winners. The switch-hitter belted two home runs — one from each side of the plate — including a grand slam, and had six RBIs to power the Cardinals to their fourth win in as many games against Los Angeles in 1979. Both were career highs for Simmons, who was elected to the National Baseball Hall of Fame in 2020.

The Dodgers (28-33 — fourth in the NL West, eight games behind the Houston Astros) were coming off a 2-7 road trip to St. Louis, Pittsburgh, and Chicago. But they jumped on Cardinals starting pitcher Bob Sykes with three runs in the bottom of the first inning. Davey Lopes led off with his NL-leading 17th home run of the season, deep over the left-field wall. With two outs, Steve Garvey walked and Ron Cey socked his 11th homer, also to left.

Los Angeles starter Jerry Reuss, making his second straight start after 17 relief appearances, was the beneficiary of the uprising, but the lead lasted only until the third inning. Reuss hit Sykes leading off the third5 and one out later clipped Lou Brock with a pitch. Keith Hernandez singled to load the bases, and Simmons, batting right-handed, followed with a grand slam — the sixth of his career — just inside the left-field foul pole to give the Cardinals a 4-3 advantage. George Hendrick continued the rally with a ground-rule double and scored on a Tony Scott single that knocked out Reuss with St. Louis leading, 5-3.

The teams exchanged solo home runs in the fourth — Brock hitting his fourth of the season against Dave Patterson and Dusty Baker connecting against Sykes for his seventh — to make the score 6-4. St. Louis padded its lead in the sixth against Ken Brett on a one-out double by Garry Templeton and a two-out RBI single by Hernandez. Brett had signed with the Dodgers that day after being released by the California Angels and Minnesota Twins earlier in the season.

Trailing 7-4 in the seventh, the Dodgers pulled even. Pinch-hitter Manny Mota singled leading off and Bill Russell’s one-out double put runners at second and third. Reggie Smith drove them both in with a double to end Sykes’s night. Garvey greeted reliever Mark Littell with a double that scored Smith to tie the game.

The Dodgers appeared to have momentum on their side as the game headed to the ninth. But Lerrin LaGrow walked Hernandez with one out. Simmons, now batting left-handed against the right-hander LaGrow, homered deep into the right-field bleachers on a 1-and-1 pitch for a 9-7 St. Louis lead. “I wasn’t thinking home run, but I was thinking [Simmons] is going to hit it hard somewhere,” Hernandez said.6

Both of Simmons’s blasts came against former St. Louis batterymates — Reuss pitched for the Cardinals from 1969 to 1971 and LaGrow did so briefly in 1976.

“I’m getting to the point where I know what I’m doing,” Simmons said. “The Man [upstairs] gave me some good tools. And you don’t mess with The Man.”7

Bruno, who took over for Littell in the eighth, pitched two scoreless innings to earn the win. He allowed a single and a walk in what would prove to be the final victory of his four-year major-league career.8 Left fielder Jerry Mumphrey helped out Bruno (2-2) with a diving catch of a ball off the bat of Garvey, representing the tying run, to wrap up the 2-hour, 23-minute affair played in front of 32,159 fans.

Simmons’s memorable performance, which also included a second-inning single, gave him 16 home runs and 45 RBIs for the season, both fourth-best in the NL. He had been intentionally walked a league-high 11 times.9 Although he did not win Player of the Month honors — George Foster of the Cincinnati Reds did — Simmons did earn his third straight All-Star Game selection and sixth overall. He was voted by the fans to start the midsummer classic for the first time but was unable to play after suffering a broken bone in his left wrist on June 24.10

“What we are in is the nitro zone,” Simmons said. “I think we could win, and I think people on other teams think we can win.”11

The wrist injury sidelined Simmons for four weeks and limited him to 123 games in 1979, yet he still totaled 26 homers (a career high and a franchise record for a catcher) and 87 RBIs to go with a .283 batting average. After the season, Simmons played for the NL All-Star team that toured Japan in November, and he topped the all-stars with three homers and eight RBIs.

Sykes, in his first season with the Cardinals, injured his left (throwing) shoulder against the Dodgers, was placed on the disabled list the following day and underwent surgery for removal of a blood clot on June 19. He began a minor-league rehabilitation assignment July 26 and was recalled to the parent club on September 1.12

With 9-3 and 9-8 wins the next two nights, the Dodgers claimed the series over the Cardinals,13 who won just one more time on their nine-game West Coast swing. They were swept in a three-game series by the San Francisco Giants and lost two of three to the San Diego Padres. The lone victory came on June 19, a 7-2 complete-game victory by John Fulgham in his major-league debut. St. Louis went on to finish the season with an 86-76 record and in third place in the NL East — 12 games behind the eventual World Series champion Pittsburgh Pirates — one season after losing 93 games.

Despite taking two of three from the Cardinals, the Dodgers were in the midst of a rocky 10-31 stretch from June 1 to the All-Star break that saddled them with a 36-57 record at the unofficial halfway mark, last in the NL West, 17½ games behind the Astros. Los Angeles salvaged a 43-26 record in the second half to finish 79-83 and in third place, 11½ games behind the division-winning Reds.

In addition to the sources cited in the Notes, the author used the Baseball-Reference.com and Retrosheet.org websites for player, team, and season information, as well as batting and pitching game logs and the box scores for this game:

5 Sykes had hit Reuss with a pitch in the bottom of the second inning. The St. Louis Post-Dispatch reported that in spring training, Reuss, then with the Pittsburgh Pirates, hit Simmons with a pitch. “It just got away,” Sykes said. Simmons said, “That’s right,” with a wink, then adding, “[Reuss] should have let Sykes alone.”

8 Bruno made four more appearances for the Cardinals before being optioned to their Triple-A farm club in Springfield, Illinois, on June 24. He was recalled on September 1 and subsequently pitched in his final two games as a big leaguer.

12 Sykes made two appearances, including one start, for the Cardinals after his September recall.

13 The Cardinals and Dodgers wound up splitting the 12 games they played in 1979.