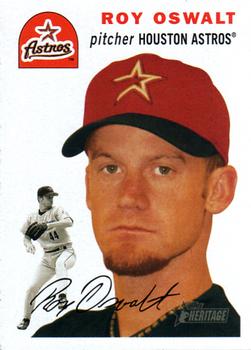 The Yankees’ starter was Jeff Weaver, who was making his first start in 12 days. He allowed a first-inning leadoff double to Craig Biggio. Biggio moved to third on a fly ball and scored on a wild pitch by Weaver with two outs. The Astros added a run in the second on a triple by Orlando Merced and a sacrifice fly by Jose Vizcaino. Roy Oswalt, the Astros’ ace, started off strong, retiring the Yankees in order in the bottom of the first, striking out Derek Jeter and Jason Giambi. But Oswalt had to leave the game with a groin pull after only two pitches in the bottom of the second inning.

The Yankees and their fans might have been optimistic that this would be a high-scoring game with Oswalt gone. Instead, “what seemed like a potential blowout became the first no-hitter against the Yankees in the Bronx since 1952.”2

Jimy Williams, the Astros manager, sent reliever after reliever into this unexpected situation, and each man kept putting zeroes on the scorecard. Peter Munro came in to pitch for Oswalt. He walked Jorge Posada on a full count, then retired Robin Ventura, Hideki Matsui, and Todd Zeile in order.

Houston kept the pressure on Weaver. Geoff Blum singled to begin the third inning, and with two outs Lance Berkman launched a home run, giving the Astros a 4-0 lead. With two outs in the bottom of the fourth inning, Munro walked Zeile. Williams pulled Munro in favor of Kirk Saarloos, who got Raul Mondesi to fly to left field for the third out.

The closest the New Yorkers came to getting a hit was in the bottom of the fifth inning. Alfonso Soriano lined a 1-and-1 pitch from Saarloos into left field. Left fielder Berkman “ran in, stuck out his glove and made a tumbling catch.”3 Berkman played the line drive down, stating, “It wasn’t that close. It probably looked more spectacular than it really was.”4 According to the New York Times, “Berkman dived forward like a punt returner protecting a football on the 10-yard line and made a nifty catch.”5

Brad Lidge became the fourth Houston pitcher in the top of the sixth, and in two innings he faced six batters, getting six outs, including strikeouts of Zeile and Mondesi to end the seventh. In the Astros’ seventh inning, two singles and an error by Jeter led to the fifth Astros tally and chased Weaver. Chris Hammond came out of the Yankees bullpen and retired Jeff Kent and Berkman to end the inning. Jason Anderson became the third Yankees hurler in the eighth and allowed a run on a double to Richard Hidalgo, who motored to third on a wild pitch and scored on a single by Brad Ausmus.

In the home half of the eighth inning, Williams called on Octavio Dotel, the hard-throwing set-up man in the Astros bullpen. He threw three pitches past Juan Rivera for out number one. Soriano fouled off three straight pitches before swinging and missing at a wild pitch in the dirt. The ball got past Ausmus, and Soriano raced to first base, safe. Derek Jeter took Dotel to a full count, then struck out swinging. Giambi fouled off a few pitches and then whiffed on a 2-and-2 count. Four strikeouts in an inning, all swinging.

Dotel became the 45th major-league pitcher to strike out four batters in one inning. Later he said, “I knew that we had a no-hitter but I didn’t feel any pressure because I said if they get a base hit, who cares? There were five of us. It’s not like one person was throwing a no-hitter. It’s kind of different, but it’s good too.”6 By this time, fans were exiting the Stadium, “obviously not wanting to see the Yankees on the dubious end of history.”7

The Astros added two more runs in the top of the ninth. Alberto Reyes yielded Hidalgo’s two-out double, which plated Jeff Bagwell and Berkman. The score was now 8–0.Even with the big lead, the bottom of the ninth meant it was time for Billy Wagner, the Astros’ closer. He struck out Posada and pinch-hitter Bubba Trammell. That meant that Astros pitchers had struck out eight Yankees batters in a row, the seventh and eighth Yankees in a row to fan.

The previous five pitchers had all gone to the clubhouse after being replaced. They “were afraid to jinx the no-hitter by leaving the clubhouse and joining their teammates on the bench,” so they watched Wagner pitch a 1-2-3 finale on the monitor instead of watching it live. When Matsui grounded Wagner’s first pitch to first baseman Bagwell, who flipped the ball to Wagner covering first base for the final out, they stormed the field, some in shorts and T-shirts.  Five of the pitchers (all but Oswalt) posed in front of the dugout for a photo.

Wagner was awestruck about the whole experience. “Your first appearance in Yankee Stadium, and it’s a no-hitter, and you’re part of it. It doesn’t get any better than that. That’s a storybook ending for our bullpen to go out and battle. To be able to achieve something like that, it’s really special.”8 After the on-field celebration, the Astros filed back to the clubhouse. To their amazement, the Yankees had placed bottles of champagne in front of the six pitchers’ lockers. Wagner appreciated that, saying, “That’s how the Yankees are, they’re pretty classy.”9

The Yankees managed six baserunners: three walks, a hit batsman, a batter who reached on an error, and Soriano’s dropped third strike. All three walks were given up by Munro. “I was a little erratic,” he said after the game. “I was walking some guys, and that was probably why. It’s a good thing I didn’t do too much damage.”10

Astros manager Williams also admitted to the press, “I’ll be very honest with you. I didn’t know they didn’t have any hits until the seventh. We had already used four pitchers, and we got a lead and were trying to win this game. I knew they had a lot of baserunners, so when you have baserunners you think, ‘Well somebody must have gotten on with a hit.’Then I looked up there and there was a zero there. I started trying to remember when they got a hit.”11

This was the first time that more than four pitchers had combined for a no-hitter.12 The Orioles’ Hoyt Wilhelm had no-hit the Yankees in Baltimore in 1958, and this game marked the first in 7,048 games in which the New York team had been no-hit, and it was the last as of 2015. It was played on the 65th anniversary of the first of Johnny Vander Meer’s two consecutive no-hitters. It was the second no-hitter of the 2003 season, and the third in interleague play (including the Yankees’ Don Larsen’s perfect game in the 1956 World Series against the Brooklyn Dodgers).13

After the game, Yankees skipper Joe Torre told reporters, “There’s no question that (the New York Yankees) weren’t very good tonight, but you don’t want to diminish how well they (the Houston Astros) pitched.”14  He added, “This is one of the worst games I’ve ever been involved in.”15 The loss caused New York to relinquish first place in the American League East, falling a half-game behind Boston. Astros pitchers struck out 13 Yankees batters, including Jeter three times and Giambi, Ziele, and Mondesi twice each. On the other side, every starting player for Houston got at least one hit. Ausmus led the way with a 3-for-4 effort.

Saarloos, who pitched the fifth inning, did not earn the win. Since the starter, Oswalt, departed early and did not pitch five innings, the official scorer decided who would get the victory, and he gave the W to Lidge, who pitched the sixth and seventh innings, striking out a pair and not allowing any Yankee to reach base. Ten years after the game, Saarloos said in an interview, “Every once in a while I joke around about how I threw a no-hitter at Yankee Stadium and that I’m in the Hall of Fame. I leave some of the details out.”16

13 The first no-hitter of the 2003 campaign was by Philadelphia’s Kevin Millwood against San Francisco on April 27. Millwood was also involved in the 2012 six-pitcher no-hitter. (See Note 12.)