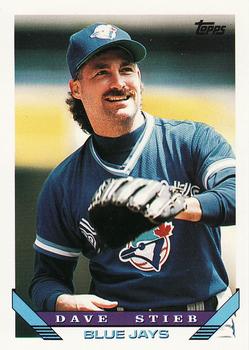 Like many former players, Dave Stieb was invited to spring training with the Toronto Blue Jays as a guest instructor in 1998. There he would join several teammates and pass along to the next generation of major leaguers the knowledge he had gained during his 15 years in the big leagues.

Unlike the other former players, though, Stieb discovered he still had major-league talent after he arrived in Dunedin, Florida.

And so started one of the more improbable comebacks in baseball history, which came to fruition at Camden Yards on June 18 when Stieb pitched a scoreless — albeit stressful — ninth inning to finish off a 13-6 victory over the Baltimore Orioles in his first big-league appearance since retiring with a clunky elbow after the 1993 season.1

“He was a real cocky arrogant kid back then,” said Tim Johnson, Toronto’s first-year manager, referring to Stieb’s rookie year in 1979, when Johnson was in his final season as an infielder with the Blue Jays. “He thought he was better than anybody. That’s one of the reasons I thought if anyone could come back like this, he could.”2

Stieb’s fastball had lost some velocity and his slider wasn’t as vicious as it was when he was piling up 174 victories between 1979 and ’92 as the winningest pitcher in Blue Jays history, but at 40 years old, he was a major-league pitcher again.

It all started in March when Stieb came to spring camp “with the intention of throwing a little bit and seeing what it looked like.”3 Once he had received positive feedback from bullpen coach Sal Butera4 after pitching batting practice, that intention turned into a full-fledged comeback.5

“He was shaking his head yes before I said a word,” Stieb recalled of when he approached Johnson with the idea. “I said, ‘What are you shaking your head yes for? You don’t know what I’m going to say.’ He said, ‘I know what you’re here for and I think it’s a great idea.’ Next thing I know, I’m at the (minor league) complex with all the young kids and I’m going, ‘What have I done?’ I felt like I was stuck.”6

Stieb eventually landed at Toronto’s Triple-A affiliate in Syracuse. That’s where he went 5-4 with a 2.73 ERA in nine starts, including a pair of complete games. Those numbers caught the attention of the Texas Rangers, who were entrenched in a tight battle with the Anaheim Angels in the American League West Division. Stieb’s contract provided that if any other team expressed interest in him, the Blue Jays had to promote him within 48 hours or let him walk away.

And so began the final chapter of Stieb’s career in Toronto.

“There were certain steps to take in pursuing this, and this was the biggest objective,” Stieb said. “First I had to see how my body would hold up … then I had to see how my stuff would progress. All that happened and it’s great to finally reach this point.”7

Stieb needed 22 pitches to get through the ninth inning in the blowout victory over the Orioles, but it wasn’t the easiest inning of his career. He allowed back-to-back singles to Chris Hoiles and Mike Bordick before retiring Brady Anderson and Eric Davis, but Harold Baines beat out an infield single to finish a 4-for-5 effort and load the bases.

But Lenny Webster flied out to left to end the game and give the Blue Jays sole possession of third place in the AL East.

“Same old Stieb. Lots of sliders,” said Webster, who never faced Stieb in limited action as a young player with the Minnesota Twins from 1989 to 1993. “His slider wasn’t as good as it used to be, but it was good enough.”8

Both teams came into the game with 34-37 records and held fading aspirations of chasing down the Boston Red Sox and New York Yankees, who maintained the top two records in the American League.9 A sellout crowd of 47,374 was on hand for the first game of a four-game series.

The Blue Jays wasted no time starting off their best offensive output of the season.10 Shannon Stewart and Shawn Green led off the game with back-to-back singles to put men on the corners, and Green swiped second uncontested for an immediate scoring threat. After Jose Canseco popped out to the catcher in foul territory, Baltimore starter Doug Johns and Hoiles got their signals crossed, and a passed ball allowed Stewart to score. Carlos Delgado lofted the next pitch to center for a sacrifice fly that brought home Green and staked Toronto starter Chris Carpenter to a 2-0 lead.

Baines hit a two-out single in the bottom of the first, but Carpenter retired the next 13 hitters in order.

Toronto’s number-9 hitter Alex Gonzalez led off the third with a double to center, advanced to third on Stewart’s sacrifice, and scored when the fourth ball of Canseco’s walk sailed wildly to the backstop. Canseco stole second for his 20th steal, giving him 20 home runs and 20 steals in a season for the third time in his career.

The Blue Jays continued their odd-inning barrage in the fifth. Mark Dalesandro led off with a single and moved to second on a sacrifice by Gonzalez. Stewart ripped the next pitch down the third-base line for an RBI double. He stole third, and after Green struck out, Canseco was intentionally walked to set up a potential double play.

Delgado had other ideas.

He smashed a double to right for a 5-0 Toronto lead that chased Johns from the mound. Terry Mathews relieved and induced a Mike Stanley groundout to end the inning. Mathews looked sharp to open the sixth, but after two quick outs, he walked Dalesandro and allowed consecutive singles to Gonzalez, Stewart, and Green to give Toronto a 7-0 lead.11

Baltimore got on the board in the bottom of the sixth when Hoiles drew a leadoff walk, and Davis and Baines hit two-out doubles for a pair of runs. But any momentum the Orioles may have picked up in that small rally was quashed in the seventh.

Toronto blasted reliever Norm Charlton for five runs in the inning on an RBI double by Tony Fernandez, a two-run double by Dalesandro, and a two-run homer by Gonzalez. With a 12-2 lead, the chances of Stieb returning to the mound on his first day back with the team rose exponentially.

“I’m just glad to get him in a situation like this (with a big lead),” Johnson said after the game. “All the newness is now gone. I just wanted to get him in there.”12

Baltimore chipped off a run in the seventh when Roberto Alomar led off with a double and scored on a single by Hoiles, but Toronto answered with Stanley’s solo homer off Armando Benitez to lead off the top of the eighth.

Carpenter entered the eighth having thrown just 92 pitches, but his bid to get through eight innings for the first time in 1998 soon withered. Anderson took Carpenter’s first offering of the frame to right for a single, and Davis blasted the next pitch into right for a double. Baines poked a grounder between second and short to drive home two runs and end Carpenter’s outing.

“I think I got a little tired and got away from my game plan,” said Carpenter, who was charged with six earned runs on nine hits and a walk, statistically spoiling his efficiency in the early going. “It was something I’ll take away from this game.”13

Two batters later, Alomar hit an RBI double off Luis Andujar for the final scoring of the game.

Gonzalez led off the top of the ninth needing a triple to complete the cycle. Facing another relic of the game — 41-year-old reliever Jesse Orosco, who, like Stieb, had debuted during the 1979 season — he was unsuccessful in becoming the second player since 1901 to hit for the cycle from the bottom of the order.14

“I’ve never done that, not in little league or any other place,” said Gonzalez, who had extended his hitting streak to seven games. “I thought about (the cycle) and I was waiting for my pitch the last time up, but I didn’t get it.”15

With the game comfortably in hand, Johnson handed over control to Stieb, the two-time All-Star Game starter who had made just 15 relief appearances in his career. By season’s end, Stieb went 1-2 over 19 appearances (three starts) and became the second-oldest player to ever appear for the Blue Jays.16 He announced his second retirement on February 17, 1999.

“It was fun to start all over again and make it the same exact way I did 19 years earlier,” he said. “I’ve never had a déjà vu experience like that in my life — so many things that were the same. So it was exciting again, and it was cool to do that at 40 years old. But I realized at the end of that season that man, it’s a lot harder throwing with the stuff I had. It wasn’t vintage Dave Stieb stuff.”17

1 Stieb’s major-league debut also played out in Baltimore, when he took the loss on June 29, 1979, in the first game of a doubleheader. He allowed six runs (five earned) on six hits and two walks and struck out five in a 6-1 loss to the Orioles.

4 In 1988 Butera spent the latter half of the season as Toronto’s backup catcher and was Stieb’s batterymate in four starts.

10 Toronto’s 13 runs tied its best mark of the season so far and the 18 hits were a season high, though the Blue Jays bettered both marks later in the year.

11 Mathews hadn’t pitched since June 1. He was sent to the minors at the end of June after posting a 6.20 ERA in 17 appearances.

16 Stieb was 41 years, 2 months, and 3 days old when he made his final appearance on September 25, 1998, and through 2020, he’s fallen to be the sixth-oldest player to appear for Toronto. Hall of Famer Phil Niekro is the oldest player in Blue Jays history at 48 years, 4 months, and 28 days.