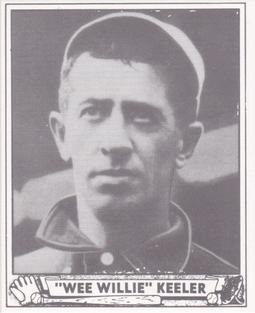 Over three days, June 19-21, the Republican Party held its 1900 National Convention in Philadelphia. It was a confident and celebratory affair. Under President William McKinley the nation had successfully conducted a “splendid little war”1 against Spain while the economy was roaring again. New York Governor Theodore Roosevelt, whose war heroics remained fresh in the public’s consciousness, allowed party leaders to place him alongside McKinley at the bottom of the ticket.

Run by a reliable Republican machine, the host city raised the $100,000 requested by GOP kingpin Mark Hanna for the privilege of hosting the affair. Conventioneers were feted with parades, river excursions, and banquets. Philadelphia also showcased baseball for the conventioneers. The Phillies were hosting the Brooklyn Superbas in a decisive battle for first place.

Whether they were visiting Republicans, or Philadelphians of any political stripe, few cranks2 could have been surprised to see the Superbas in contention. After manager Ned Hanlon, outfielders Willie Keeler and Joe Kelley, and infielder Hughie Jennings arrived in Brooklyn from the original Baltimore Orioles, the Superbas had captured the 1899 pennant. With their veteran execution of the era’s inside game and with new ace Joe McGinnity, the Superbas were favorites to repeat.

More surprising was that the Phillies, too often dysfunctional underachievers in the past, were living up to their potential. With Roy Thomas leading off and Ed Delahanty, Nap Lajoie, and Elmer Flick in the heart of the order, the Phillies possessed the league’s finest offense. Through May they averaged 7.75 runs per game and stood four games up on Brooklyn with a 22-10 record. Then injuries beset Philadelphia. On May 31 Lajoie broke his left thumb in a clubhouse fight with Flick. On June 11 third baseman Harry Wolverton slipped on the bicycle track that surrounded Philadelphia’s playing field and broke a bone in his arm. With a shaky pitching staff, these losses loomed large.

With a 12-2 run to open June, the Superbas surged past the Phillies, albeit by only a half-game, when the series opened on Wednesday, June 20. A healthy crowd of 7,195 attended.3 Of the visiting fans, an onlooker noted, “[J]udging from their badges, every State in the Union must have been represented.”4 They were in for a treat. Both teams fielded well, while the offenses repeatedly tested the pitchers. Yet, while Brooklyn’s Bill Kennedy outpitched Philadelphia’s Chick Fraser, the latter worked out of jams in the eighth and ninth innings while the former yielded a two-out, three-run homer to Flick in the fifth. Hanging on, 5-4, the Phillies moved back into first.

At 2:14 the next afternoon, a final gavel concluded the Republican convention in its West Philadelphia hall. As the 20,000 attendees began to file out, some again hopped on streetcars for the five-mile journey to the Phillies’ National League Park in the northern reaches of the city.

After holding out that spring, Brooklyn’s starting pitcher for the second game of the series, southpaw Jerry Nops, had landed in the rotation in late May. The results had not been encouraging: Nops won only one of his first three starts.5 Philadelphia’s starter, Al Orth, had also struggled. The Phillies had won only four of his 11 starts.6 His last start, versus the Giants on June 16, was especially disconcerting: Leading 5-2 with two outs in the ninth, Orth yielded five straight singles to lose, 6-5.7

In the second, Brooklyn picked up a run when Deacon McGuire’s fly ball scored Dahlin. In the bottom of the third, Philadelphia squeezed three runs out of five singles. Brooklyn missed opportunities in the third: Fielder Jones was caught stealing and, after a subsequent triple, Keeler was caught in a rundown when Jennings grounded to third. After three, Philadelphia led, 5-1.

Brooklyn came back somewhat in the fifth to get to a 5-3 deficit. Jones opened with a single, advanced to second with Keeler’s out, and to third on a passed ball. Orth walked Jennings. The two Superbas executed a double steal, with Jones following his pretty slide by “very thoughtfully sitting all over” catcher Douglass, allowing Jennings to scamper to third.8 Kelley’s grounder to shortstop Monte Cross brought Jennings home.

In the Philadelphia seventh, with the bases loaded, Kelley made “a wonderful catch of [Joe] Dolan’s terrific line drive to the extreme left corner of the field.”9 Flick came home. It was now 6-3, Philadelphia.

From the onset, the game proceeded slowly, in considerable part due to the notoriously slow-working Nops. Batters worked counts and engaged in delaying tactics like walking to the bench for a new bat after fouling off several pitches. The match’s grinding nature, and its defensive lapses and careless baserunning, tested the patience of the 7,487 in attendance. “All hands performed like a lot of Nebraska delegates who had been sleeping two in a cot in the attic of a third-rate hotel,” wrote Charles Dryden in the Philadelphia North American.10

Mustached and grinning toward the plate with a “Roosevelt smile,” Orth shut down Brooklyn in the sixth, seventh, and eighth innings.11 The large crowd began to shrink. Out-of-towners had travel plans. Local fans hungered for dinner.

As the game ground on into the ninth inning, Jimmy Sheckard, batting for Nops, flied out as Brooklyn’s leadoff hitter. But Jones ripped a double to center and Keeler dragged a bunt down the third-base line for a single. Jennings singled to center to bring home Sheckard. Douglass’s fumbling with one of Orth’s offerings facilitated a double steal by Keeler and Jennings. Both scored as Kelley launched another double to center, taking third on Thomas’s poor throw to the infield.

With the score now tied, 6-6, captain Delahanty called for Bill Bernhard to replace Orth.12 Dahlen singled to bring home Kelley. Two wild pitches later, Dahlen occupied third. Cross walked but was caught stealing at second. Daly singled to bring in Dahlen. McGuire, the ninth Superba to march to the plate in the rally, grounded out. But Brooklyn had forged an 8-6 lead.

It ended that way as Frank Kitson replaced Nops; he retired the Phillies in order as Jones made two fine catches in center field.

The next day, an Evening Bulletin sportswriter chastised the home team. Acknowledging that the Phillies “have one of the hardest hitting teams ever put together,” the scribe added “they must not forget that team work is absolutely essential to success, and the captain should not hesitate to take any player out of the game if, by so doing, he can improve his chance of winning.”13 Specifically, “it was apparent to nearly everybody on the grounds, including the Brooklyn players, that Orth had reached his limit in the eighth inning.”14 Indeed, while Philadelphia pitchers completed 116 games in 1900, Brooklyn’s completed 104 — the third lowest percentage of complete games by a team since 1890.15 The commentator also praised the Superbas for their baserunning, adding that “the Phillies would materially improve their chances if they would imitate the champions’ aggressive style.”16

With the convention over, a smaller crowd of 5,682 attended the series finale on Friday. The wild affair, featuring two four-run Philadelphia rallies in the eighth and ninth, went into extra innings tied, 13-13. After a scoreless 10th, Brooklyn rallied for three runs in the top of the 11th. At that point, with some 90 minutes to go before an 8 P.M. train to Boston, Philadelphia captain Delahanty instructed rookie twirler Bert Conn to walk batters, with the hope that umpire Hank O’Day might call the game as a 10-inning tie. Three Superbas earned such passes, forcing in another run. Seeing that no one would apply a tag to them, the trio simply trotted around the bases, making the score 20-13. Phillies fans began to jeer and hiss the travesty. Brooklyn batter Harry Howell swung futilely at Conn’s offerings attempting to register the final out. After the third strike, Phillies catcher Ed McFarland dropped the ball and threw it deep into right field. A disgusted O’Day called the game as a 9-0 forfeit to Brooklyn.17

The Phillies caught their train and went 5-13 on their three-week road trip to fall into fourth place, seven games behind the Superbas. Brooklyn held onto first for the remainder of the campaign. Pittsburgh threatened in September, but Hanlon effectively used McGinnity in both starts and relief down the stretch to fend them off.18

1 This description of the Spanish-American War is attributed to Secretary of State John Hay. nps.gov/prsf/learn/historyculture/spanish-american-war-a-splendid-little-war.htm, accessed July 8, 2020.

12 Philadelphia manager Bill Shettsline, since coming into the role from the front office, delegated such on-field decisions to his captain.