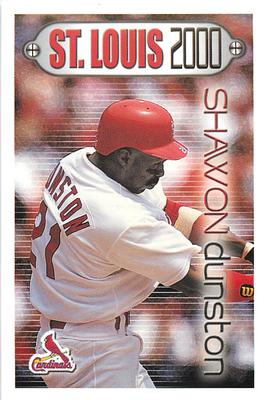 Perhaps distracted by a heavy swarm of moths, a perennial Gold Glove winner committed a fielding blooper that gave Shawon Dunston an unlikely three-run home run against the San Francisco Giants in June 2000. The bizarre play – which gave Dunston a two-homer, six-RBI night – helped the St. Louis Cardinals rally from seven runs down to beat the Giants 11-10 in a wild game at Busch Stadium.

After being the Cubs’ primary shortstop1 from 1985 to 1995, Dunston had bounced around the majors ever since. He had played for six teams since leaving the Cubs, including stints with the Giants in 1996 and 1998 and the Cardinals in 1999 before being traded to the New York Mets that July. The 37-year-old veteran had returned to St. Louis as a free agent for the 2000 season and filled in where needed, serving as a utility infielder, reserve outfielder, and pinch-hitter.

The previous night, San Francisco left-hander Kirk Reuter had held St. Louis to a single run in seven innings of a 4-1 win at Busch Stadium. But that game was the exception rather than the rule – the Giants were just 4-13 on the road since May 12, including a 7-2 loss to the Cardinals in the first game of the series, on June 20.

The Giants were in fourth place in the National League West with a record of 34-33, five games behind first-place Arizona. The Cardinals entered the game at 40-30, having won seven of their last nine, and led the NL Central by 6½ games over Cincinnati.

Hentgen held the Giants scoreless through the first four innings despite allowing multiple baserunners. He worked around back-to-back walks to Bill Mueller and Barry Bonds in the first inning and singles by Armando Rios and Bobby Estalella in the second.

After Hentgen set the side down in order in the third, the Giants looked to take the lead in the fourth when J.T. Snow walked and Rios doubled to put runners on second and third with no outs. But Hentgen escaped the threat. He retired Rich Aurilia on a fly ball and intentionally walked Estalella to load the bases. Estes bounced into an around-the-horn double play to end the inning.

Unlike Hentgen, Estes was sharp early. He retired the first 11 Cardinals, but his streak came to an abrupt end when Mark McGwire connected for a 475-foot homer. The blast was the 548th of McGwire’s career, tying him for seventh place on the all-time list with Mike Schmidt.2 The homer was McGwire’s 26th of the season, tying him for the league lead with Bonds.3

Trailing 1-0, the Giants finally got to Hentgen in the top of the fifth. With one out, Mueller and Bonds again drew consecutive walks. After striking out in his first two trips to the plate, Jeff Kent – in his third at-bat of the game and the 4,000th of his career4 – hammered the first pitch to center field for a three-run homer.

Hentgen walked Snow and, one out later, gave up a single to Aurilia and a walk to Estalella to fill the bases for Estes again. This time, Estes doubled on a groundball to left field to score Snow and Aurilia, pushing the Giants’ lead to 5-1.

Despite his four scoreless frames to start the game, Hentgen’s night ended with eight earned runs allowed in 4⅔ innings. It was the first time a Cardinals starter had failed to last five innings since May 12, ending a string of 29 consecutive games.5

Trailing 8-1 in the fifth, the Cardinals started their comeback. During the eight-run outburst by his teammates in the top of the inning, Estes’ pitching shoulder had tightened.

“The long inning, it really stiffened up on me,” Estes said later. “In warmups, it didn’t feel good at all. I just wanted to get through five [innings] and tell them about it, and go from there, but I didn’t make it.”6

He faced six batters in the fifth without recording an out. Craig Paquette led off with a walk. Mike Matheny and Placido Polanco singled to fill the bases with no outs. Larry Sutton walked to force in Paquette, and a wild pitch scored Matheny.

Batting in the leadoff spot for the first time all season,7 Dunston had flied out and struck out against Estes in his first two at-bats. This time, he ripped a two-run double to left-center. The drive made the score 8-4 and knocked Estes from the game.

John Johnstone took over on the mound for the Giants and retired the next three batters, including strikeouts of McGwire and Eric Davis.

Snow homered against Slocumb to start the sixth inning, extending St. Louis’s lead to 9-4, but the Cardinals cut the deficit back to three in the bottom of the frame on Paquette’s sacrifice fly, scoring J.D. Drew, who had pinch-hit for Slocumb and legged out a triple.

After San Francisco stranded two runners in the seventh, St. Louis trimmed another run from the lead in its half of the inning when Dunston drove in his third run of the night with a solo homer off reliever Aaron Fultz.

With the Cardinals trailing 9-7, Matheny doubled with one out in the eighth against Felix Rodriguez. Polanco followed with a single to put runners at the corners.

After Sutton went down swinging for the second out, Dunston hit a high fly toward left field.

Fighting the fog from a swarm of moths that had invaded Busch Stadium when the sun set midway through the game, Bonds drifted back to the warning track. The ball came down well short of the fence, but Bonds jumped anyway. The ball hit the heel of his glove, and he pushed it over the wall for a three-run homer.

As a shocked Bonds stood near the wall with his mouth open and his hands on the top of this cap,8 Dunston was hustling around the bases hoping for a triple.

“It was so high, and it just kept going and going. Barry is the best left fielder in the game. I thought he might catch it,” Dunston said later of the eight-time Gold Glove winner.9

“You know, my dad told me if you play long enough in your career, something’s going to happen,” Bonds reflected after the game. “I used to watch this on TV. Well, now I get to be on the bloopers reel.”10

Baker added, “It was like the Twilight Zone. One of the weirdest things I have ever seen.”12

Cardinals closer Dave Veres came in to finish the game but gave up singles to Benard and Bonds. Kent tied the score, 10-10, with his league-leading 70th RBI13 on a line-drive single to right field.

Mark Gardner took over for the Giants in the bottom of the ninth and hit McGwire with his first pitch. Eli Marrero ran for McGwire and moved to third base on a one-out single by Ray Lankford.

In a game that featured 12 extra-base hits, the game-winning run scored on an infield single by Craig Paquette that didn’t get past the pitcher’s mound.

On a 2-and-1 pitch, Paquette smacked a hard one-hopper back up the middle that went off Gardner’s glove and bounced toward the third-base line, allowing Marrero to score the winning run.

“I never saw it, just felt it,” said a frustrated Gardner. “That’s exactly what happened. A groundball. I was thinking double play.”14

Cardinals starter Hentgen was appreciative of his teammates’ comeback. “I basically gave the game to the Giants and they turned around and snatched it back,” he said. “That was awesome.”15

Dunston finished the 2000 season with St. Louis before returning to San Francisco as a free agent. He played his final two seasons with the Giants, batting .258 in 160 games, and retired after their loss to the Angels in the 2002 World Series.

The author attended this game on a summer vacation with his wife (who was seven months pregnant) and his 3-year-old daughter – who sat on the edge of her seat, dangling her legs and exclaiming, “Hit dat ball, Mark Aguire!”

1 Dunston was the first pick overall in the 1982 major-league draft.