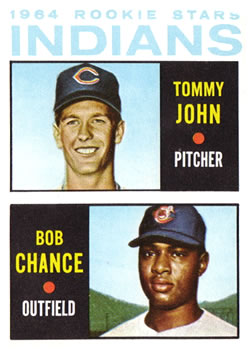 Official records will tell you that Tommy John made his first appearance for the Cleveland Indians — and the first of his 760 appearances in the major leagues — on September 6, 1963, working an inning of relief in a 7-2 loss to the Washington Senators in Washington.

But more than two years earlier, 21,885 fans in Buffalo, New York, had watched John pitch for the Indians in an exhibition. The 18-year-old hurler worked in relief for Cleveland on June 26, 1961, in a 2-0 loss to a team of all-stars from the Triple-A International League.

The 1961 game marked the sixth annual matchup between a big-league team and the IL All-Stars. The minor leaguers, after a slow start, had won the previous two games, defeating the Pittsburgh Pirates in 1959 and the Milwaukee Braves in 1960.1 The turnout in Buffalo set a record for the city’s largest baseball crowd. It also handily topped the earlier record of 15,957 for the exhibition series, set at the 1957 game in Montreal.2

The big leaguers, of course, had little to gain and much to lose from playing the exhibitions competitively. Manager Jimmy Dykes’ Indians came into the game in third place, with a 41-30 record, just five games behind the front-running New York Yankees. They were banged up, with center fielder Jim Piersall nursing an arm injury, second baseman Johnny Temple slumping, and shortstop Woodie Held sore-legged.3 Those players, plus catcher John Romano, all sat out the exhibition.4 Notables who did play for Cleveland that night included left fielder Tito Francona, first baseman Vic Power, third baseman Bubba Phillips, and right fielders Willie Kirkland and Chuck Essegian.

Big-league teams commonly added minor leaguers to their pitching staffs for exhibitions, to spare wear and tear on their regular pitchers. Dykes decided to “call up” several prospects for a look. He gave the start to 24-year-old Sonny Siebert, a third-year pro who went 6-9 with a 5.30 ERA between two levels of minor-league ball in 1961. Dykes also informally promoted John, who had signed with Cleveland two weeks earlier as an amateur free agent. At the time, John had made a single pro start with the Dubuque (Iowa) Packers of the Class D Midwest League.5 Twenty-year-old rookie Floyd Weaver was also summoned to become a temporary Indian. He went 7-6 with a 4.00 ERA between two minor-league levels that season.

Toronto Maple Leafs manager Johnny Lipon led the IL All-Stars. The best-known name on their roster was probably 22-year-old Richmond shortstop Tom Tresh, who hit .315 that season and earned a late-season call-up to the Yankees. Tresh won the American League Rookie of the Year Award the following season, hitting .286 for the World Series-winning Yanks.

Forty-five-year-old Luke Easter of the Rochester Red Wings, seven seasons past his last big-league appearance, was on the team. So was 39-year-old Buffalo reliever Max Surkont, who last played in the majors in 1957, and 29-year-old Syracuse first baseman Joe Altobelli, later the manager of the 1983 World Series champion Baltimore Orioles. The start went to 23-year-old right-hander Ray Washburn, then playing for the St. Louis Cardinals’ Triple-A affiliate, which split time between San Juan, Puerto Rico, and Charleston, South Carolina. Washburn’s outstanding performance — 16-9 with a 2.34 ERA — earned him his first major-league call-up later in the season.

Washburn began the game by giving up a single to second baseman Mike de la Hoz. An infield double play promptly erased the runner, and no other batter reached base. The second inning brought similar results for the Indians. Power singled, but a double play wiped the basepaths clean.6 Washburn worked the first three innings and faced the minimum nine batters, walking none and striking out one. The Indians’ Siebert wasn’t quite as sharp, giving up five hits in his three innings of work and hitting a batter. But he issued no walks, “showed great poise in pitching himself out of two tight jams,” and held the all-stars scoreless.7

Twenty-five-year-old Bob Veale, a Pittsburgh farmhand pitching for the Columbus (Ohio) Jets, took over from Washburn in spectacular fashion. Veale, still a season away from his major-league debut, worked the fourth inning through the sixth. He yielded no hits or walks and struck out five of the nine batters he faced.

John also worked the middle third of the game, and it was on his watch that the game’s only runs scored. In the fifth inning, Buffalo center fielder Ted Savage led off with a single and stole second base. Right fielder Jim Pendleton of Jersey City hit a bouncer back to the mound that John mishandled for the game’s only error, allowing Savage to take third base. After a strikeout, Pendleton stole second.

Another strikeout gave John hope of escaping the inning unscathed. But second baseman Bob Johnson of Rochester, the International League’s RBI leader, laced a single into center field to score Savage and Pendleton for a 2-0 lead.8 Those were the only two hits John allowed in his three innings of work. He also walked a batter.

Bob Duliba, a St. Louis farmhand, and Surkont continued the IL team’s pitching dominance in the seventh and eighth innings. They allowed only one walk, by Duliba, and struck out two. Weaver pitched the seventh and eighth for the Indians, allowing two hits and no runs. All hits in the game — nine for the IL, two for Cleveland — were singles.9 The popular Easter “drew the biggest ovation of the night” in the eighth, when he pinch-hit for his Rochester teammate Johnson. Easter hit a sinking line drive snagged by Essegian in right.10

Heading into the ninth, Lipon handed the 2-0 lead to righty Orlando Peña. Peña had appeared in 59 games for the Cincinnati Reds between 1958 and 1960 but spent the entire 1961 season in Triple A, pitching in Jersey City and Toronto. He closed out the game in dominant style, allowing no hits, walking one batter, and striking out three.11 The game ended in 2 hours and 14 minutes. Veale took the win and John the loss.

The Indians’ promising season crumbled, as the team posted a 37-53 record the rest of the way and slipped to fifth place. Their slide cost Dykes his job with one game left in the season.12 Veale’s Columbus Jets earned the IL regular-season title with a 92-62 record, while Surkont and Savage’s Buffalo Bisons won the four-team Governor’s Cup postseason playoffs.13

Offensive hero Johnson hit .295 in 61 games with the Washington Senators that season and later played for the 1966 World Series champion Baltimore Orioles, though he did not appear in the Series. Pena’s big-league career lasted until 1975 and Veale’s until 1974.

No one on either team could touch John for longevity, as he went on to pitch 26 seasons in the majors. He won 288 games, made four All-Star teams, led the American League in shutouts three times, and placed in the top five in Cy Young Award voting three times. He also lent his name to a revolutionary arm surgery that has saved or extended the careers of numerous pitchers.

John made his final regular-season big-league appearance as a New York Yankee on May 25, 1989, 27 years and 11 months after the game in Buffalo. The fans at War Memorial Stadium in June 1961 might have been hard put to imagine that Cleveland’s kid pitcher would still be on a major-league mound 28 seasons later.

Neither Baseball-Reference nor Retrosheet provides box scores of exhibition games, but the June 27, 1961, edition of the Rochester (New York) Democrat and Chronicle and the July 5, 1961, issue of The Sporting News published box scores.

6 The IL turned two infield double plays — one 4-6-3, one 6-4-3. It’s not evident from game accounts which one occurred in the first inning and which in the second.

11 Game accounts do not identify the Indians batters in the ninth inning.