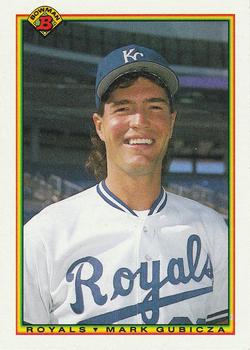 The Oakland A’s ruled the American League from 1988 to 1990, winning 306 regular-season games on their way to three consecutive World Series appearances and the title in 1989.

During the first two years of this run, Oakland’s AL West rival Kansas City had two pitchers who had proved to be a thorn in the side of the A’s. Bret Saberhagen was 5-1 with a 1.99 ERA in six starts. His teammate Mark Gubicza was 3-1 with a 0.28 ERA in 32 innings over four starts.1

Despite the success of their two right-handers against the A’s, the Royals had not challenged Oakland for the division crown the previous two seasons. They had finished third in 1988 – 19½ games behind the A’s – and despite winning 92 games the next season, they finished seven games back in 1989.

Kansas City hoped to wrestle the title away from Oakland in 1990, but a 2-12 stretch beginning on April 20 had dropped them into last place in the division. When the A’s arrived at Royals Stadium on May 31, they won the first two games of the four-game series to increase their lead over the Royals to 13 games.

When Gubicza took the mound for the final game of the series in front of a Sunday afternoon crowd of 40,022, he was just 2-5 with a 5.28 ERA in 10 starts. But he may have felt confident because the calendar had just turned to June – in the previous two Junes Gubicza was 9-1 with a 1.84 ERA and had been named the AL pitcher of the month both times.2

Gubicza’s mound opponent was Oakland ace Dave Stewart – baseball’s winningest pitcher since the start of the 1988 season3 – who was 8-2 in 1990 with a league-leading 1.79 ERA. He had walked just 19 batters in 75⅓ innings.

Eleven months earlier, on July 3, 1989, the duo had battled in Oakland; each hurled eight innings with Gubicza suffering a 1-0 complete-game loss on a third-inning unearned run.

Doug Jennings led off the 1990 rematch with a single to right field, but Gubicza retired the next six A’s, including strikeouts of Jose Canseco and Dave Henderson.

In the third, Walt Weiss bunted off Gubicza’s glove for a hit and scored when Willie Randolph followed with a hit-and-run groundball double to left.4 It was the first earned run Oakland had scored against Gubicza since September 11, 1988 – a span of 38 innings.

Gubicza stranded Randolph at second by striking out Jennings, getting Carney Lansford on a grounder to the shortstop, and fanning Canseco.

Despite his recent success against the A’s and the experience of his previous battle against Stewart, Gubicza chose not to watch Stewart work in this game; he retired to the Royals clubhouse after recording the final out each inning and waited out Stewart’s turns on the mound.5

“Dave Stewart has done so well, I didn’t just want to sit there and watch him,” Gubicza said. “I just sat up here in the clubhouse and waited until I heard the music and the crowd and knew the inning was over, then I went back out to pitch.”6

Had Gubicza been watching from the dugout, he would have seen that Stewart didn’t have his good stuff or his usual control.

Stewart allowed just two runners in the first three innings – walks to Kurt Stillwell and Jim Eisenreich – but the Royals got to him in the bottom of the fourth.

Gerald Perry led off with a walk. He scored when George Brett lined a double to right. After Bo Jackson lined out to second, Eisenreich belted a wind-aided home run to right to put the Royals up 3-1.

Willie Wilson started another rally with a single to right and went to third on Frank White’s two-out single; Kevin Seitzer laced a double to left to bring in Wilson and put Kansas City up 4-1. Stillwell grounded to first to end the inning.

Kansas City stranded two more in the fifth when Jackson singled with two outs and Eisenreich walked. Stewart worked out of that jam, but he wouldn’t get through the sixth inning.

Mike Macfarlane and White drew walks to start the sixth and moved up on Seitzer’s sacrifice. Stillwell ripped a double to left give the Royals a 6-1 lead and knock Stewart from the game.

Joe Klink relieved but allowed an RBI double to Perry. After retiring Brett on a fly to center, Klink walked Jackson and Eisenreich to fill the bases; another walk to Wilson forced in Perry to make the score 8-2. Macfarlane flied to center, leaving the bases loaded.

After Randolph’s hit in the third inning, Gubicza cruised through the Oakland lineup. He retired 15 consecutive batters until Terry Steinbach lined a ball to center to start the top of the eighth. Wilson made a diving attempt7 but the ball got past him for a triple;8 one out later Steinbach scored on Randolph’s grounder to second.

Gubicza had just thrown 83 pitches, but Royals manager John Wathan brought in Royals reliever Jeff Montgomery for the ninth to get him some work.9

Stewart had allowed seven runs on seven hits and six walks and saw his ERA jump from 1.79 to 2.45. The loss was his second in a row, and the third in his last five outings, after a 6-0 start.

“Everything took a vacation today,” he said. “Wild fastball. No breaking ball. No forkball, nothing.”11

“Early on, it’s tough to tell how your day’s going to be,” he added. “I didn’t get real wild until the fourth or fifth. Normally, I come out of it. But I just couldn’t make any adjustments.”12

Stewart refused to blame the stiff wind blowing out to right field, saying, “The wind didn’t have anything to do with it. No excuses. I was just wild. Everything I threw was up.”13

Gubicza finished with two earned runs on four hits. He struck out eight and didn’t allow a walk.

The outing was especially meaningful to him because a shoulder injury ended his 1989 season on September 12.14 “I can’t lie about that,” he said. “All winter I didn’t know what was going to happen. My goal this year was just to be able to pitch, period.”15

“They told me I only threw 83 pitches,” he remarked. “I usually get that many in four or five innings. I had a good slider and my fastball was working and moving well.”16

Regarding his success in June, Gubicza said, “I guess it’s the warm weather. I’ve always felt comfortable in June, my whole career.”17

Despite Gubicza’s success against them in the past, the A’s noticed a different approach from him in this outing.

“He pitched considerably different today,” Steinbach said. “Before, he showed us the hard, hard fastball in and the hard, hard slider away. Today he didn’t have a good sinker down and in, and he used that mostly for show and threw more breaking balls away and fastballs away.”

“You always try to keep an open mind about a pitcher, but he really made some adjustments today. He got me in my first at-bat [a bouncer up the middle] on a changeup, and I said, ‘Hey, where’d that come from?’”18

Stewart finished the season 22-11 while leading the AL with 11 complete games, 4 shutouts, and 267 innings pitched. He finished third in the Cy Young Award voting behind his teammate Bob Welch19 and Boston’s Roger Clemens.

Gubicza’s gem moved the Royals back to where they started the series – 11 games behind Oakland. It was as close as they would get; they lost their next eight games, including three at Oakland.

Kansas City finished the season sixth in the AL West at 75-86 and 27½ games back of the A’s, who won 103 games. Oakland swept the Boston Red Sox in the ACLS before being swept by the Cincinnati Reds in the World Series.

The author attended this game with some college buddies while taking summer classes at the University of Arkansas.

10 This was Canseco’s fourth strikeout of the game. Although he was hitting .326, he was on pace for 198 strikeouts. Susan Fornoff, “Storm Clears the Air with A’s,” Santa Rosa (California) Press Democrat, June 4, 1990: C3. Canseco finished the season hitting .274 with 158 strikeouts.