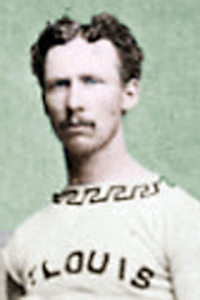 After beginning the 1875 National Association season with victories in their first 26 decisions, the inevitable first loss finally befell the three-time champion Boston Red Stockings in St. Louis on June 5. The 1875 Brown Stockings were the first professional baseball ever fielded in Missouri, and their hard-fought 5-4 comeback victory over Boston was an important early step in establishing big-league baseball as a civic passion in St. Louis.

Manager Harry Wright’s Boston nine headed west at the end of May with a 24-0 record, having beaten seven of the other eight East Coast entrants in the NA at least twice.1 On their way to St. Louis, the Boston team stopped in Cincinnati for an exhibition game. Three members of Boston’s 1875 squad had been played for the undefeated Cincinnati Red Stockings of 1869, George Wright, Andy Leonard, and Cal McVey, and fantasies of another unbeaten season were in the air. To the delight of the locals, Harry Wright, who had played center field for the 1869 Red Stockings, even donned an old Cincinnati uniform and played in a game vs. the Ludlow (Kentucky) team on June 1.2

When the Red Stockings arrived in St. Louis a correspondent wrote, “The Bostons hope to get home with whole skins, but are prepared, if need be, to lose one game in St. Louis and one in Chicago.”3 In the first two games of their visit, they easily dispatched the Browns on June 2 and the St. Louis Reds (or Red Stockings, or Red Sox – a former amateur club that had entered the NA race) a day later. That upped the winning streak to 26 games overall, with wins over nine of 12 NA members. (They had yet to play the Chicago White Stockings, the Westerns of Keokuk, and the Atlantics of Brooklyn.)

Boston’s third game in St. Louis (and second against the Browns) took place on Saturday, June 5, a bright, sunny day. The crowd, estimated at 5,000 or more, overflowed the stands at the Grand Avenue Park, with many spectators standing down the foul lines and around the outfield.

Boston played without its star catcher, Jim White, later in his career known as Deacon, whose thumb had been injured in the previous game. McVey, normally the first baseman, moved behind the plate, and Frank Heifer took over at first. Heifer had signed with Boston just two weeks prior after starring with an independent team, the Actives of Reading. He had made his Red Stockings debut two days earlier in St. Louis.

As the restless crowd waited for the first pitch, an enterprising photographer delayed the proceedings by taking pictures of the players. Finally, St. Louis was sent to bat, and the game got underway.

“Blithesome” veteran leadoff man Ned Cuthbert stepped to the plate, wiped “his hands in the dirt, hitched his pants, gave a tug to his cap, and put himself in ‘posish”’ to face Boston’s star pitcher Al Spalding. Cuthbert placed an “elegant fair-foul” past third base for a safe hit and then stole second base.5

Pearce, the St. Louis captain, followed with a safe hit over second base, putting men on first and third. As Pearce took off to steal second, the batter, Pike, hit a foul ball past first base. Heifer fielded it and tossed to Spalding covering first to put Pearce out before he could get back to the base.6 Pike was then retired on a foul tip to the catcher.

Chapman came to the rescue with a slashing fair-foul to left, bringing Cuthbert home with the first run of the game. Hague ended the inning by grounding out.

St. Louis’s 1-0 lead did not last long. The champions answered with four runs in their first inning. George Wright opened with a groundball that went between shortstop Pearce’s legs for an error. Wright quickly stole second base and advanced to third on Ross Barnes’s single to left field; when St. Louis threw home to keep Wright from scoring, Barnes brazenly took second.

Jim O’Rourke followed with a solid hit to left-center to drive home both baserunners. O’Rourke stole second and came home on a hit past second base by Leonard. Leonard, in turn, stole second base and kept going to third when catcher Miller’s throw skipped into center field. McVey’s long fly to center field was deep enough to allow Leonard to score the fourth run of the inning. Spalding later got a safe hit but was left on base.

With Boston leading 4-1 after the first inning, another easy Red Stockings victory seemed in the offing. But after getting four runs in the first inning, the Reds were held scoreless for the rest of the game. Bradley was “gradually accelerating his speed” and Miller’s catching and throwing were effective after the first frame.7 The fielding highlight was a running, jumping catch by left fielder Cuthbert to rob Barnes of a long hit in the second inning.

St. Louis cut its deficit with one run in the fourth inning. Chapman led off with a sharp hit back to Spalding, who bobbled it for an error. Hague followed with a double to left-center to put men on second and third. Chapman scored after a long fly out by Joe Battin, with the throw from right field getting away from the catcher.

Two more St. Louis runs in the fifth tied the score “amid intense excitement.”8 The first batter, Miller, was spared when McVey missed a foul bound.9 He then sent a “daisy” to left field for a base hit. Cuthbert’s fly to short left fell safely, and the runners moved to second and third when Pearce “sacrificed himself” with a slow groundout.

Center fielder Tom Beals made a brilliant play on Pike’s long fly, but Miller scored and Cuthbert advanced to third after the catch. Cuthbert scored the tying run when Chapman hit safe between third and short. St. Louis nearly took the lead, but “Oleaginous Jack” tried to score on Hague’s hit to right and was cut down at the plate.10

In Boston’s fifth inning, there was a five-minute delay while Barnes searched in vain for his favorite bat, which had been stolen by someone in the crowd. He used another stick and made a base hit but was thrown out stealing on a close play.

The sixth and seventh innings were scoreless. Two Boston men got on in the seventh, but one runner (Beals) was put out at first on a foul ball, and the other (George Wright) was caught trying to steal third after a two-base hit.

The game was still tied as St. Louis batted in the eighth inning. Pearce, leading off, dropped a two-strike fair-foul bunt “just out of reach” of the third baseman to earn a base hit.11 With one out, he advanced on a passed ball. Chapman’s sharp hit to third got away from O’Rourke, giving St. Louis runners on first and third.

Hague’s bouncer to shortstop looked good for a double play, but Chapman collided with second baseman Barnes, causing a low throw to first. Heifer could not come up with the ball, and Pearce – at age 39 the oldest regular player in the NA in 1875 – made it home safely with the go-ahead run.

Boston went out in order in the eighth and ninth, ending with a weak popup by Heifer to the pitcher. When Bradley made the catch for the final out, “Everybody in the crowd made all the noise they possibly could.”12

Bradley was lifted onto the shoulders of delirious fans, who “made a little run with him to home base. They shook him by the hand, and those that couldn’t get a hand shook a leg.”13 The news spread quickly, and downtown was soon in an uproar of celebration.

The losers took the loss “very philosophically. [Harry] Wright said the boys did not expect to go through the season without a defeat, and perhaps St. Louis was as good a place as any for that defeat.”14

On Monday, with an even larger crowd crammed into the Grand Avenue grounds, the Brown Stockings experienced Boston’s full array. Jim White returned to the lineup and went 5-for-5, as the Red Stockings hitters pounded Bradley for 25 hits and won, 15-2.

Boston lost again in Chicago on June 8, then won eight games in row. The Red Stockings won the pennant easily, compiling an overall won-lost record of 71-8. St. Louis finished a respectable fourth at 39-29.

The home team batted first in this game.

4 A note on nicknames: In the game accounts in the three St. Louis newspapers (Globe-Democrat, Republican, and Daily Times), all used both “Browns” and “Brown Stockings” in referring to the home team and each account used both “Reds” and “Red Stockings” for the Boston team.  The Globe Democrat added “Red Legs” to one sentence.  The Boston Globe correspondent used “Brown Sox,” and the Chicago Tribune correspondent added “Brown Legs” to the mix.

6 The rules allowed for a runner to be put out if the fielding team got the ball to the pitcher and then to the base before the runner returned to the bag. This rule was dropped after the 1876 season.

9 A batter was out if his foul ball was caught either on the fly or on the first bounce. This rule remained in effect through the 1882 season in the National League and through 1885 in the American Association.