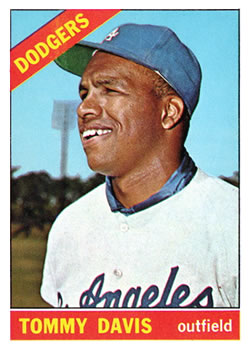 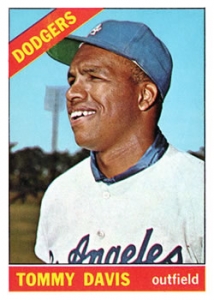 Greatness, thy name is Tommy Davis.

On June 5, 1966, the Los Angeles Dodgers’ left fielder went 5-for-5 in a 16-3 thrashing of the New York Mets at Shea Stadium. But he wasn’t the only LA lad with a stellar performance.

Sandy Koufax, in his last major-league season, struck out nine to earn the win in this first game of a doubleheader. Both natives of Brooklyn, Davis and Koufax caused Dodgers fans to dance and Mets fans to mourn.

Wes Parker had an outstanding game as well with two home runs.

It started as well for the Mets as the schemes of villains and villainesses trying to take over Gotham City in Batman, the year’s breakout TV show.

With two outs in the top of the first inning, Willie Davis got on base when lefty hurler Gerry Arrigo, whom the Reds had sold to the Mets 2½ weeks before for a reported $50,0001 – erred on a groundball. Tommy Davis then got his first hit, a single that moved Willie Davis to third base. Tommy Davis took second on Arrigo’s wild pitch, but Willie Davis held at third; Jim Lefebvre’s strikeout stranded the similarly surnamed runners.

In the top of the fourth, Willie Davis singled and Tommy Davis got his second hit of the game. With runners on first and second, Lefebvre attempted a sacrifice bunt to move the runners, but he fouled out on a popup to catcher Hawk Taylor. Any malaise on the Dodgers bench was short-lived; Al Ferrara hit a three-run homer. It wasn’t expected – Ferrara homered five times in the ’66 season.

Arrigo and the Mets halted the LA lead at 3-0, retiring John Kennedy on a fly out and striking out Dodgers backstop Jeff Torborg.

Koufax led the majors in 1966 with 317 strikeouts, so the June 5 performance, while a likely season highlight for most pitchers, had become standard for the fireballer. Left fielder Ron Swoboda had whiffed in the second inning; Mets shortstop Roy McMillan and Arrigo went down in the third. Swoboda, Taylor, and Billy Murphy struck out in succession in the bottom of the fifth.

In the top of the sixth, Willie Davis added a run to the LA count with a leadoff homer; Tommy Davis singled for his third hit. After Lefebvre sacrificed Tommy Davis to second, Dave Eilers relieved Arrigo.

Left-hander Gordie Richardson relieved Eilers in the top of the seventh and began his tour of the Shea Stadium pitching mound by fielding Torborg’s grounder for the first out. Then the Dodgers furthered their lead into double digits with an offensive barrage the likes of which had not been seen in New York’s environs since the Battle of Long Island.

Koufax doubled and went to third on Maury Wills’s bunt single. For the last six years, Wills had led the NL in stolen bases – major-league leader for three of those years – though his contributions plummeted in 1966. But on this afternoon, he thieved one of his 38 bases for the season. Parker escalated the score to 7-0 with a three-run bash.

Richardson sent the red-hot Willie Davis back to the bench on a grounder to second base for the second out. Tommy Davis followed with his fourth hit – a triple – and scored on Lefebvre’s single. Ferrara continued the pounding with a single that put Lefebvre on third base.

Mets manager Wes Westrum called for another lefty, rookie Bill Hepler. It wasn’t helpful. Lefebvre scored and Ferrara went to third base on Kennedy’s double. Torborg got his second at-bat of the bombardment and drew a walk to set up a potential double-play grounder; Koufax did not oblige the hopes of the home team. His single scored Ferrara and Kennedy; Torborg sped to third base.

Finally, Wills’s grounder to shortstop McMillan forced out Koufax at second base, ending the misery with an 11-0 lead.

LA skipper Walter Alston made a couple of defensive moves in the bottom of the seventh; Parker took over center field duties from Willie Davis and veteran infielder Jim Gilliam replaced Parker at first base. Like Koufax, Gilliam ended his playing career in 1966.

The Mets responded to the drubbing with two runs in the bottom of the seventh.

Wills’s error let Ron Hunt get to first base. He remained there on Ken Boyer’s fly out to Tommy Davis in left field. But not for long. Dick Stuart’s single advanced him to second; Swoboda’s walk loaded the bases.

Koufax struck out Taylor for his seventh whiff, then gave up a two-run single to Billy Murphy, scoring Hunt and Stuart. Murphy batted .230 in 1966, his only major-league season. Both runs were labeled unearned because Hunt had been on base by an error.

Westrum called the bullpen for righty Jack Hamilton to begin the top of the eighth; Los Angeles padded its lead with four additional runs. Parker led off with a grounder to Mets first sacker Stuart with Hamilton covering the base on the play. Stuart’s error in the next at-bat gave Gilliam the base. Then Davis knocked his fifth hit of the game – a single that sent Gilliam to third.

Davis left the game for pinch-runner Derrell Griffith, having earned ovations and awe from the Shea Stadium crowd. Griffith trekked to second base on Hamilton’s wild pitch; Gilliam stayed at third, then scored on Lefebvre’s sacrifice fly to Swoboda in left field.

New York got another run in the bottom of the eighth when Hunt smacked an inside-the-park home run; it was one of three times he homered in 132 games that season. Koufax ended the inning with a strikeout of Boyer looking.

Parker’s solo homer in the top of the ninth gave the Dodgers their 16th entry in the tally and notched the fourth RBI of the game for the LA stalwart. “That second homer was tough to hit because the pitch was high and inside, but I knew I had a chance to tie the mark when I came to bat,” Parker said.2

This two-homer feat had a distinction beyond being a display of power, finesse, and ability – the switch-hitting Parker was the seventh NL player to hit home runs from both sides of the plate in a game. The Dodgers’ legacy of prominence reached into this category. Parker was the fourth member of the storied team to accomplish the feat, along with Jim Russell in 1950; Maury Wills in 1962; and Jim Lefebvre a month before the Mets game.3

Parker hit another home run in the second game of the doubleheader.

In the bottom of the ninth, Swoboda struck out for his third time in the game. The second-year outfielder had an average 0.19 strikeouts to plate appearances.4 The following season, Davis joined Swoboda for a one-year tour in a Mets uniform. He batted .302 in 154 games. The Mets fared not as well with a 61-101 record.

Davis’s 5-for-5 output was especially gratifying for the Dodgers because an injury sustained in a May 1, 1965, game had sidelined him for the rest of the season. Davis had dislocated an ankle attempting to break up a double play; Lou Johnson replaced him in the lineup.

3 Finch. Finch’s article says it was the third time for a Dodger, but he may have meant the Los Angeles incarnation. Jim Russell hit two homers for the Brooklyn Dodgers in a 1950 game against the Cardinals. It ought to be noted that Russell also did it against the Cardinals in 1948 when he played for the Boston Braves. “Home Run From Both Sides of the Plate in One Game,” https://www.baseball-almanac.com/feats/feats20.shtml.