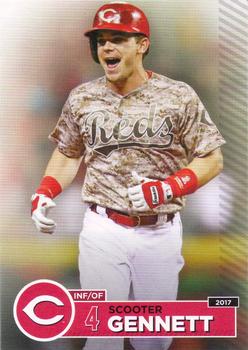 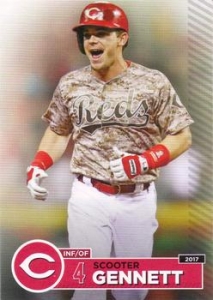 The Cincinnati Reds signed Ryan Joseph “Scooter” Gennett late in 2017 spring training after the Milwaukee Brewers released him on March 28, five days before Opening Day. Gennett was Milwaukee’s regular second baseman for three years, but the team felt that he didn’t fit into their future any longer. After joining the Reds, the 27-year-old Gennett was used in a utility role, playing primarily second base but also as third, both outfield corners, and designated hitter. He was not known as a home-run hitter so far in his professional career, having hit just 35 round-trippers as a Brewer.

The Reds were playing out an early June homestand with a four-game weekday series against St. Louis. The Cardinals were a half-game ahead of the Reds in the National League Central Division and both teams needed to win to keep pace with the division-leading Chicago Cubs. Cincinnati won the first game of the series, 4-2, on June 5, handing the Cardinals their fourth straight loss. Gennett had a double in that game. It was his first hit in seven games, a slump that had seen his batting average drop 39 points to .270.

Reds manager Bryan Price hadn’t originally planned to start Gennett in the series’ second game on Tuesday night. He was also planning to give regular left fielder Adam Duvall the day off. But rain prevented the Reds from taking batting practice, and Price decided to scratch Scott Schebler, Duvall’s expected replacement, from the lineup; Schebler had injured his shoulder the previous Saturday and not played since then. Gennett instead started in left.

Right-hander Tim Adleman took the mound for the Reds. Adleman, in his second year in the majors, entered the game with a 3-2 record. His last win had come on May 26, an eight-inning, one-hit performance against the Phillies. Although he didn’t earn a win in his most recent start, against the Blue Jays on May 31, he had pitched six innings before leaving with the game tied.

Adleman gave up singles in each of the first two innings, but the Cardinals could not take advantage of their baserunners to score. He struck out the side in the third and continued to keep the Cardinals in check through the sixth, allowing just one more baserunner, Tommy Pham, on a walk in the fifth.

Cardinals starter Adam Wainwright entered the game with a 6-3 record. The 35-year-old right-hander, now in his 12th season with St. Louis, had been pitching well. He had allowed just one run over his last four starts (26⅓ innings).

Gennett’s start to the night did not immediately reveal what was to come. After the Reds’ Billy Hamilton led off the first inning with a single and moved to second on a groundout, Gennett’s single drove him in.

Wainwright got through the second unscathed, but the Reds pounced on him for four runs in the fourth. Zack Cozart walked with one out and Joey Votto followed with a single. Eugenio Suarez then hit a fly ball that appeared to be caught in foul territory by Stephen Piscotty. Cozart tagged up and scored an apparent run, but Cardinals manager Mike Matheny challenged the call, claiming — in an unusual appeal — that his player had not made the catch. The umpires changed the call and sent Cozart back to third.

Matheny said later that he wanted Wainwright to get “an opportunity to strike somebody out or get a double play. It was a two-run game, and we’re down. If we’re up, probably let that roll.”1 Suarez ended up getting a pass, loading the bases.

This brought up Gennett. With the count 3-and-2, he drove the next pitch into the left-field seats and suddenly the Reds were up 5-0. It was Gennett’s first-ever home run off Wainwright.

One inning later, Wainwright got the first two outs but then struggled. Hamilton singled and Cozart doubled. The Cardinals then ordered Wainwright to walk Votto intentionally to load the bases, but Suarez tripled for an 8-0 lead.

John Gant replaced Wainwright on the mound, but that didn’t stop Gennett. He hit his second homer, a two-run blast over the center-field wall. The Reds’ lead was now 10 runs. Later, Wainwright said of Gennett “He almost beat us by himself.”2

Gant managed to get through the fifth without any more scoring. But when he faced Gennett in the sixth, the left fielder struck again, hitting a 3-and-1 pitch over the wall in left field for his third home run of the game and an 11-0 Cincinnati advantage.

Adleman continued to shut down the Cardinals until the seventh, when Piscotty hit a solo home run down the left-field line. But he recovered and finished the inning before being replaced by a pinch-hitter in the seventh. He ended up striking out seven while giving up just three hits.

The Reds were scoreless in the bottom of the seventh. With Gennett due up fourth in the eighth, Cincinnati would need someone to get on base to give Gennett his chance at history. Arismendy Alcantara, who had replaced Cozart earlier in the game, grounded out to start the eighth against the third Cardinals pitcher, right-hander John Brebbia.

Schebler, whose scratching from the lineup allowed to Gennett to start, came to bat. Schebler had replaced Votto in the seventh. He worked a walk. “I didn’t even think about it, because I didn’t know exactly where he was in the order,” Schebler said later.3 Then Suarez struck out, giving Gennett a chance to make history.

After watching Brebbia’s first pitch for a strike, Gennett swung and missed on the second one. On Brebbia’s third pitch, a fastball, Gennett swung and didn’t miss. The ball sailed over the right-field wall. Brebbia said later, “Just by the noise of the barrel, I thought what that sounds like — sounds like I’m not going to use that ball again.”4 Gennett joined Mark Whiten as the only two players to hit four home runs and drive in at least runs in a game. Whiten did it against the Reds on September 7, 1993.

Gennett shared his excitement with reporters after the game, saying, “It’s pretty cool. It’s something that I never thought I’d do. Even three home runs is crazy. I made a few adjustments trying to relax and swing at better pitches.”5

Adleman, who raised his record to 4-2, said afterward, “It’s always nice to have Scooter Gennett on your team. It’s funny. A buddy just texted me and said Scooter just hit more home runs than he had in his entire minor-league career.”6

Gennett, a Cincinnati native, acknowledged his own surprise at his accomplishment: “For a guy like me to do that is crazy — a little short of a miracle. It’s surreal. I’m truly blessed. Being from here and watching the Reds play when I was little — I can’t put it into words.”7 He was also the first Reds player to accomplish the feat, something that other Cincinnati sluggers from Ted Kluszewski to Frank Robinson to Johnny Bench to Ken Griffey Jr. had not done.

After the game, Gennett was bombarded with questions from the media. One of them concerned his nickname. Gennett said he took the nickname as a 5-year-old fan of the Muppets character Scooter. He used it as a permanent alias after his mother tried to impart a lesson about buckling his seat belt with a trip to a police station for a lecture. “I thought I was going to be arrested,” he said. “So, I told the policeman my name was Scooter. After we left there, I didn’t answer to Ryan because I thought if I answered to my real name I’d get arrested.”8 Gennett was now in the record books; he no longer needed to worry about an alias.

In addition to the sources cited in the Notes, I also used the Baseball-Reference.com and Retrosheet.org websites for box score, player, team, and season pages, pitching and batting logs, and other pertinent material.