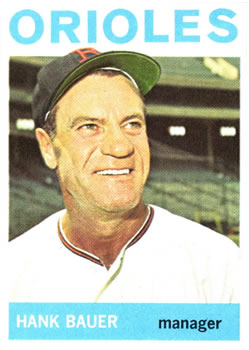 The 1964 Aberdeen (South Dakota) Pheasants dominated the Class A Northern League, compiling an 80-37 record and finishing the year 12 games ahead of their closest competition. For all that success, though, the most memorable game of the 1964 campaign for the Pheasants and their fans was probably a game the team lost.

On June 8 the parent Baltimore Orioles took an offday during a Midwestern road trip and came to town for an exhibition against Aberdeen’s “Baby Birds.”1 Although barnstorming teams of major-league all-stars had played in the state before, the Orioles’ visit was reportedly the first time an entire major-league baseball team had come to South Dakota.2 The teams had a close and longstanding relationship. Aberdeen had signed an affiliation agreement with the St. Louis Browns upon joining the Northern League in 1946 and had kept that link ever since, even after the Browns moved to Baltimore in 1954.3

Exhibitions are by their nature noncompetitive — in part because they don’t count, and in part because no one wants to see an injury. The June 8 game sparked a little competitive talk, though, because it brought together two red-hot teams. Manager Hank Bauer’s Orioles were 31-17, just a half-game behind the league-leading Chicago White Sox. The Pheasants, managed by a 28-year-old baseball lifer named Cal Ripken Sr., came into the game with a 31-9 record.4 The Associated Press quoted unnamed Aberdeen players as saying: “We’re gonna beat ’em and climb into that big plane. They can stay and finish the Northern League schedule.”5

The Pheasants were known to be stocked with promising prospects, and eight of their players eventually made the major leagues. They included future Baltimore stalwarts Mark Belanger and Jim Palmer, as well as Lou Piniella, who appeared in four games for the 1964 Orioles but whose American League Rookie of the Year season was still five years away. Future big leaguers who played that day for Aberdeen included Belanger, leading off and playing shortstop; Mike Fiore, hitting third and playing first base; and starting pitcher Eddie Watt. Another future big leaguer, pitcher Mike Davison, appeared in relief for the Pheasants.6

Bauer, meanwhile, followed the classic exhibition-game approach of giving his starting players an at-bat or two and then rotating them out of the game. Aberdeen fans got to see many of Baltimore’s key players, including Brooks Robinson, Luis Aparicio, Boog Powell, Jackie Brandt, Norm Siebern, Jerry Adair, and starting pitcher Milt Pappas. The game was touted as a homecoming for former Pheasants Steve Barber and Wes Stock, who appeared with the team in 1958 and 1956 respectively. Barber appeared in relief, but Stock did not pitch.7 A well-known retired big leaguer also got a chance to play. Bauer tapped 39-year-old bullpen coach Sherm Lollar to start at catcher, to ease the burden on catchers Dick Brown and John Orsino. Orsino was nursing a minor injury.8

For a while it looked as if weather might interfere with Aberdeen’s big day. Flooding, dust storms, hail, and wind caused problems in different areas of South Dakota that day, and rain showers fell in Aberdeen just before the game. The rain cleared out in time, though, and the game was played in good conditions.9 A sellout and record crowd of 5,130 turned out to Aberdeen’s Municipal Park, with additional spectators watching the game from treetops, parked cars, and other places outside the ballpark.10 A local sportswriter subsequently estimated the crowd at 6,300 and suggested that it was the largest turnout ever for a baseball game in South Dakota.11

When the game started, Baltimore wasted no time reminding everyone on hand who the major-league team was. Second baseman Adair doubled down the right-field line on Watt’s second pitch, and first baseman Siebern drove him in with a single for a 1-0 Baltimore lead. The Orioles scored three more runs in the second inning on a two-run double by right fielder Sam Bowens and a misplay by Watt on a grounder back to the mound. Watt’s boot was one of four errors made by the Pheasants that night, with the usually sure-handed Belanger accounting for one of the others.12

Watt walked three batters in the second inning, and one of the walks led to an injury — though it came to a player whose loss didn’t really affect his team’s fortunes. Lollar, who drew one of the walks, later injured his left knee trying to score on a wild pitch and had to leave the game. Bauer gave a battlefield promotion to Aberdeen backup catcher Bill Morton, who became the Orioles’ backstop for the rest of the game.13

The Orioles plated one run apiece in the third and fourth innings, both unearned. In the third, Baltimore’s Bob Johnson reached second on an error by Aberdeen third baseman Nellie Cochran, and Powell singled him in. The same thing happened in the fourth, except Baltimore’s Gino Cimoli was the batter, Aberdeen right fielder Dick Johnson committed the two-base error, and Siebern singled in the run. Through 3½ innings, Baltimore had taken a resounding 6-0 lead.14

Meanwhile, the Pheasants were struggling just to reach base. Starter Pappas threw two hitless innings with four strikeouts. Barber followed with two shutout innings, allowing singles to Fiore and catcher George Farson. The Pheasants mounted their biggest offensive outburst of the night in the sixth inning against Baltimore’s third reliever, Chuck Estrada. Estrada surrendered a pinch-hit single to Aberdeen’s Bob Lewandowski and a walk to second baseman Bob Litchfield. Center fielder Johnny Scruggs, who hit 22 homers that year for Aberdeen, followed with a 390-foot shot to left-center field to make the score 6-3 and thrill the home fans.15

As it turned out, the game ended 6-3. Baltimore’s bats went quiet, as the team collected all of its hits in the first five innings.16 Scruggs gave the Aberdeen fans one last thrill in the eighth inning, batting against Steve Cosgrove, a pitcher brought in from Earl Weaver’s Double-A Elmira (New York) Pioneers to eat a few innings for Baltimore. With two runners aboard on walks, Scruggs hit a line drive to center field, but wind knocked it down and Orioles center fielder Willie Kirkland gathered it in.17 The seventh and eighth innings also served as a showcase for Aberdeen pitcher Davison, an 18-year-old left-hander having a superb rookie year. Davison threw two hitless innings, walking two and striking out six.18

By the estimation of the big-city Baltimore Sun, the 2-hour 15-minute game was a success. The Pheasants played competitively and did not embarrass themselves, and the parent Orioles won the game without showing up their farm team. The Pheasants did not “beat ’em and climb into that big plane” — but as it turned out, the O’s didn’t climb directly into their big plane, either. They had planned to fly directly to Chicago after the game, but tornado warnings across the Midwest forced the team to reschedule its departure for the following morning and stay in South Dakota overnight.19

The Pheasants, as mentioned, went on to win the Northern League title by a wide margin. The Orioles went 97-65 with one tie and closed the year in third place, two games behind the Yankees and one behind the White Sox. The Orioles never returned to Aberdeen for another exhibition, but the O’s retained their affiliation with the minor-league club. When the Northern League folded in January 1972, Baltimore had already renewed its link to Aberdeen for that season. At the time, it was the longest such agreement in baseball.20

Neither Baseball-Reference nor Retrosheet provides box scores of exhibition games, but the Baltimore Sun printed a box score in its edition of June 9, 1964.

6 1964 Pheasants who reached the big leagues but did not play on June 8 included Piniella, Palmer, Dave Leonhard, and Tom Fisher.

13 Hatter. Morton never played in a regular-season big-league game. His career topped out with four games at the Triple-A level in 1962 with Atlanta, then a farm club of the St. Louis Cardinals.