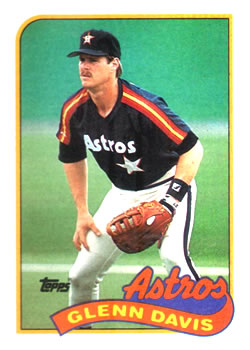 After sweeping a six-game road trip at Pittsburgh and St. Louis, the Houston Astros returned to the Astrodome on June 1, 1989, for an 11-game homestand that was full of drama and featured four walk-off wins in a six-game span.

They took the first two of a four-game series against Los Angeles – the second one a 1-0 win against Fernando Valenzuela – and then things really got interesting. On June 3 they outlasted the Dodgers in a 22-inning marathon on Rafael Ramirez’s two-out single. The next night Mike Scott – making an emergency relief appearance as Houston’s sixth pitcher of the game1 – lofted a sacrifice fly in the 13th inning to beat the Dodgers, 7-6, and give himself the win.

San Diego’s 10-2 win on June 5 ended the Astros’ 10-game winning streak. But on June 6 the Astros staged a wild comeback for another walk-off win. Houston trailed 7-4 and was down to its final out against the Padres with no one on base. Four free passes by Padres pitchers, a wild pitch on a strikeout, and a throwing error by Padres catcher Benito Santiago gave the Astros three runs and the tie in the bottom of the ninth, and Houston won in the bottom of the 10th on a single by Glenn Davis against San Diego’s ace reliever Mark Davis.

After a 3-2 win over the Padres on June 7 tied the Astros with the San Francisco Giants for the lead in the NL West, it was “déjà vu all over again” – as Yogi Berra, Houston’s bench coach in 1989, once said. On June 8 Houston scored four runs in the bottom of the ninth to tie, then won the game in the 10th when Mark Davis surrendered another walk-off hit to Glenn Davis – this time a dramatic two-run homer.

The Astros entered the June 8 game with 12 wins in their last 13 games. During this hot streak they had climbed from fifth place in the National League West into a tie for first with a record of 33-25. San Diego was in fourth, four games back, with a mark of 30-30.

Despite their team’s recent success and first-place position, only 13,518 fans showed up for the Thursday night matchup. Houston’s starting pitcher was 14-year veteran Bob Knepper, who was 3-6 with a 4.86 ERA in 12 starts. His opponent was nine-year veteran Eric Show, who had a 6-6 record with a 4.40 ERA in 12 starts. A victory in this game would give Show 93 career wins with the Padres – breaking a tie with left-hander Randy Jones for the most in franchise history.

The Padres took a 3-0 lead in the third. Gary Green led off with a soft infield single to third and was safe at second when Show dropped a bunt and reached on a fielder’s choice. Luis Salazar also bunted. Knepper fielded the ball cleanly, but his throwing error allowed Green to score, Show to take third, and Salazar to advance to second. Roberto Alomar launched a deep sacrifice fly to left to plate Show.

Two-time defending National League batting champion Tony Gwynn entered the game red hot – he had a nine-game hitting streak in which batted .545 (18-for-33). He rapped out an infield single to first to put runners on the corners; Jack Clark drove in the third run with a groundball single to right field.

The Astros got one of the runs back in the bottom of the inning when Gerald Young doubled with two outs and scored on Doran’s single to left.

Salazar reached on a throwing error by shortstop Ramirez to start the fifth and went to third on Alomar’s double. Gwynn followed with a single to increase San Diego’s lead to 5-1. Knepper and reliever Mark Portugal held the Padres to just two walks over the next four innings.

After a leadoff double by Knepper and a one-out walk to Young in the fifth, Show set down 10 straight Astros and cruised into the bottom of the ninth with a 5-1 lead.

With Show three outs away from his first complete game of the season, the Astros began their rally. Davis and Puhl led off with singles to center. Ken Caminiti grounded out to Show but Ramirez followed with an RBI single.

Mark Davis relieved Show with runners at the corners. Craig Biggio greeted Davis with a groundball double into left field to make the score 5-3.

Pinch-hitter Alex Trevino came to the plate. Davis uncorked a wild pitch to score Ramirez and move Biggio, the tying run, to third. Trevino then hit a fly ball to Chris James in right field to score Biggio and tie the game.

In the 10th, Houston turned to veteran right-hander Danny Darwin. He allowed a leadoff single to Alomar, who stole second. Gwynn’s third single of the game drove in Alomar and put the Padres back up, 6-5. The hit was Gwynn’s major-league-leading 85th and raised his batting average to .353.

But the Astros had one more rally left. Mark Davis walked Young to start the bottom of the frame. One out later, Glenn Davis hammered a drive to deep left to complete another remarkable Astros comeback, giving them a 7-6 win.

The narrow margin of victory was nothing new for Houston. In just 59 games, it was their 28th one-run game. They had won 18 of them, including seven walk-off wins. They finished the season with a record of 35-24 in one-run games.

After the game, the Astros marveled at their recent streak.

“We’re winning right now. We’re on a roll,” remarked Glenn Davis. “If we were in Vegas they would kick us out of the house. A lot of funny thing have been happening. We’ve been getting a lot of breaks, but I’m not complaining.”2

“I’ve never experienced a week like this,” said Doran. “It’s amazing the way these games have gone. I can’t believe it. Somebody’s gonna have a mental breakdown.”3

Houston manager Art Howe mused, “We feel like that if we can get anyone on base late, we can win. We try to outdo ourselves. This time I feel like we did.”4

Gwynn was frustrated with the Padres’ recent woes. “You hate to put the blame on anyone,” he remarked after the game. “But when you sit down and look at what happened in this series, we did our job as hitters, we did our job as defensive players, the starters did their job, but the bullpen didn’t come through. It’s obvious.”5

Gwynn added, “We should be 5-2 instead of 1-6 on this road trip. Houston just believes they can win the game. When you get caught up in a streak like theirs, you believe.”6

After racking up two wins and 17 saves in his first 21 appearances, Mark Davis had his first two blown saves of the season – in back-to-back appearances, by allowing the game-winning hit to Glenn Davis each time.

Glenn Davis spoke of his recent success against San Diego’s closer, saying, “He’s been struggling. We caught him with his confidence and velocity down a little. He didn’t want to throw me a strike and he got it right over. It was a curve ball and I don’t think he wanted it up where I could hit it.”7

Mark Davis agreed, “I’m struggling to throw strikes. I haven’t given us a chance to win because of being wild.”

The struggles for the Padres and their closer continued through the end of the road trip – they were swept at San Francisco to end the trip with a record of 1-9. The last loss came when Davis entered a 1-1 game in the 12th and – after retiring the first two batters – allowed a single to Robby Thompson and a game-winning home run to Will Clark.

From there, San Diego turned its season around. The Padres went 59-39 the rest of the way, finishing second in the NL West, three games behind San Francisco. During this stretch, Davis appeared in 45 games with two wins, 27 saves, and just two blown saves. He finished the season with a league-leading 44 saves and a 1.85 ERA and was voted the National League Cy Young Award winner.

Houston finished off the homestand with a three-game sweep of the Braves – which included a four-run rally in the sixth inning to win 6-5, followed by a 1-0 win over 22-year-old John Smoltz. The Astros hovered within striking distance of the top of the division for most of the summer – they were just one game out of first as late as August 8 – but began to fade in late August. They went 15-14 to finish the season and ended up in third place, six games out of first.

While spending the summer working for his uncle in Westlake, Louisiana, the author attended this game with his cousin and a couple of college buddies who made the trip down from Arkansas. Before the game they took a picture with Houston coach Phil Garner near the Astros dugout. 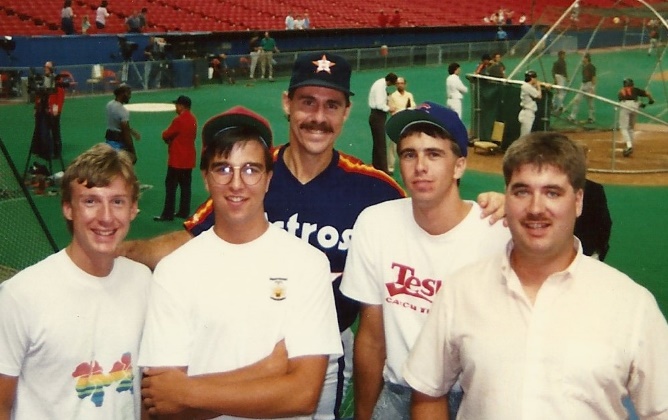 In addition to using the sources cited in the Notes, the author consulted data from Baseball-Reference and Retrosheet:

1 Scott started 32 games this season. This was his only relief appearance.