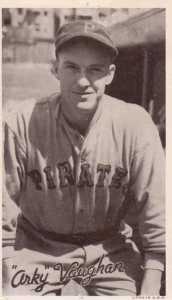 The Pittsburgh Pirates hit two grand slams and beat the Philadelphia Phillies 10-0 on May 1, 1933. The Pirates had five future Hall of Famers in their lineup (Freddie Lindstrom, Pie Traynor, Arky Vaughan, Lloyd Waner, and Paul Waner), and all five had at least one hit in the shutout win.

It was “a fine day with a partly sunny sky and an afternoon high temperature close to 80 degrees” at Philadelphia’s Baker Bowl.1 Early arriving fans for the Monday afternoon contest first saw an old-timer’s game to celebrate the 50th anniversary of Philadelphia’s first National League game.2 Members of former Phillies teams beat the 1933 Phillies 10-1 in the pregame exhibition, although it was obvious that the active major leaguers “gracefully recognized how lacking their opponents were in the way of practice after being out of the game for so many years.”3 The old-timers included future Hall of Famers who played for the Phillies, like Chief Bender and Johnny Evers, as well as nineteenth-century players like Ed Andrews, Al Maul, and former left-handed catcher Jack Clements.

The crowd got an unexpected treat when first-year Pirates coach Honus Wagner stepped up as a pinch-hitter in the old-timer’s game and grounded out, 16 years after his legendary playing career ended.

“The old timers paraded Philadelphia earlier in the afternoon. At the ball grounds they were driven around the field headed by a band and followed by uniformed semi-pro teams. All the old timers were introduced for talking pictures and the movie cameras were busy for half an hour filming the proceedings,” the Pittsburgh Post-Gazette described. “The fans, some of whom had not seen a real contest since long ago, cheered their favorites lustily.”4

Following the nostalgic lid-lifter, the current-day Phillies took on their cross-state rivals. The Pirates came in with a 10-3 record, the best mark in the major leagues, and had won their last three games. The Phillies were 5-10, the worst record in the National League, and came in losers of five in a row.

Phil Collins was the starting pitcher for Philadelphia. “Fidgety Phil,” who got his nickname from his jittery movements on the mound, was primarily a reliever that season for the Phillies. He started 13 games, relieved in 29 others, and led the NL in saves with six.5 Bill Swift got the start for Pittsburgh. Swift was a dependable 24-year-old who went 14-10 with a 3.13 ERA for the ’33 Pirates.

Neither side scored in the first two innings. When the first two Pirates in the top of the third grounded out, another scoreless frame looked likely. But the next four Pittsburgh batters reached and scored. Paul Waner started the rally with a shot off the right-field wall. Philadelphia’s Chuck Klein played the ball smoothly and held Waner to a single.6 Off-the-wall singles to right field were fairly common at Baker Bowl, where the right-field foul pole was only 281 feet from home plate and the fence was 60 feet high.7

Waner advanced to third on Traynor’s single that glanced off second baseman Neal Finn’s glove. Gus Suhr walked “to clog the cushions.”8 Vaughan stepped in with the bases loaded and hit a deep fly ball that took an abnormal bounce and helped Pittsburgh in a big way.

“Vaughan’s long high fly fell on top of the score board back of right center, took a lofty bound and led (Chick) Fullis and (Hal) Lee (on) a lively chase. The fleet Arky raced all the way around the circuit and cleaned the bases,” the Pittsburgh Post-Gazette reported.9 Vaughan was indeed fleet — he led the major leagues in triples that year.

Neither side scored until the top of the seventh, which was when the Pirates hit their second grand slam of the afternoon. Paul Waner led off with a single to right field and scampered to third when Traynor followed with a double to left field. Suhr walked again to “clog the cushions” again. Suhr’s walks contributing to two rallies was no surprise — he led the Pirates in walks that season.

The next two batters grounded into force outs at home, but the bases remained loaded for Earl Grace with two outs. Grace cranked a grand slam over the right-field fence to give Pittsburgh an 8-0 lead. Three more singles and a Phillies error led to another Pittsburgh run and a 9-0 Pirates lead.

The left fielder Lee had to leave the game in the seventh inning after injuring his leg trying to catch Traynor’s double.10 Fred Brickell replaced him.

Swift scored Pittsburgh’s final run of the game in the ninth, when Traynor’s groundout drove him in from third. He then set down the Phillies in order in the bottom of the ninth to seal the 10-0 victory.

Swift scattered nine hits in his complete game. It was one of his two shutouts in 1933, one of 16 by the Pirates, and was the first of nine times the Phillies were shut out in 1933. Swift struck out one and walked two. The Associated Press’s game story in the Wilmington (Delaware) Morning News was subheadlined “Bill Swift Twirls Brilliant Baseball.”11

But Vaughan’s and Grace’s grand slams received the biggest headlines. The Pittsburgh Sun-Telegraph wrote the day after the game, “There’s no denying that it’s a most unusual batting feat when two members of one club make home runs with the bases full in the same game. And the cleanup wallops of Floyd (Arky) Vaughan and Earl Grace in Philadelphia yesterday were all the more pleasing to Pittsburgh fans because neither of those players had been hitting a lick and this may mean the end of both slumps.”12

It was the second time the Pirates hit two grand slams in one game. The first was on June 22, 1925, when George Grantham and Traynor did it for that year’s World Series champions in a 24-6 win over the St. Louis Cardinals at Sportsman’s Park. It’s happened twice since, with Richie Hebner and Bill Madlock both hitting grand slams for the Bucs at Three Rivers Stadium on September 14, 1982, in a 15-5 win over the Chicago Cubs, and again on April 16, 1996, when Jay Bell and Orlando Merced did it at Busch Stadium in the Pirates’ 13-3 win over the Cardinals. As of March 2021, no NL team has ever hit three grand slams in a game.13

The Pirates piled up 17 hits in the win. Paul Waner went 3-for-6 with three singles, Traynor was 3-for-6 with a double and an RBI, Grace was 3-for-5 with a home run and four RBIs, and Swift was 3-for-5 with a double batting in the ninth spot in the order. Swift was an outstanding hitter by pitcher standards. He hit .227 in 591 career at-bats and had 33 extra-base hits, including three home runs. Swift’s home run on June 11, 1938, came against Cincinnati Reds pitcher Bucky Walters, who the next season led the NL in wins, ERA, and strikeouts, and won league MVP.

The game took 2 hours and 18 minutes to complete and the attendance was 12,000. Dolly Stark was the home-plate umpire. Stark wintered as a basketball coach at Dartmouth College and a women’s clothing designer. His signature item was the “Dolly Stark Dress.”14 Hall of Famer Bill Klem was the base umpire. As of March 2021, Klem still held the record for most major league games umpired (5,375).

The Pirates went on to finish with an 87-67 record, in second place, five games behind the pennant-winning New York Giants. The Phillies finished 60-92, in seventh place, 31 games behind the Giants. The 1933 season proved to be the last one in Philadelphia for Phillies manager Burt Shotton. He went on to manage the Reds and Brooklyn Dodgers after his stint with the Phillies. George Gibson continued managing the Pirates in 1934 until he was replaced by Traynor at midseason.

5 Saves were not an official statistic in 1933 and are computed retrospectively.