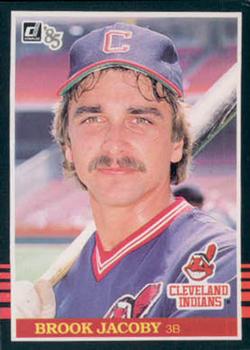 The Cleveland Indians’ 1985 season featured a cavalcade of wild and wacky moments.

The Indians opened the campaign with five straight losses, were forced to take early-morning fielding practice a week into the season,1 literally lost their best hitter for a game in New York,2 saw their ace put up an “obscene gesture” toward Baltimore’s fans,3 and got into a brawl with the Kansas City Royals.4

And that was just in April.

When the calendar flipped to May, the Indians envisioned turning the page on the sordid start — but then came the wildest and wackiest game yet.

Cleveland made four errors and stranded a team-record 18 runners on base5 but still managed to eke out a 6-5 victory at Royals Stadium in Kansas City on May 1, 1985 — a showing in front of 16,699 fans that Indians skipper Pat Corrales said was “definitely a game for the bloopers.”6

The final game of a three-game series started innocently enough against blossoming 22-year-old Royals starter Mark Gubicza when Brett Butler reached on an infield single and Julio Franco flied out to right — that would be the last ball the Indians hit out of the infield until the third inning.

Butler stole second and Mel Hall walked to put two runners on for Cleveland’s cleanup man, Andre Thornton, who was appearing in his fifth game of the season after recovering from a knee injury. He struck out for the seventh time of his young season, but Butler was able to swipe third on the pitch. George Vukovich rolled a routine grounder to Royals second baseman Frank White, who had six Gold Gloves to his credit, but White hesitated on the throw to first, allowing Vukovich to reach safely with a single and Butler to score instead of recording the third out. White redeemed himself by fielding Mike Hargrove’s grounder to close out the inning.

Kansas City evened the score off Don Schulze in the bottom of the frame, when Pat Sheridan singled, stole second, and crossed the plate on George Brett’s single.

In the second inning, eight Cleveland batters came to the plate. None of them put the ball into the outfield. But the Indians scored twice.

Brook Jacoby reached on an infield single and Chris Bando walked to open the inning. Tony Bernazard grounded into what should have been a double play, but shortstop Buddy Biancalana’s throw to White was off the mark, leaving the bases loaded. Jacoby scored and Bando went to third when Butler hit into a fielder’s choice, Butler moved to second on a wild pitch, and Franco reached when catcher Jim Sundberg dropped a third strike to load the bases again.

Hall rolled into what also should have been a double play, but White committed an error on the play that allowed Bando to score. Gubicza got out of the inning without any further damage after White caught a popup and cleanly fielded a grounder.

There was little action until Brett led off the Royals’ half of the fourth with a double, moved to second on Jorge Orta’s grounder, and scored when Steve Balboni reached on Jacoby’s error at third.

Cleveland got a run back in fifth. Hargrove walked to open the inning and was forced out at second on Jacoby’s grounder. Jacoby stole second and scored on Butler’s two-out single for a 4-2 lead. In the sixth, Hall and Vukovich hit singles on either side of a Thornton fly out to chase Gubicza from the game. Reliever Mike Jones allowed an RBI single to pinch-hitter Pat Tabler, walked Jacoby, and let another run score on Bando’s sacrifice fly to center.

With the 6-2 lead, it seemed Schulze and the Indians were going to cruise to victory and snap their three-game losing skid with ease, but the Royals saw their chance to run their winning streak to five games in jeopardy and found a rally in the bottom of the seventh.

Schulze walked White to open the inning and was lifted for reliever Rich Thompson in a surprising — but common — move by manager Corrales.

“Schulze said he felt fine, but it looked to me like he was running out of gas,” Corrales said. “He threw well in the sixth inning, but not when he walked that guy in the seventh.”7

Thompson followed his game plan perfectly, but in this game, even that couldn’t stop something unusual from happening.

“I told Thompson to get groundballs,” Corrales said, “and that’s exactly what he did.”8

Those groundballs happened to be consecutive shots back to the mound, but Thompson made errors on both plays.9 That allowed White to score and left runners on the corners with no outs.

“One should have been a double play,” Corrales said, “and the other … he had no chance.”10

Thompson walked pinch-hitter Dane Iorg to load the bases and gave way to Dave Von Ohlen, who added to the wacky and weird theme by pitching the next 1⅓ innings without having an official at-bat recorded against him.11

Willie Wilson flied out to right to bring home Darryl Motley, cutting the deficit to 6-4, and Von Ohlen got out of the inning with an unorthodox double play. Lynn Jones lofted a fly ball to deep center to score Sundberg, but pinch-runner Onix Concepcion, running for Iorg, failed to tag up on the play and was around second base when the catch was made. He was retired for the third out, but the Royals had crept back to within a run of the lead

“That’s a time when you think, ‘What am I doing here?’” said Concepcion, who had been a reserve infielder for Kansas City since 1982. “You don’t deserve to be here when you pull stuff like that.”12

Brett walked to lead off the bottom of the eighth, moved to second on Orta’s sacrifice, and advanced to third when Balboni beat out an infield single off new pitcher Tom Waddell — a surprising feat for the 225-pound first baseman who was known more for his power (181 career home runs) than his speed (1-for-3 in his career on stolen-base attempts).

White followed with a chopper to third. Brett broke for home, but he was retired in a rundown, though Balboni reached third and White second in the process. Waddell struck out Motley to end the inning and sent down the Royals in order in the ninth to notch his fifth save of the season and put both teams out of their respective miseries.

“It wasn’t a good game,” said Kansas City manager Dick Howser. “It proves everybody is human. I’d like to say I didn’t see it, but it’s out there. You can’t ignore it. You just try to forget about it and hope it doesn’t happen very often.”13

For the only time in his career, Schulze won three straight decisions to improve to 3-0, but his fast start vanished and he crawled to a 4-10 record by year’s end.14 Gubicza fell to 0-2 with the loss, though he finished the season at 14-10 and was a 20-game winner by 1988.

The Royals dropped to 11-9. They toiled near the .500 mark for much of the season’s first half before finally turning things around after losing to the Indians in 11 innings on July 12 to drop to 42-42. Kansas City went 49-29 the rest of the season to win the West Division, then won the American League Championship Series over the Toronto Blue Jays and the World Series over the St. Louis Cardinals.

With several pieces of Cleveland’s rebuild getting closer to the major leagues and a new front-office management staff in place, 1985 was supposed to be the first step forward for a franchise that hadn’t seriously contended for the postseason since 1959. The Indians moved to 8-13 in beating the Royals but were soon trudging through a tough summer and taking a step backward in a 102-loss season — tying the team record for futility (also in 1971 and 1914).15

And the oddities kept coming all the way to season’s end.

On May 22 the Brewers put in a formal protest in the fourth inning claiming Bernazard was using a corked bat. He wasn’t.16

In late July, Corrales made Thompson switch to an underhand, submarine-style delivery. But that didn’t solve Thompson’s struggles — it resulted in a 0-5 record, two blown saves, and a 9.36 ERA.17

Utility player Mike Fischlin’s $15,000 van was stolen on the first night of Cleveland’s final homestand of the season. It was recovered a day later without wheels, the radio, lights, or Fischlin’s clothes.18 A final insult in the tough season — both for the veteran who hit .200 and for a team that badly missed expectations.

“We are going to have a nice little fight for positions in the spring,” Corrales said after the season. “I’m going to roll the balls out there and say, ‘OK boys, go ahead.’”19

1 After three errors proved decisive in Cleveland’s 6-3 loss to Baltimore on April 17, manager Pat Corrales ordered his team to report to the stadium at 10:30 the next morning for infield practice. Had it not been raining after the game, Corrales said, he would have forced the team back onto the field because “[y]ou can’t play like that and expect to beat anyone. Not the Baltimore Orioles or the Westlake (Ohio) Little League club. It was pathetic.” Paul Hoynes, “3 Indians’ Errors Help Orioles Win,” Cleveland Plain Dealer, April 18, 1985: 1-F.

2 Julio Franco, the American League’s leading hitter with a .516 average, was a no-show for Cleveland’s game at New York on April 20. It was reported that he visited old friends after the Indians’ April 19 victory and fell ill, but he did not inform the team of his whereabouts. Paul Hoynes, “Franco Skips Tribe Loss,” Cleveland Plain Dealer, April 21, 1985: 1-C.

3 Bert Blyleven surrendered three home runs at Baltimore on April 28, and when he was taken out of the game after a walk in the eighth inning, out of frustration he sent the fans a pair of obscene gestures. He was fined and suspended by the American League on May 2, but his suspension was rescinded after he publicly apologized and made two $2,500 donations to Baltimore charities. “League Rescinds Blyleven’s Suspension,” Reno Gazette-Journal, June 22, 1985: 2B.

4 On April 29, Cleveland’s Brett Butler slid hard into Kansas City’s Buddy Biancalana to try to break up a double play, and the two began a wrestling match on the infield, which led to a benches-clearing skirmish. (Even Indians manager Pat Corrales returned to the field despite his ejection earlier in the game.) Paul Hoynes, “Indians’ Late Rally Falls Short,” Cleveland Plain Dealer, April 30, 1985: 1-D.

5 Cleveland left the bases loaded twice and left two runners on base in five innings on the way to breaking the club record for a nine-inning game. Cleveland’s overall record came when the Indians stranded 24 runners on base against the Philadelphia Athletics in an 18-inning, 18-17 loss on July 10, 1932.

9 Thompson made a fielding error on Darryl Motley’s grounder back to him. Jim Sundberg knocked a groundball to the mound in the next at-bat, but Thompson threw wild to first.

11 According to Stathead, no other pitcher since 1901 has an appearance lasting 1⅓ innings with no official at-bats against him.

14 The 22-year-old Schulze was demoted to the Triple-A Maine Guides after the Indians lost nine of his starts in a row between May 5 and June 20. He returned to the majors in September.

16 The Brewers won the game 6-5, so the protest was withdrawn, but Bernazard was absolved of wrongdoing by the league office two days later. “Bernazard Is Innocent,” Mansfield (Ohio) News-Journal, May 26, 1985: 11-C.