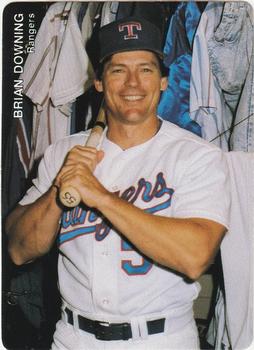 Due to a Texas Rangers promotional giveaway, there were 20,000 souvenir wooden baseball bats in the stands at Arlington Stadium on May 18, 1991, but it was the lumber in the Rangers’ batter’s box that did the damage, as Texas pounded local hero Roger Clemens and the Boston Red Sox.

In front of a Saturday-night crowd of 42,696 — the third largest in Arlington Stadium history1 — including Clemens’ two sons and more than 50 family members and friends,2 the former Texas Longhorns All-American was hammered for nine runs, matching his career high, on 13 hits.3

The Rangers came into the game at 16-14 and in third place in the AL West, but recently they were just as hot as Clemens — they had won five straight games5 and hit .344 as a team during the streak. Texas had also enjoyed recent success at home against Clemens — in the previous two seasons he was 1-2 with a 4.28 ERA in four starts at Arlington Stadium.

Texas started left-hander Kenny Rogers. After a disastrous start to the season, losing his first three outings while allowing 17 earned runs in 11⅔ innings, Rogers had won his last two starts to improve his record to 2-3 and lower his ERA to 7.96.

Boston missed a chance to jump ahead in the top of the first inning. Wade Boggs and Jody Reed singled, and with one out Jack Clark walked to load the bases. But Rogers escaped by getting Kevin Romine to pop up to the catcher and Tom Brunansky to ground to first.

In the bottom of the first, Brian Downing hit Clemens’ first pitch of the game into the left-field stands for his 250th career home run.6 The blast ended Clemens’ homerless streak of 163⅓ innings; his last homer surrendered had been to Texas’s Jack Daugherty on July 8, 1990. Downing — an offseason free-agent who signed at age 40 after 13 seasons with the California Angels — was the first right-hander to take the Boston ace deep in 323⅓ innings since Clemens allowed a homer to Jose Canseco on September 15, 1989, at Fenway Park.7

Although Clemens retired the next three batters on groundballs, the tone had been set.

“Normally, I don’t swing at the first pitch,” Downing said. “But Kenny getting out of the [top of the first] inning unscathed picked everybody up. I haven’t played in three days and I haven’t been very aggressive at the plate. I thought it was a good time. I just said the first thing he throws I’m going to swing hard and try and pull it for an extra-base hit and try and get us off on the right track.”8 “Brian got us on the board right away,” Steve Buechele added. “From then on, we were swinging the bats pretty good.”9

Clemens struck out Julio Franco and Kevin Reimer to start the second before allowing a two-out double to Juan Gonzalez that just missed being a home run by a few feet.10 But Gonzalez was stranded when Buechele grounded to shortstop.

The Red Sox tied the game in the third. With one out, Reed walked. After Ellis Burks flied out, Clark walked to put two on; Romine followed with a double to left to score Reed.

Texas answered with four runs in the bottom of the third. Clemens began with a strikeout of Jeff Huson but surrendered a single to Downing and a double to Geno Petralli.11 Downing tried to score on Rafael Palmeiro’s grounder to first but was cut down for the second out.

Clemens was one out from getting out of the jam but gave up RBI singles to Ruben Sierra and Franco to give the Rangers a 3-1 lead. Reimer capped the scoring with a liner to left; Romine attempted a shoestring catch,12 but the ball got by him, allowing Sierra and Franco to score. After intentionally walking Gonzalez, Clemens finally ended the inning with a groundout by Buechele.

Rogers got two outs to start the fourth, but Luis Rivera tripled to center field and Boggs walked. Rogers appeared to be out of the inning when Reed grounded to shortstop, but Huson booted the ball, allowing Rivera to score. Burks walked to load the bases and Clark followed with his third walk of the game to bring in Boggs and make the score 5-3. Romine forced Burks at second to end the inning.

In the fifth, Boston loaded the bases when Carlos Quintana drew a one-out walk. One out later, Rivera singled and Boggs reached on an error by Rogers. But Reed grounded to second for the third out.

With one out in the fifth, Clemens allowed a double to Franco and walked Reimer but retired Gonzalez and Buechele to end the threat.

After Burks opened the sixth with a double to left, Goose Gossage relieved Rogers. Mike Greenwell ran for center fielder Burks, who had slipped and strained his hamstring trying to catch Petralli’s double in the third.13

Clark walked, his fourth of the game. One out later, Brunansky singled to fill the bases. Quintana forced Romine at second base, but Greenwell scored to cut the Rangers’ lead to 5-4.

After the game Downing remarked, “My biggest fear when we were ahead 5-1 was they would come back and tie the score at 5-5. If they get the score tied 5-5, Clemens would have gotten that second life and would have been very difficult to score on.”14

Downing’s fear never materialized because Clemens allowed four consecutive hits to start the bottom of the sixth. Huson led off with a single and took third when Downing executed a perfect hit-and-run15 for this third hit of the game.

“How he hits that ball in the vacant hole, I’ll never know,” Texas manager Bobby Valentine said. “That ball was up in his eyes.”16

With runners on the corners, Petralli singled to shortstop on the first pitch to bring in Huson. Palmeiro followed with a single, scoring Downing.

Boston manager Joe Morgan pulled his ace and brought in Daryl Irvine for relief. Irvine allowed a two-run triple to Sierra and a walk to Franco before striking out Reimer for the inning’s first out.

Sierra scampered home on a wild pitch as Gonzalez walked. Buechele capped the eight-run inning with a first-pitch, three-run home run to deep left field to put Texas up 13-5.

Valentine turned to left-hander Jim Poole to close out the game. Poole allowed just one run in the final three innings; in the ninth Quintina led off with a single, moved to third on John Marzano’s double, and scored on a sacrifice fly by Rivera. The three-inning stint earned Poole the first save of his career and one of just four saves in his 431 big-league games.

Despite allowing six hits and seven walks in five innings, Rogers picked up the win; he yielded four runs — but just two were earned. Boston loaded the bases against Rogers four times in five innings but failed to score in two of them, the first and fifth.

Clemens spoke candidly about his off night. “Downing set the tempo,” he said. “If you’re going to score, usually you’re going to do it early. I didn’t have command and they had their own way.”17

Regarding Downing’s homer to start the game, Clemens remarked, “Now I can shut the book on the [homer] streak. The guys were even kidding me on the bench because they knew I didn’t have it. I had no control. It was frustrating. I was trying to be picture perfect and it caught up with me.”18

Petralli, who had three hits against Clemens, observed, “Any time you’ve got a guy who is considered the best and he doesn’t have his best stuff, you better get your hits then.”19

“I didn’t predict that one,” remarked Valentine. “But we’ve been feeling good offensively and that’s a good time to face the best. I don’t think he had his best stuff; his location wasn’t what we’ve been seeing on films.”20

Clemens faced the Rangers one more time in 1991. On July 22 at Texas, he pitched a complete game but lost 2-1; the Rangers were the only AL team he did not defeat during the 1991 season.

Clemens finished the season 18-10 while leading the AL with a 2.62 ERA, 241 strikeouts, and 271⅓ innings pitched. He won his third Cy Young Award in six seasons.

Boston finished 84-78, tied for second with Detroit, seven games behind Toronto in the AL East. Texas was one game better at 85-77, but in third in the AL West, 10 games behind Minnesota.

The author attended this game with his sister. They did not arrive at the ballpark in time to get a bat as a souvenir. But they sat in the outfield and heard the bats being banged on the metal bleachers for nine innings.

3 Clemens had previously given up nine runs, on a career-high 15 hits, to the Yankees at Fenway Park on June 13, 1988. He would allow nine earned runs in a game four more times in his career.

4 Clemens finished second in the Cy Young Award voting to Bob Welch, who was 27-6 and finished third in the AL MVP ballot behind Rickey Henderson and Cecil Fielder.

5 Their streak would reach 14 straight games before they lost 3-0 to Minnesota on May 28.

6 It was just Downing’s second homer of the season. Although this was only the author’s second Rangers game of the season, he also witnessed Downing’s first homer of 1991, on April 14. The story of that game can be found here. https://sabr.org/gamesproj/game/april-14-1991-nolan-ryan-pitches-5000th-career-inning-beats-baltimore-for-303rd-win/.

11 Petralli finished with a career average of .364 against Clemens; he was 16-for-44 with two doubles and two home runs. His 44 at-bats against Clemens were the most he had against any pitcher.