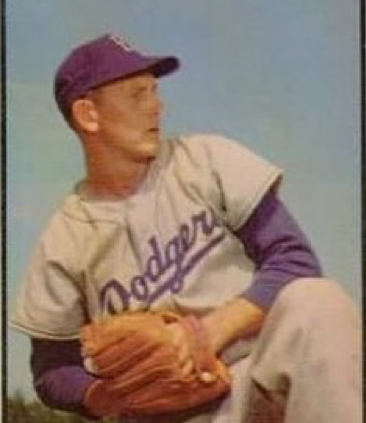 “It’s too hot for a sermon today. Go home, keep the commandments, and say a prayer for Gil Hodges. — Father Herbert Redmond1 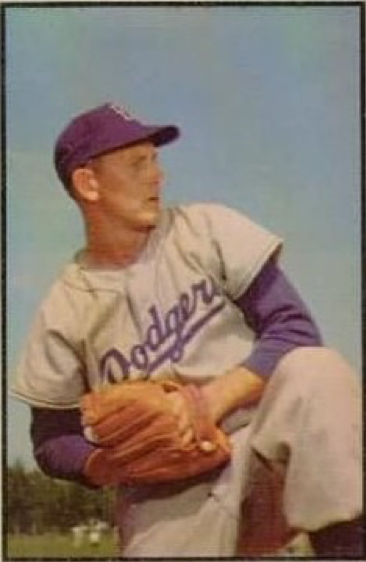 Every baseball game has a story. This one has several. Sometimes the story just centers on the action and statistics generated inside the ballpark. This one stretches well beyond. And sometimes the game’s classic confrontations are on full display, as they were on this day.

Ted Williams, perhaps the greatest hitter in baseball history, contended that hitting a baseball was the single most difficult task in all of sports, requiring “a greater finesse to go with physical strength, that has as many variables and as few constants.”2 After all, the .300 hitter fails at his craft seven out of ten times. Batting slumps with both physical and mental attributes are common and anxiety and lack of confidence are often difficult to overcome as the player’s “0-fer” continues.3 After the fact, they become the fodder for humor.

Dodgers fans sympathetically remember Gil Hodges’ 0-for-21 batting slump in the 1952 World Series. In the midst of losing another World Series to the Yankees, they sent him all manner of cards, letters, best wishes, batting tips, prayers, and condolences. “My warmest memory in baseball.” said Hodges years later. “What I’ll never forget is the way fans rallied around rather than dig a ditch for me.”6

Hodges’ batting slump extended well into the 1953 season, but the support of Dodgers fans never wavered. In his classic, The Boys of Summer, Roger Kahn wrote, “More than thirty people a day wrote to Hodges. Packages arrived with rosary beads, rabbits’ feet, mezuzahs, scapulars.”7 On May 17 Hodges was batting just .187 as Father Redmond addressed the parishioners at the 10 o’clock Mass at St. Francis Xavier Roman Catholic Church in Brooklyn.8 Now just one week later, would this Sunday be the day that Hodges began the turnaround from a .181 batting average that had produced only one home run and five RBIs over 32 games?

Russ Meyer (3-1, 4.53 ERA) started for the Dodgers, giving him a chance to beat his former teammates. With Don Newcombe in military service, the Dodgers needed a right-handed starter and obtained Meyer from the Philadelphia Phillies in a four-team trade in February.9 Curt Simmons (6-2, 2.15 ERA) started for the Phillies, having already beaten the Dodgers twice this season with complete-game performances. Just one week before, Simmons pitched the game of his career in one-hitting the Milwaukee Braves. He was near-perfection, retiring 27 batters in a row after Bill Bruton led off the first inning with a single.

Jim Gilliam opened this game with a line-drive double into the right-field corner and advanced to third when right fielder Johnny Wyrostek misplayed Pee Wee Reese’s liner. Gilliam scored on Jackie Robinson’s line out to center for a 1-0 Dodgers lead. The Phillies tied the score in the second inning when Earl Torgeson singled to center, stole second base, and scored on Granny Hamner’s single.

The Dodgers regained a one-run lead in the top of the fourth. Hodges and Billy Cox singled with one out. Simmons walked Duke Snider to load the bases, then made an error fielding Carl Furillo’s hopper toward third, allowing Hodges to score. The fiery Meyer, nicknamed The Mad Monk, killed a bases-loaded scoring opportunity by grounding into a double play to end the inning and couldn’t have been too happy. With the Dodgers leading 2-1, the stage was now set for some Meyer-inspired fireworks!

Richie Ashburn was the first batter in the bottom of the fourth inning. On a 1-and-1 count, Meyer thought his next pitch was a strike, but umpire Augie Donatelli called it a ball and Meyer was even more upset when Ashburn then lined a single to right. Was Meyer still thinking about that double play? The next batter was Johnny Wyrostek. “When Donatelli called a third straight ball, Meyer’s top blew sky-high.”10 It took Dodgers manager Charlie Dressen, catcher Roy Campanella, and the entire Dodgers infield to calm down Meyer, who then walked Wyrostek. Meyer got a called strike against Mel Clark, the next batter, but after Donatelli called a third ball, Meyer went ballistic and charged off the mound toward the umpire. His teammates got him back to the mound.11 Meyer decided it was time to use the rosin bag as a prop, throwing it into the air before it landed on the top of his cap. Donatelli had seen and heard enough and ejected Meyer.

Jim Hughes replaced Meyer with the bases loaded. He managed to yield only one run when Ashburn scored on Torgeson’s groundout, but didn’t survive the fifth inning after walking the first two batters. Rookie pitcher Johnny Podres also faced a bases-loaded circumstance after intentionally walking Del Ennis, but he retired the Phillies without a run. The Dodgers took the lead, 3-2, for good in the sixth inning. Cox lined a two-out single to left and scored the third Dodgers run on Snider’s double to the left-field corner. Since the Dodgers pinch-hit for Podres, the last four innings were left for Carl Erskine and he pitched very effectively, limiting the Phillies to three hits without yielding any walks or runs. Now came the offensive onslaught in the Dodgers’ eighth inning, turning a close game into a rout.

The inning started innocently enough when Simmons walked Hodges. The next 12 batters all reached base safely, seven hits, five more walks, 12 runs, before Kent Peterson struck out Erskine on three pitches. “Oisk” couldn’t have been too upset. After all, he had singled in a run earlier in the inning and now had the benefit of a 16-2 lead with two innings to pitch. The offensive highlights of the inning were two bases-loaded triples, one by Reese off Bob Miller, the other by Furillo off Peterson. Phillies pitchers threw 61 pitches in the inning to retire the Dodgers 44 minutes after it began.

The barrage of scoring in the eighth inning set or tied several major-league records.12 The 12 runs were a new record for the most runs by one team at the start of an inning. The bases-loaded triples by Reese and Furillo in one inning were a first occurrence. The Phillies’ use of five pitchers in the inning (Simmons, Miller, Andy Hansen, Paul Stuffel, and Peterson) tied a major-league record. The relief pitching for the Dodgers was noteworthy. Podres recorded his first major-league win and Erskine earned the first of his three saves for the season on the way to a team-leading 20-6 record. 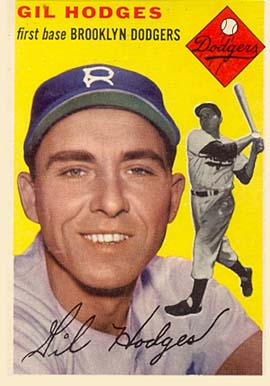 Amid the hysterics of Russ Meyer and the barrage of hitting and scoring in the record-setting eighth inning, the quiet performance of Gil Hodges went relatively unnoticed. Game accounts in the New York Times13 and Brooklyn Daily Eagle14 spoke little of Hodges’ hitting. A batting line of two hits, one walk, one RBI and three runs scored raised his batting average from its depths all the way to .193. Was the batting slump over? It took a few days to answer that question. This day started a six-game hitting streak for Hodges, 12-for-27. In fact, in the next 22 games, he failed to get a hit in only two games and by the time he headed to the All-Star Game in Cincinnati in mid-July, he was hitting .306.

The slump was over thanks to the help of manager Charlie Dressen and the 16-millimeter movies of photographer Barney Stein.15 Hodges had a weakness for the outside curveball that was often exploited by opposing pitchers. Tweaks to his setup, stance, and swing allowed Hodges to do what hitters do best, look for the fastball, while being able to better see that outside pitch. Hodges finished the season with 31 homers and career marks for batting average (.302) and RBIs (122) on the way to another shot at the Yankees in the World Series.

Many years later, Carl Erskine recalled the slump and fond memories of Hodges as a teammate. “The team had real respect for Gil, but the team let him work it out his own way.”16 Erskine noted that perhaps Hodges’ greatest record remains unofficial. “He was never booed at Ebbets Field (must be the only one).”17

As for Meyer, his pitching success was a vital contribution for the pennant-winning Dodgers. He finally beat the Phillies at Ebbets Field in late September and finished the season with a 15-5 record.

Umpire Donatelli had a lot of paperwork to complete after the game. He rid the Dodgers dugout of “bench jockey”18 Billy Loes while Jim Hughes was warming up to replace the banished Meyer. When Hughes came out of the game in the fifth inning, complaining about Donatelli’s strike zone after walking the first two batters, he exited directly to the locker room.19 After Phillies catcher Smoky Burgess took exception to the umpire’s judgment when Snider walked in the record-setting eighth inning, his day was also over, followed very shortly by manager Steve O’Neill.20

Before Donatelli could ensure that Meyer left the dugout after his ejection, his antics were reportedly seen by television cameras and the viewing public. As Roscoe McGowen so eloquently reported in The Sporting News, “Meyer was said to have made some gestures which are not regarded as au fait in the more meticulous circles of society.”21

The reaction to Meyer’s antics in the dugout was mixed. Commissioner Ford Frick, who took no action, considered that “the dugout is more or less his home while he’s at the ballpark and the TV cameras have no business focusing on things that occur there.”22 Philadelphia’s WFIL-TV assumed that some disciplinary action against Meyer would be taken and suggested that “we are always alert to prevent such happenings,” but Dodgers manager Charlie Dressen didn’t buy that: “They can’t be too alert if they put their cameras in the dugout.”23 Days later, Philadelphia police commissioner Thomas J. Gibbons responded to dozens of public queries regarding Meyer’s dugout behavior, warning the pitcher of “appropriate action” if it happened again.24

National League President Warren Giles suspended Meyer for three days and fined him $100 based solely on Donatelli’s report of actions on the field of play. “For about the next 10 years baseball had a “Meyer” rule that forbade cameras in the dugout.”25

The author accessed Baseball-Reference.com for box scores/play-by-play information (baseball-reference.com/boxes/PHI/PHI195305240.shtml) and other data, as well as Retrosheet.org (retrosheet.org/boxesetc/1953/B05240PHI1953.htm).

3 Paul Dickson, The Dickson Baseball Dictionary, 3rd Edition (New York: W.W. Norton & Company, 2009), 589. “Descriptive of a batter who fails to get a hit in any number of at-bats in a game or series of games.”

11 A published photo captures the essence of the main characters in this essay. The fiery Russ Meyer is arguing vociferously with the umpire while the calm and quiet Gil Hodges is standing next to him for support (Philadelphia Inquirer, May 25, 1953: 29; The Sporting News, June 3, 1953: 7).

15 Clavin and Peary, 157. “Hodges told the AP’s Frank Eck: ‘Charlie had Barney Stein [New York Post and Dodgers photographer] take16 millimeter movies of my swing from all sections of Ebbets Field while I was in the slump. … I didn’t want to believe the things I was doing wrong at the plate but the movies convinced me.’”

18 Paul Dickson, 99. “One who verbally abuses or yells derisive comments at opposing players or umpires from the safety of the dugout.”

20 McGowen. “Dodgers, in Beating Phils, Get Record 12 Runs in Eighth Before Out Is Made.”

21 McGowen. “Wasn’t It Dressen Who Predicted He Could ‘Handle Russ Meyer’?”