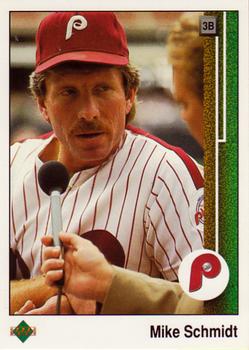 When Mike Schmidt retired on May 29, 1989, during his 18th season with the Philadelphia Phillies, he was widely regarded as the greatest third baseman of all time.

Selected in the second round of the June 1971 amateur draft, Schmidt, an Ohio University product, reached the majors in 1972. A breakthrough season followed in 1974, his second full campaign in Philadelphia. At age 24, Schmidt led the major leagues with 36 homers, earning the first of eight home-run crowns, and finished sixth in the National League MVP voting for a Phillies club that was on the rise after several down seasons.

By the end of the 1988 season, Schmidt had amassed 10 Gold Gloves, six Silver Slugger Awards and three MVP Awards. He had led the Phillies to five division titles, two NL pennants, and the franchise’s first-ever World Series championship in 1980. In 1987 he became the 14th major leaguer to hit 500 career home runs.

Dealing with nagging injuries at the age of 39, however, Schmidt struggled both physically and mentally early in 1989, after an injury-plagued 1988 left him with his worst numbers since 1973 (.249, 12 home runs, 62 RBIs). In the middle of a West Coast road swing at the end of May, he decided it was time to walk away from the game gracefully.

May 28, 1989, was a typical windy day in San Francisco’s Candlestick Park, and the 51,498 fans in attendance to see the Giants battle the Philadelphia Phillies had no idea that it would be Schmidt’s last major-league game. The Phillies had finished last in the NL East Division in 1988 and were in the cellar again with an 18-27 record. They had lost four games in a row and 21 of 30.

With San Francisco just one game behind the Cincinnati Reds in the NL West, Giants pitcher Rick Reuschel, aiming for his majors-leading ninth win, faced off against the Phillies’ top winner, Ken Howell. After an uneventful first inning, the Phillies jumped on Reuschel for three runs in the top of the second, thanks to two Giants errors.

Schmidt led off with a routine fly ball to center for the first out. This continued his season-long slump that produced only two hits in his last 37 at-bats, dropping his average near .200. But Dwayne Murphy singled to right and moved to third when the Giants’ Will Clark booted Curt Ford’s grounder to first. Dickie Thon singled to center to score Murphy, and both runners advanced when Brett Butler misplayed the ball for the second error of the inning. Catcher Darren Daulton’s single through the hole between short and third scored Ford and Thon to put the Phillies on top 3-0.

The Giants got one run back in the bottom of the inning on a Phillies error. Ernie Riles led off with a triple to deep center field. Tracy Jones hit a weak grounder to shortstop, but Thon mishandled the ball, allowing Jones to reach first and Riles to score. Howell recovered by striking out Terry Kennedy and inducing groundball outs off the bats of Jose Uribe and Reuschel.

San Francisco tied the score in the third inning, aided by Howell’s three wild pitches. Robby Thompson walked with one out. With Clark batting, Howell unleashed two wild pitches, the first advancing Thompson to third and the second allowing him to scamper home. After walking Clark, Howell tossed another wild pitch, enabling Clark to take second. The Giants’ only hit of the inning, a line-drive double by Kevin Mitchell, scored Clark. Howell walked Riles, but the inning ended when Jones grounded into a double play.

The Phillies were quickly retired in the fourth inning, and the wheels came off in the bottom half of the inning. Kennedy led off with a walk, the fourth issued by Howell. Uribe’s grounder forced Kennedy at second, and Reuschel’s bunt advanced Uribe. Howell then walked Butler. Phillies manager Nick Leyva popped out of the dugout to argue balls and strikes with plate umpire Gary Darling and immediately was tossed from the game. Leyva and the Phillies had not been happy with Darling’s strike zone all day. Leyva said, “Everyone has bad days, but he’s been behind the plate four times with us, and he’s had four bad games.”1

After the dust settled, Thompson hit a grounder to Schmidt at third, but Schmidt booted the apparent third out for his team-leading eighth error. Clark stepped to the plate, and on a 0-and-1 pitch Darling called a ball. Howell shouted something to Darling and he was ejected from the field. “If anyone can hang himself for this loss, it’s me,” Howell said. “I deserved to get thrown out for what I said.”2

Mike Maddux replaced Howell and threw a low inside curveball on the third pitch. Clark golfed it over the right-field fence for a grand-slam to put the Giants on top, 7-3. Maddux had struck Clark out three times 12 days earlier in Philadelphia, but Clark made adjustments. “He struck me out three times before on curveballs down and in and I learned my lesson,” Clark said.3 Maddux said, “I made my pitch. You’ve got to give credit where credit is due. That guy can hit.”4

The Phillies tried to mount a comeback but fell short. Bob Dernier was summoned to pinch-hit for Maddux in the fifth. He took a called third strike and continued the feud with Darling. Darling’s patience was short by this time and Dernier was expelled from the game. One out later, Tom Herr and Von Hayes hit back-to-back doubles, scoring the Phillies’ fourth run. Schmidt stepped to the plate, took ball one from Reuschel, and grounded out to shortstop to end the inning.

San Francisco restored its four-run lead in the sixth when Uribe led off with a double, took second on a sacrifice by relief pitcher Terry Mulholland, who had replaced Reuschel in the top of the inning, and scored on Jeff Parrett’s wild pitch. It gave the Giants eight runs on just four hits. All of San Francisco’s hits went for extra bases, and the Giants benefited from sloppy Philadelphia play: six walks, one hit-by-pitch, four wild pitches, and two errors.

Schmidt batted again in the seventh inning. With a runner on first, he hit a weak grounder to short that Uribe couldn’t handle, and Schmidt reached first. Official scorer Mike Lefkow originally ruled it a hit, but later changed it to an error, San Francisco’s fourth of the game. After the game, Phillies publicity director Vince Nauss called the Giants front office to request that it be changed back to a hit, but was rebuffed. Schmidt walked in the ninth inning with one out to load the bases. Mark Ryal’s RBI single cut the deficit to 8-5, but Ford grounded into a double play to end the game and, as it turned out, Schmidt’s career.

On the plane ride to San Diego that night, Schmidt informed Leyva that he was retiring the next day. The Phillies called a news conference before the night game in San Diego and Schmidt announced his retirement. “It came down to pride, to wanting to play the game at the level I set for myself. And I just could not do that anymore, Schmidt said.”5 In the Philadelphia Inquirer, Jayson Stark described Schmidt’s career, writing, “He was a symbol of the most glorious era in Phillies history, an era of which he was the centerpiece.”6

Achieving a first-ballot election with 96.5 percent of the vote, Schmidt, whose 548 home runs ranked seventh in major-league history when he retired, was inducted into the Hall of Fame on July 30, 1995, with 28,000 Phillies fans on hand to honor his long and illustrious career.

In addition to the sources cited in the Notes, the author consulted Baseball Reference and Retrosheet for information including the box score and play-by-play. Also consulted was Steve Ferenchik and Henry Kirn’s SABR Baseball Biography Project article on Mike Schmidt.