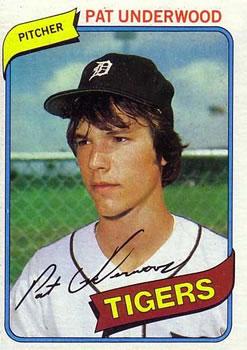 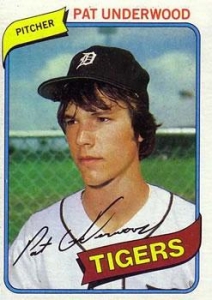 Mothers are often their sons’ biggest rooters when they begin playing youth baseball. But on May 31, 1979, baseball mom Helen Underwood didn’t know who she was going to root for when her youngest son, Pat, was scheduled to start for the Detroit Tigers in his major-league debut. Her dilemma stemmed from the fact that her son Tom was the opposing pitcher for the Toronto Blue Jays. She admitted that she had prayed for rain so that she wouldn’t have to choose between her sons.

Ms. Underwood wasn’t the only one who was apprehensive about the matchup. A few days before the game, Tom Underwood told the Detroit Free Press, “I think it’s stupid. It will be the first game of his major-league career and they’re making him start against his brother. … I’m not sure it’s really fair to Pat. There’s enough pressure on you when you’re pitching your first game in the big leagues without worrying about beating your brother.”1

Pat Underwood had been a highly touted high-school prospect from Kokomo, Indiana, evidenced by his being the second overall pick of the 1976 amateur draft by Detroit. Two other future Tigers pitchers, Dan Petry (fourth round) and Jack Morris (fifth round), were selected in the same draft year. By his second season in the minors, Pat Underwood was already pitching in Triple A.

Tom Underwood, born just over three years before Pat, was suffering his worst start of a season since he broke into the majors in 1974. He was making his 11th start and had posted a dismal 0-6 record, with his last three losses coming in one-run games.

Tom Underwood’s performance was also indicative of how the Blue Jays had fared to date. Claiming only 12 wins in 49 games, Toronto, in its third season after joining the American League as an expansion franchise in 1977, was already 18½ games out of first place coming into the contest on May 31.

The Tigers, under manager Les Moss, came into the game with a 21-21 record and fifth-place position in the AL East standings.

Pat Underwood hadn’t pitched in 10 days when he drew the starting assignment from Moss.3 With Pat slated to oppose his brother, they became the fourth set of brothers to oppose each other in the majors.4 The other brother pairs included Virgil and Jesse Barnes, Phil and Joe Niekro, and Jim and Gaylord Perry.

When Tom Underwood dropped off his brother at his hotel before the game, he told Pat, “Let’s put on a show. We’ve got the center stage. It may never happen again.”5

Members of the Underwood family were on hand for the game. Helen attended with her oldest son Mark, but her husband had to miss the game because of the death of a co-worker’s spouse. Obviously nervous about the outcome, Ms. Underwood said before the game, “Maybe it will be 0-0 at the bottom of the ninth and it will rain and they’ll call the game.” She added, “You can’t imagine how I feel. Here’s Pat in his first major-league appearance facing Tom who’s pitching well but struggling for his first win of this year. I’m so nervous I’m shaking all over.”6

The crowd of 12,423 at Exhibition Stadium in Toronto was anxious for the Blue Jays to get their first win of the four-game series after losing the first three contests. What they got was another loss, but they were treated to a well-pitched game by both teams that lasted eight minutes shy of two hours.

Pat Underwood had a perfect game through the fourth inning. Tom was also effective, giving up only three singles and a walk through five innings.

Meanwhile, Tom Underwood continued to dominate, as he blanked the Tigers in the sixth and seventh innings. But he yielded the only run of the game in the eighth when Jerry Morales led off with his fourth home run of the season, over the 370-foot fence in left-center field.

Pat Underwood allowed a runner to reach second base for only the second time in the bottom of the eighth, when 20-year-old rookie Danny Ainge, who had made his own major-league debut just 10 days earlier, on May 21, singled and advanced on Cerone’s fielder’s choice. Pat, however, got out of the inning when he picked off Ainge—an all-Western Athletic Conference basketball player at Brigham Young University during the recently concluded 1978-79 season—at second base.

Seemingly on his way to a complete game, Pat Underwood induced pinch-hitter Bob Robertson into a groundout in the bottom of the ninth. After 21-year-old shortstop Alfredo Griffin doubled, however, Moss replaced Underwood with Dave Tobik.

Pat Underwood walked off the field to a standing ovation from the Blue Jays-friendly crowd, similar to what his brother had received a half-inning earlier when he finished setting down the Tigers in the ninth. Righty Tobik faced right-handed hitter Bob Bailor, who flied out.

Moss went to the bullpen a second time to create another advantageous matchup. Left-hander John Hiller was summoned to face lefty-swinging Roy Howell, who struck out to end the game and preserve Pat Underwood’s first major-league win.

Pat Underwood threw only 90 pitches to the 28 batters he faced.7 He gave up three hits and a walk while striking out four. Tom Underwood’s complete-game gem included six hits, two walks, and six strikeouts.

After the game Pat Underwood said, “I hadn’t pitched in 10 days. In the sixth inning I was getting tired. My arm was falling behind. I started hanging my curveball and that’s what they hit.”8

On his decision to relieve Pat Underwood, Moss said, “I knew when I went out to the mound I was going to take him out in the ninth. That was a lot of pressure for a young pitcher. He let the ball get away from him for the double and I had all the guys [relievers] ready.”9

Pat Underwood grappled with the thought of his brother taking the loss. “Maybe I shouldn’t say this, but in the ninth inning when they took me out, I was kind of hoping [Toronto’s] Roy Howell would hit a homer. I wouldn’t have gotten the loss, but Tom would have been the winner. He just pitched too well to lose.”10

Tom Underwood, who extended his personal losing streak to seven games in 1979 and 11 consecutive losses over two years, had praise for his brother. “I’m awfully happy for Pat. He pitched great and deserved to win. Naturally, I would have liked to win, but I pitched well against the second-best hitting team in the American League. There’s not much difference in being 0-6 and 0-7, but the win was really important to Pat.”11

Pat Underwood finished the season with a 6-4 record and a 4.59 ERA in 15 starts. He pitched in three more seasons for the Tigers but suffered from an elbow injury that nullified a trade with the Cincinnati Reds in 1983. The Tigers released him before they won the World Series in 1984.12

Even though Tom Underwood lost 16 games for the Blue Jays in 1979, he was one of their best pitchers, with a 3.69 ERA, and was the team leader in strikeouts. The Blue Jays traded him to the Yankees over the winter. Tom pitched through the 1984 season, retiring with 379 appearances for six teams.

Helen Underwood was spared in having to watch her sons oppose each other in further major-league games. They never started against each other again. They pitched in the same game again only once, when the Tigers played the Yankees on September 28, 1980, although they were not in the game at the same time.

In addition to the sources cited in the Notes, the author consulted Baseball-Reference.com and Retrosheeet.org for pertinent information, including the box score and play-by-play.