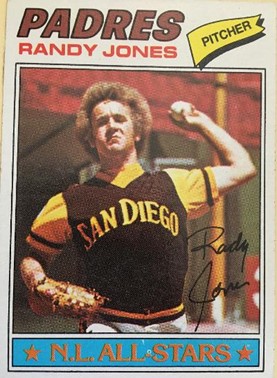 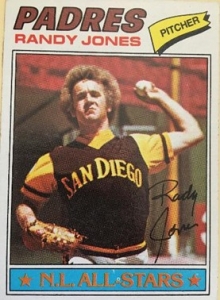 What happens when two pitchers who are proud of how quickly they work face off? How about the shortest game in San Diego Padres history at 1:29?1

Jim Kaat was pitching for Philadelphia (9-10, 3½ games behind the Pirates in the NL East). He had a reputation as a quick worker on the mound. In 1977 the 38-year-old Kaat was at the tail end of his Hall of Fame career – which dated to 1959 – surviving on guile and skill rather than pitch speed.2 This was his first start of the year after five relief appearances. Manager Danny Ozark had kept Kaat in the bullpen because the Phillies’ early-season schedule had allowed him to use only four starters.3 Kaat’s last two appearances had been less than memorable: Seven earned runs allowed in 1⅓ innings pitched, leading to an inflated 15.43 ERA.

San Diego starter Randy Jones (1-4, 5.88 ERA) also made a point of his efficiency. As detailed by SABR biographer Alan Cohen, Jones’s idea of a perfect inning was three outs on three pitches. Apparently National League Cy Young Award voters in 1976 were impressed with his approach: He won the award that season after leading the league with 22 wins and 25 complete games.

Jones had faced the Phillies three times on their path to the NL East title in 1976 and shut them out all three times. The last time the Phillies had beaten him was June 4, 1975. His 1977 record4 though, paralleled the Padres’ start to the season – at 9-17 they were already 11½  games behind the Los Angeles Dodgers in the NL West.

The 27-year-old Jones set the tone for the game from the start. He (as well as Kaat) minimized his warm-up pitches before each inning.5 He issued a two-out walk to future Hall of Famer Mike Schmidt in the top of the first, but then picked him off for the third out.

Kaat was not as efficient when the Padres batted in the first. After a two-out walk to Merv Rettenmund, future Hall of Famer Dave Winfield followed with a double, sending Rettenmund to third. Kaat escaped the inning when Gene Tenace flied out.

Jones worked a clean inning in the top of the second. His go-to pitch was a sinker that broke away from right-handed hitters.6 It had been described as “too good to take and too hard to hit.”7

Kaat was not so lucky in the second. Mike Champion hit a one-out double and Bob Davis reached on an error, putting runners at the corners. Kaat struck out Jones for the second out, but Gene Richards’ single scored Champion for the first run of the game. That was all, though – Bill Almon grounded out to end the frame.

The Phillies tied it up in the top of the third. Ted Sizemore singled, then advanced to third on two groundouts. He scored on Garry Maddox’s single, tying the game, 1-1. Jerry Martin grounded out to keep it tied.

The tie didn’t last long: The Padres took the lead in their half of the third. Rettenmund and Winfield singled and advanced to second and third on Tenace’s fly out to center. Kaat intentionally walked Doug Rader to load the bases for a potential double play. That strategy almost worked: Champion grounded to second but beat the throw to first, allowing Rettenmund to score.8 Davis’s fly out ended the inning, but the Padres had a lead they wouldn’t relinquish.

Between the top of the fourth and the top of the seventh, the pitchers faced the minimum number of batters. Kaat induced one fly out and eight groundouts, including one on a comebacker, allowing him to show off his Gold Glove form.9 Jones sprinkled in a few more fly outs and allowed a single to Schmidt in the top of the seventh (but then erased him on a double play). The first six innings took only 56 minutes.10

The action picked up again in the bottom of the seventh. Jones doubled to lead off the inning. Rookie Richards hit his first career home run, giving the Padres a 4-1 lead. Richards had been batting .188 coming into the game, but his 2-for-5 performance moved his average above the Mendoza line for good.11 Kaat got Almon to fly out for the first out of the inning. But after he gave up another single to Rettenmund, Ron Reed took over on the mound and got the last two outs without giving up any more hits.

Jones continued mowing down the Phillies in the eighth – a pop fly and two groundouts and he was back in the dugout.

The Padres threatened to add on in their half of the eighth. Champion drew a one-out walk, then moved to second on Jones’s two-out single. Richards grounded to first to end the threat, and the inning.

In the ninth, Jones did allow his fourth hit of the night, a two-out double by Martin. But that was all he allowed; Schmidt grounded to short to end the game.

The response of the 10,021 fans to the short game was not recorded. Certainly Jones was happy: a complete game win on 91 pitches.12 Kaat found solace as well – despite the loss, he was able to shower and make it to a 9 P.M. concert that evening.13

Not everyone was happy, though. The brisk contest was a downer for Ted Giannoulas, boosting ballpark cheer as the San Diego Chicken, since the Padres paid him by the hour. Not only did he not have time to perform all his antics, his paycheck for the day, based on a $4.00 hourly rate, was $6 – minus taxes.14 The beer vendors were not happy either: Jones recalled them flipping him the bird after his efficient games.15

The Phillies, who were in fifth place in the NL East, seemed stuck in neutral for two months. Then they got hot at the end of June, moving to second place behind the Cubs. They took over first place in the division on August 5, and held that to the end of the season, earning the division title before losing the Championship Series to the Dodgers for the second season in a row. 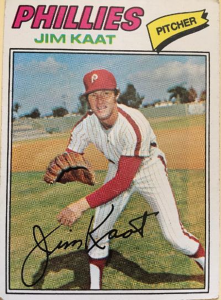 As for Kaat, this game lowered his ERA to 9.00. By the end of the season, he had accumulated a 6-11 record and a 5.39 ERA. He can’t be said to have contributed all that much to the Phillies’ turnaround, as he was “credited” with -1.4 bWAR, the worst mark of his 25-year career. The following year, 1978, was his last year as a regular starter. Despite his advanced age, he put up better numbers than in 1977: 8-5 with a 4.10 ERA. He continued pitching, occasionally starting, through 1983, finally wrapping up his Hall of Fame career as a reliever for St. Louis.

Unfortunately for Jones, this game was not the beginning of a return to his 1976 Cy Young form. This was his best game of 1977 – his only complete game and his highest game score (75). He spent time on the disabled list in June and July as he continued to recover from offseason surgery for a nerve injury in his bicep. He finished the year with a 6-12 record and a 4.58 ERA. He continued pitching through 1982, after a second nerve surgery in 1980,16 but never had another year with a winning record.17 His attempted comeback in 198318 wasn’t successful.

It wasn’t a turnaround for the Padres, either – they finished in fifth place in the NL West, 29 games behind the Dodgers.

Jim Kaat had just been elected to the Hall of Fame by the Veterans Committee when he was the speaker on a SABR chapter call on December 13, 2021. During that call, he mentioned this game when he was discussing how the pace of play, and especially pace of pitching, had changed since he pitched (1959-1983).

In addition to the sources cited in the Notes, the author consulted Baseball Reference.com and Retrosheet.org for pertinent information, including the box scores.

1 Kirk Kenney, “40 Years Ago Today: Padres and Phillies Played a Nine-Inning Game in 89 Minutes,” San Diego Union-Tribune, May 24, 2017, https://www.sandiegouniontribune.com/sports/padres/sd-sp-fastgame-randy-jones-jim-kaat-0404-story.html. Retrieved December 11, 2021. This is not the shortest major-league game (that is 51 minutes on September 28, 1919), but it’s certainly the shortest game since World War II. https://www.baseball-almanac.com/recbooks/rb_gmlg.shtml.

4 Jones had had surgery at the end of the 1976 season to repair a biceps tendon nerve, which may have affected his performance. “Jones Handcuffs Phillies in Hour, 29 Minutes,” Pottsville (Pennsylvania) Republican, May 5, 1977, 5. He had to have the surgery again in 1980. Russ Franke, “Jones Makes a Pitch for More Major Fun,” Pittsburgh Press, February 23, 1983: D2. Perhaps due to those injuries, he was never able to duplicate his 1975 and 1976 successes.

11 He finished with a .290 average and placed third in Rookie of the Year voting.