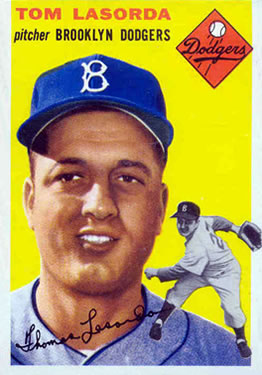 Tom Lasorda is lucky Dodgers fans were willing to give him a second chance.

Lasorda built a Hall of Fame career as manager of the Dodgers from 1976 to ’96, but his first stint with the franchise came as a minor leaguer in 1949. By the mid-’50s, he was a young pitcher trying to break into the major leagues after toiling at Triple A for several seasons. He never amounted to much on the mound, and his performance in his only start for the Dodgers is one remembered for all the wrong reasons.

But all can be forgiven when the team wins.

Brooklyn was among the favorites in the National League in 1955, and after going 17-2 to open the season, the Dodgers turned to Lasorda to start on May 5 against the St. Louis Cardinals. The 27-year-old left-hander had posted solid minor-league numbers and made four uneventful appearances as a reliever in 1954.1 But he came down with a bad case of the yips in his first try as a major-league starter in front of 7,056 fans.

Lasorda tied what was then the National League record with three wild pitches in the first inning, the last of which caused him to get injured while covering home plate. Wally Moon spiked Lasorda on the right knee while sliding in to score after the third wild pitch. But despite a bloody gash, Lasorda went back to the mound and got the final two outs of the inning.

Blood was said to have been “gushing from the wound like a Roman fountain,” and despite the risk of major injury, Lasorda “doggedly refused to come out of the game.”2 Lasorda was persuaded to leave the game before facing a batter in the second inning; he required five stitches at Long Island College Hospital to close the large gash.3

The Dodgers overcame Lasorda’s wildness and injury — and a pregame controversy involving another member of their pitching staff — and continued a red-hot start with their seventh straight victory, a 4-3 triumph over the Cardinals that pushed them to a 7½-game lead over their closest NL rival, the Chicago Cubs.

Fellow starting pitcher Don Newcombe was indefinitely suspended by Dodgers manager Walter Alston for refusing to pitch batting practice before the game. Newcombe had also refused batting practice pitching duties a week earlier, citing his desire to pitch in games. His frustration stemmed from when Alston skipped his turn in the rotation at the end of April for what would have been his fourth start of the season.

“I told him I didn’t want to argue with him, and the only thing for him to do was to take off his uniform and go home,” Alston said.4

The confrontation was short-lived. Newcombe worked to make amends later in the day and was on the hill to pitch the final two innings of the Dodgers’ May 6 game against the Phillies.5

“I’m sorry it all happened,” Newcombe said. “With the club getting away so fast, I wanted to be a part of it. I wanted to help all I could, and I was discouraged because they wouldn’t let me pitch. They promised me a couple of starting assignments but then changed their minds and I got down in the dumps.”6

Dodgers players who were present at Ebbets Field for the May 5 game likely were at least briefly down in the dumps about the prospects of keeping their winning streak intact.

Lasorda walked Moon to open the game, and he advanced to second on a wild pitch. Bill Virdon also walked, and both runners moved up a base on another wild pitch. Stan Musial struck out, but Lasorda uncorked a third wild pitch during Rip Repulski’s at-bat. Moon dashed home and gashed Lasorda when both men and the ball arrived at home plate at the same time. Lasorda recovered to strike out Repulski and got Red Schoendienst out to end the inning without putting his team in a significant hole.

It’s not surprising Lasorda wanted to continue pitching after his injury. Simply put, he was a man hungry to play baseball — even when it meant playing year-round from 1949 to ’54 primarily between Triple A and Puerto Rican winter ball.

Clem Labine drew the assignment of emergency reliever and kept the game within reach over six innings of work. He walked five and allowed five hits, but the Cardinals could only translate that into two additional runs.

St. Louis took a 2-0 lead on Repulski’s RBI single in the third and had a further rally snuffed out when catcher Bill Sarni grounded into a double play with the bases loaded to end the inning.

Labine helped himself in the bottom of the frame. At that point he was 0-for-6 with six strikeouts and a sacrifice, but he sparked a comeback by slugging his first career home run, a one-out solo shot to left-center.8 Jim Gilliam walked and Pee Wee Reese singled to put men on the corners, and after Duke Snider popped out in foul territory, Roy Campanella and Sandy Amoros both hit RBI singles for a 3-2 lead.

The biggest blow off Labine was Virdon’s one-out solo home run in the fifth that evened the score at 3-3. Virdon, a rookie who reached base in all four of his plate appearances, drew walks in the first and third, and poked a single in the seventh to raise his batting average to a league-leading .400.9

“He’s a ballplayer, that one,” Schoendienst said of the eventual runaway winner of NL Rookie of the Year honors. “He’s going to be one of the best.”10

As if the afternoon needed any more unusual twists for the Dodgers, they got a literal one on the way to scoring the winning run in the eighth. Snider led off the inning with a walk, but when Campanella laid down a bunt to sacrifice him into scoring position, the ball seemed to have other ideas. Sarni, along with Cardinals third baseman Ken Boyer and reliever Harvey Haddix, went to field the ball down the third-base line but watched it roll across the foul line and then back into fair territory.

“It went out three, maybe four inches, and then for some reason it rolled back fair,” Sarni said. “There wasn’t a wrinkle in the ground or a roll to it or anything that I could see that would make it come back again.”11

Snider never stopped running to take advantage of Boyer’s absence from his defensive position and narrowly made it to third on the play after Sarni threw out Campanella at first. With the game on the line, Alston and St. Louis manager Eddie Stanky matched wits. Right-handed batter Frank Kellert was announced as a pinch-hitter for the left-handed Amoros, but Stanky made a pitching change, bringing on right-hander Frank Smith to replace Haddix, a lefty. Alston recalled Kellert to the dugout and sent out left-handed Rube Walker, who lifted a pitch to center for a sacrifice fly.12

Rookie reliever Ed Roebuck retired six straight Cardinals over the final two innings to earn his second career victory and send St. Louis to a fourth straight loss in what became a seven-game skid. Haddix took the loss, falling to 1-3.

“Losing like this is bound to get a team down,” Virdon said. “But maybe we can win a couple, pull one out of the fire, and get going. This team has it.”13

That wasn’t to be — the Cardinals finished next to last in the National League with a 68-86 record, giving St. Louis back-to-back losing seasons for the first time since they finished under .500 each season from 1918 to ’20.14 Brooklyn ultimately won 11 straight to open the season at 22-2. The Dodgers comfortably won the pennant by 13½ games with a 98-55 record and beat the New York Yankees in the World Series.

Lasorda wouldn’t fare as well as his team the rest of the season. He made three relief appearances (May 24, June 5, and June 6) but watched his ERA balloon to 13.50 and earned an assignment to the minor leagues. Lasorda was sold to the Kansas City Athletics before the 1956 season, and went 0-4 with a 6.45 ERA and one save in 18 appearances that season. The Dodgers brought Lasorda back to the organization in May 1957, but he never returned to the major leagues before getting released in 1960.

5 Newcombe made plenty of contributions throughout the season and went 20-5 for the Dodgers in 1955.

8 Labine would hit two more home runs during the 1955 season, which were the only three homers of his career.

9 Virdon’s hot start continued the next day when he went 4-for-5 with another home run against the Milwaukee Braves to raise his average to .440. He settled into a .281 clip in 144 games by the end of the season.

14 The Cardinals fired manager Eddie Stanky after 36 games. Harry Walker replaced him on an interim basis.