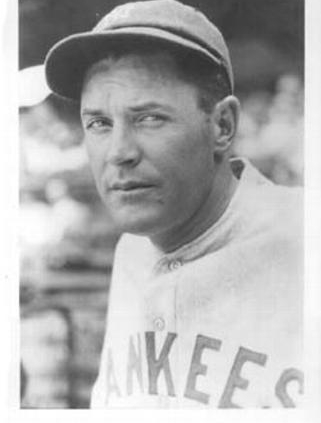 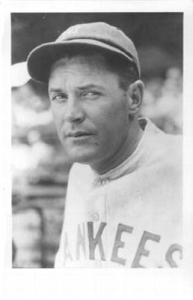 In the second of a two-game series at Griffith Stadium, Bob Meusel and the Yankees “brought about the downfall of the Nationals”1 with the use of the long ball. Former President Woodrow Wilson “drove out to the game and witnessed the contest from the shelter of his automobile, which was parked near the right field fence.”2 He and the rest of the approximately 15,000 spectators were treated to a slugfest that featured a colossal Babe Ruth home run and a cycle by Meusel.

Jack Quinn, “[Miller] Huggins’s veteran spitballer,”3 started on the mound for New York (8-7) which stood in fourth place in the American League. Quinn had spent much of his 10-year career as a starter, but in 1921 he was also used as a reliever in 20 of his 33 appearances. For the second-place Senators (11-7), Walter Johnson toed the rubber. The Big Train was coming off a poor season in 1920, when he registered only eight wins due to “a combination of a bad cold, a sore arm, and pulled leg muscles,”4 halting a 10-year consecutive streak of garnering at least 20 wins per season. The 33-year-old right-hander had already surpassed the 300-win plateau and entered this contest seeking win number three for the season and 308 for his career.

Washington grabbed an early lead in the bottom of the second inning. With one out, “a barrage of singles by Howie Shanks, Frank O’Rourke and Val Picinich, coming in rapid-fire order,”5 resulted in a run and put runners on the corners. Johnson then helped his own cause when he “walloped a long one over Meusel’s head against the right field fence for two bases”6 to bring home O’Rourke (Picinich had stopped at third base). Joe Judge lifted a fly ball to center for the second out, but the fly brought in Picinich for the third tally. On the play, Johnson was caught in a rundown between second and third and was tagged out by Yankees second baseman Aaron Ward for the final out.

Back on the mound, Johnson retired the first two New York batters in the third, but then Wally Pipp worked a walk. Meusel, who had singled in the first inning, sent Johnson’s offering beyond the scoreboard for a two-run homer, hit in the same position where teammate Ruth had launched a home run the day before.

Washington’s four straight hits in the second “convinced Manager Huggins it was not Quinn’s day,”7 and he stayed in the dugout when his team took the field in the bottom of the third, as “Waite Hoyt took up the burden.”8 Hoyt retired Clyde Milan and then Sam Rice skied a ball between shortstop and left field. Roger Peckinpaugh backed up and Ruth came in, calling for the ball. Instead, Ruth “stood still and let it drop to the ground”9 and Rice ended up at second with a double. Frank Brower singled up the middle, advancing Rice to third. Bucky Harris then smashed a deep fly ball to Roth in center for the second out, and Rice trotted home with Washington’s fourth run.

Scoring then ceased until the eighth inning. At one point, Johnson had retired 11 Yankees in a row, until Hoyt and Braggo Roth hit back-to-back singles in the seventh. Now, in the eighth, Ruth led off and “with the count 2 and 2, Johnson rifled one of his fast ones plateward; the great Babe took a vicious cut and the sphere sailed by yards clear of the new high fence recently erected in center field.”10 In just his 16th game of the season, this was Ruth’s eighth home run. In 1920, when the three-time-reigning home-run king swatted a record 54 home runs, he had only two at this point of the season. According to several newspaper accounts, Ruth’s “volcanic clout”11 was the “longest hit ever made”12 at Griffith Stadium. Just the day before, reporters were in awe of Ruth’s seventh round-tripper, which was said to have traveled farther than any other previously-hit ball. However, Number Eight “exceeded the terrific seventh home run by many yards.”13 The New York Times reported that it was a “full fifty yards further.”14 The ball cleared the signboard well beyond the deep center field wall. Had it not been hit so high, the papers claim, “it would have dented the red ‘Hahn’s Shoe’ sign.”15 Instead, it cleared that sign, coming to rest where no other ball had ever gone. The Washington Herald described the phenomenon of Ruth: “Ol’ Bam marched up in the eighth with fire in his eyes. The fans were ‘booing’ as usual. They ‘boo’ before he hits and cheer afterward.”16

After Pipp was retired, Meusel doubled to left and Baker walked. Ward sent a “screaming double”17 into right field, scoring Meusel and sending Baker to third. Johnson then walked pinch-hitter Wally Schang intentionally, loading the bases for Hoyt, who delivered a pitcher’s best friend, a double play, started by Johnson. However, the Yankees had tied the score, 4-4.

The Senators “came right back in their half of the eighth.”18 Harris reached first on a hit-by-pitch but was forced out at second when Pipp made a great throw after fielding Shanks’s sacrifice bunt attempt. O’Rourke singled to right, and Meusel’s throw to third base skipped into the dugout, “rolling to the edge of the players’ bench, where a kid stopped it,”19 allowing Shanks to come home with the Senators’ fifth run.

In the final frame, the Yankees “treated Walter Johnson to a pasting which only ended when two runs had been added to the New York string and the lead regained.”20 There was also a controversial play. Roth led off with an infield single to the left side. Peckinpaugh followed with a hit down the left-field line and when third-base umpire Frank Wilson “called it foul a small sized riot was loose.”21 Players from both teams stormed the field, some to the home-plate umpire Bill Dinneen and others to the spot where the ball landed. The Yankees claimed the ball was fair, but “when the excitement died down the situation was just what might have been expected.”22 Roth retreated to first and Peckinpaugh re-entered the batter’s box, where he proceeded to pop out to short. Ruth also popped out (to second), but then Pipp singled up the middle. With runners on first and second, Meusel drove a “wicked clout to right”23 for a two-run triple which “spelled defeat for the Nationals.”24 In giving the Yankees the lead, Meusel had hit for the cycle.

The Yankees prevailed, 6-5, as Carl Mays came in to pitch a 1-2-3 ninth inning and save the win for New York. The game featured 11 extra-base hits and 27 total safeties. Johnson had offered up the two round-trippers to Meusel and Ruth and had walked four New Yorkers. His earned-run average soared to 3.73. He pitched in six more games before finally earning a victory (on June 1 against the Yankees).

Meusel “continued his remarkable stickwork,”25 appearing to be a one-man nemesis of the Nationals. In the two-game series with Washington, New York’s right fielder had eight hits (four for extra bases) in 10 at-bats, with seven runs batted in and three runs scored. He raised his batting average from .255 to .338 and his slugging percentage from .491 to .646.

The 24-year-old Meusel was in just his second major-league season, and he became only the second New York Yankees player to hit for the cycle (after Bert Daniels on July 25, 1912). In his career, Meusel shared the major-league record of hitting for the cycle three times. This game was his first. A year later, on July 3, 1922, Meusel accomplished the rare feat against the Philadelphia Athletics, and on July 26, 1928, against the Detroit Tigers, Meusel hit for the cycle for the third time.

This was also the first cycle of the 1921 season. Three more players went on to hit a single, double, triple, and home run in the same game that year: the New York Giants’ Dave Bancroft (June 1 against the Philadelphia Phillies), the St. Louis Browns’ George Sisler (August 13 against the Detroit Tigers), and the Pittsburgh Pirates’ Dave Robertson (August 30 against the Brooklyn Robins). Sisler’s accomplishment was the second of his Hall of Fame career.

Ruth kept up his slugging. By the end of May, he had 15 homers. He swatted seven in a five-game span from June 10 to 14, and finished the campaign with a record 59 round-trippers, breaking his own mark. Ruth tagged Johnson for another home run (his 26th of the season) on June 25.