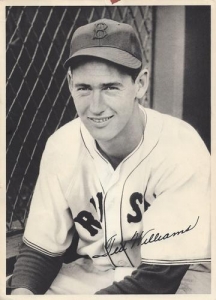 It took two Ted Williams home runs for The Kid to win this game. They were widely separated, the first one coming in the top of the third inning and the second one not until the 11th.

Williams had started the season pinch-hitting in six of his first seven games. In spring training, on March 19, his spikes had caught in the clay as he slid into second base. “I chipped a bone in my ankle,” he later wrote. “For the first two weeks of the season I did nothing but pinch-hit.”1 He told SABR’s John Holway, “I had it taped the whole damn year. But the big thing was, it might have put more restrictions on my swing.”2 And that might have been a good thing, he allowed. It was his right ankle and he was forced him to put more weight on his rear foot. Not playing in the field as much, he also spent more time in the batting cage than usual, all year long.

He’d played four games in left field and then three in right; he was back in left field for this game. The Red Sox had opened the season with two home wins against Washington and then gone on a 12-game road trip. The May 7 game at Comiskey Park was their last game before going back to Boston.

Williams drove in the first run of the game. Leadoff batter Dom DiMaggio had grounded out, short to first, but right fielder Stan Spence doubled “over [center fielder] Mike Kreevich’s head”3 and Williams drove him in with a single pulled to right field. Jimmie Foxx and Joe Cronin both hit fly-ball outs to left.

The Red Sox starter, Broadway Charlie Wagner, retired the side in the first and the second.

The Red Sox had gone down in order in the top of the second, but in the third inning Wagner led off with a double to left-center field. Dom DiMaggio singled to center and Wagner scored.  Spence flied out. With Williams at the plate, DiMaggio was picked off first. The pitch Williams hit produced just one run, when he “lashed a homer well up into the seats in the upper grandstand in right-center.”4 Foxx then struck out. The Red Sox led, 3-0.

In the bottom of the fourth, the White Sox narrowed to lead to one run. Poor fielding was to blame. Their first two batters reached on back-to-back infield errors – by third baseman Jim Tabor and second baseman Bobby Doerr – on groundballs. On the first one, the White Sox’ Bill Knickerbocker found himself on third base and Luke Appling wound up on second, with nobody out. Joe Kuhel flied out to right but not deep enough to score a run. The next fly ball was deeper – Taffy Wright’s fly ball to center. Knickerbocker tagged and scored. Third baseman Dario Lodigiani hit a fly ball, too, to center field – and DiMaggio simply dropped the ball. (He had recently suffered a sprained wrist.) That third Red Sox error of the inning allowed Appling to score with ease. Wagner was no doubt glad to finally get the third out.

Neither team scored again until the bottom of the sixth, when Kuhel tied the game with a homer that “drifted into the right field stand.”5

Both Rigney and Wagner buckled down. No one reached base for the Red Sox in the top of the fifth. In fact, after the Williams home run in the third inning, Rigney allowed only three scattered singles and three walks until the 11th inning.

Catcher Mike Tresh hit a two-out triple in the bottom of the seventh; Rigney was up next and struck out, stranding Tresh at third.

With two outs in the top of the eighth, Spence doubled. Williams walked. Foxx struck out for the third time in a row. White Sox second baseman Knickerbocker singled in the bottom of the eighth, but the next three batters all hit into outs.

In the ninth, Red Sox shortstop-manager Joe Cronin led off with a walk. He remained on first as both Doerr and Tabor hit into outs – and then was caught stealing with catcher Frankie Pytlak at bat.

Chicago mounted a threat in the bottom of the ninth. With one out, center fielder Mike Kreevich doubled in the left-field corner. Myril Hoag was walked intentionally. Tresh fouled out to Pytlak. Rigney grounded out, Tabor to Foxx. The game remained tied and went to extra innings.

Rigney retired the Red Sox batters in order in the top of the 10th.

In the bottom of the inning, Knickerbocker started another threat, leading off with a double that hit the left-field wall. Appling sacrificed him to third base. Wagner then loaded the bases with intentional walks to Kuhel and Wright. Lodigiani was up. He hit the ball right back to Wagner. It glanced off his glove and went right to Cronin at shortstop. Cronin threw to Doerr, who threw to Foxx for a 1-6-4-3 double play that ended the inning.

In the top of the 11th, Stan Spence struck out. Ted Williams left the on-deck circle and stepped into the batter’s box. He hit a ball to the same area as his first home run, but one that was hit about 50 feet higher and “onto the top of the double-deck stands. … Ted’s blow must have covered 450 feet at least and was the proverbial mile high,”6 the Boston Globe wrote. The Boston Herald wrote that the ball went “to the very top of the right-center-field grandstand upper roof,” adding, “A conservative estimate of the distance the drive would have gone, on the level, was 500 feet.”

It gave the Red Sox the lead. The Globe called it “a prodigious home run swat” and said, “The roof of the upper deck in right field is nearly 400 feet from the batter’s box. Williams’s drive was a lift far above the top of the upper grandstand roof, which in turn must be 70 feet above the playing field. When it landed on the roof the ball bounded at least 50 feet in the air, and then disappeared to parts unknown.”7 Williams had driven in three of Boston’s four runs.

With one out in the bottom of the inning, Wagner walked Tresh, saw him sacrificed to second base, but then got pinch-hitter Larry Rosenthal to make the final out, popping up foul to Pytlak. Wagner had held back Chicago for a 4-3 win.

Both starting pitchers had gone the distance.

After playing 11 full innings, before 2,463 spectators, the Wednesday afternoon game concluded just 2 hours and 5 minutes after it had begun.

Rigney gave up 21 homers in 1941, more than any other major-league pitcher. Four of the 21 home runs were hit by Williams – the two in this game and another game-winner on June 6 at Comiskey, and finally a solo home run at Fenway Park on July 22. Rigney’s final record, though, was a reasonably respectable 13-13, 3.84.

Ted Williams, dubbed a “loose-jointed fly chaser” in the Chicago Tribune’s game story, finished the 1941 season batting .406, the last time a player in either the American or National League hit .400.8 Going 3-for-4 in this game helped.

8 The colorful phrase was used by the Tribune’s Vaughan.