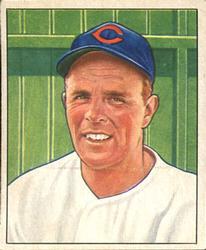 By the time Johnny Vander Meer came to the Cleveland Indians a few weeks before the 1951 season kicked off, he was far from the dominating starter who threw back-to-back no-hitters in 1938. After he was released by the Chicago Cubs on March 30 for loafing,1 Vander Meer made a call to an old friend from his first minor-league season with the Brooklyn Dodgers in 1933: Al Lopez, the Indians manager who needed a southpaw in his bullpen.

“I called Lopez right after the Cubs released me. He was the first one I got in touch with,” said Vander Meer, who spent time with Lopez, then a star major-league catcher, in spring training during his early seasons as a minor leaguer with the Dodgers. “I’ve known him for a long time, and I’d like to play for him.”2

Vander Meer reported to Cleveland’s training camp in Texas without a contract on April 7, instead coming to the club on a “look” agreement that could land him a roster spot.3 He was knocked around by the New York Giants for five runs in one inning during his spring-training debut on April 12, an outing Cleveland Plain Dealer sports editor Gordon Cobbledick likened to the bombing of Italy’s Monte Cassino during World War II.4 But three days later, Vander Meer pitched three shutout innings of relief against the Giants in the spring-training finale and earned himself a contract with the club.

The 36-year-old veteran wasn’t used until he was forced into an emergency start5 to close a three-game series against the Washington Senators on May 7, nearly three weeks into the season, and what would be the final appearance of his 13-year career was unfortunately one he preferred be forgotten. Vander Meer was again bombed like Monte Cassino, surrendering six runs over three innings, but his teammates – especially Larry Doby and Dale Mitchell – provided a counterattack that nearly made the poor outing an afterthought, before their comeback fell one run short in an 11-10 loss at Cleveland Stadium.

The Senators started Sandy Consuegra, the younger half of a dynamic Cuban duo atop Washington’s early-season rotation. The 30-year-old from Potrerillos was seemingly on a career trajectory opposite to Vander Meer’s. Only in his second major-league season, Consuegra came into the game with an undefeated mark in three starts and a 1.00 ERA, and he was joined in the rotation by fellow countryman Connie Marrero, a 40-year-old who had likewise started the season at 3-0 with a 1.00 ERA.7 Another pitcher, Julio Moreno; rookie infielder Willy Miranda; catcher Mike Guerra, who was acquired from the Red Sox in a trade on May 7; and September call-up Frank Campos gave the Senators a grouping of Cuban players rarely seen in the big leagues.8

Perhaps buoyed by the hope that Consuegra would continue his strong start, the Senators staked him to an early lead and then pursued a major-league record while chasing Vander Meer from the game. Frank Sacka hit an RBI single to right field in the second inning, but action slowed until the Senators exploded in the fourth with five runs on eight straight singles, which fell two shy of matching the major-league record for consecutive hits in an inning.

Vander Meer allowed the first five of those hits and was removed from the game. Rookie reliever Red Fahr surrendered the final three hits in the sequence before inducing a popup to third and a double-play grounder, but Washington took what appeared to be a commanding 6-0 lead after the outburst.

Cleveland staged a comeback right away. Al Rosen and Doby led off the bottom of the inning with singles, and Allie Clark scored them both with a double to left. Jim Hegan walked between outs, and Mitchell cut the lead to 6-4 with a triple to center. He overran third base and got caught in a rundown, spoiling what could have become an inside-the-park home run. By game’s end, Mitchell had fallen a homer short of the cycle for the seventh time in his career.

Dick Rozek came to the mound for Cleveland in the fifth, and the Senators replicated the Indians’ fourth-inning offense. Mike McCormick and Cass Michaels opened with back-to-back singles, and both scored on a double to left by Sam Dente that chased Rozek from the game. After two outs were recorded by new reliever George Zuverink, Eddie Yost was hit by a pitch, Gil Coan walked, and Irv Nolen tripled to center for an 11-4 lead.

The Indians again cut into their large deficit in the bottom of the inning. Doby’s three-run home run to left ended Consuegra’s start after 4⅓ innings and trimmed Washington’s lead to 11-7. Consuegra later blamed his poor showing on his “not right arm.”9 He didn’t pitch again for eight days while the soreness dissipated and was soon relegated mostly to bullpen work. Against the Indians, he gave way to Mickey Harris, a former All-Star starting pitcher who walked four but didn’t allow a hit until the eighth. That was a one-out triple by Mitchell, who tripled twice in a game for the second time in his career. Mitchell scored on Bobby Avila’s single to right.

Cleveland’s sixth pitcher of the game was Steve Gromek, who entered for the ninth. He allowed two singles and a walk to load the bases with one out, but got an infield fly and a strikeout to escape the jam and give his offense one last chance to make a comeback.

Doby and Clark hit back-to-back home runs off Harris to lead off the bottom of the ninth, cutting Washington’s lead to one run and breathing life into what was left of the 3,261 fans who attended the Monday night game, now approaching its third hour. But Harris buckled down for three straight outs to earn his second victory of the season.

The loss dropped Cleveland (11-6) to third in the standings, while the Senators (12-6) vaulted ahead of the Indians by a half-game. The eventual World Series champion New York Yankees led them both. Washington wouldn’t get any closer to first place after a steady fall throughout May left the Senators in sixth place. They’d close the year at 62-92. The Indians toiled in the middle of the pack for most of the summer before surging into first place during August. But Cleveland’s 4-10 mark in the final 14 games of the season helped give the Yankees a five-game cushion in the final standings.

Vander Meer wouldn’t pitch again for Cleveland in an official game but did make an appearance during a charity exhibition at Pittsburgh on June 25 that benefited the Pittsburgh Children’s Hospital.10 He was given his unconditional release two days later and signed with the Oakland Oaks of the Pacific Coast League on July 4. He remained in the minors until 1955, even throwing another no-hitter along the way.

“I throw just as hard, but the ball doesn’t go quite as fast,” Vander Meer said a few weeks into his time with Oakland. “But playing baseball beats carrying a lunch pail any day.”11

In addition to the sources cited in the Notes, the author consulted the Baseball-Reference.com, Stathead.com, and Retrosheet.org websites for pertinent materials and the box scores. He also used information obtained from game coverage by the Cleveland Plain Dealer, Akron Beacon-Journal, and Washington Post.

1 Cubs manager Frankie Frisch released Vander Meer after he was found sunning himself instead of running his ordered laps around the field. “I don’t want any lackadaisical players on my club,” Frisch said of the incident. Associated Press, “Frisch Fires Vander Meer,” Akron Beacon Journal, March 31, 1951: 11. Vander Meer gave a retort to The Sporting News, stating he was following a doctor’s orders to help soothe a sore back. “A doctor told me to let sun on my back and it would help it,” Vander Meer said. “For three days I went out to right field and took my shirt off to get the benefit of the sun rays. Since then look what has happened.” Bobby Hicks, “Not Loafing, Says Vandy on Release – ‘Sunning Back on Doctor’s Orders’” The Sporting News, April 11, 1951: 18.

5 Cleveland was without the services of Bob Feller and Bob Lemon, who were each nursing minor back injuries. That necessitated Bob Chakales and Lou Brissie pitching during a doubleheader on May 6. Another option to start on May 7 was Steve Gromek, but he was sidelined with the flu (although he did ultimately pitch in relief against the Senators).

7 Neither Consuegra nor Marrero could keep up the pace. Consuegra finished the year 7-8 and appeared in more games out of the bullpen (28) than he started (12), while Marrero went 11-9 in 25 starts.

8 In 1951 only three other players of Cuban descent appeared in the majors. Six Cubans played for Washington in 1950, and in 1944, there were nine Cubans to appear in a game for the Senators.