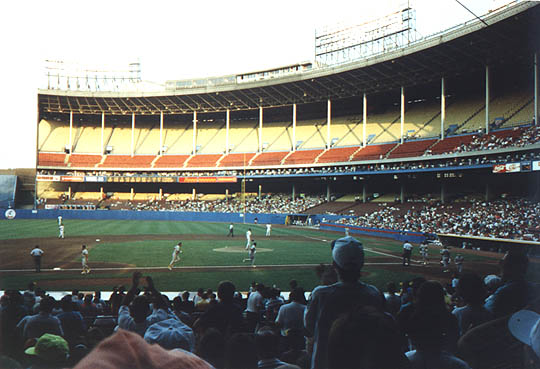 This article was written by Tom Wancho

I am gone and forgotten. People who sat in my seats rarely recall me fondly, if they remember me at all. When the wrecking ball began to demolish my 64-year-old sides in December 1996, there was no public outcry to save me. It was a slow, painful death, memories cascading underneath the rubble that occasionally brought Cleveland sports fans a reason to celebrate, and hope.

Although I was officially kicked to the curb after Art Modell moved the Browns to Baltimore following the 1995 NFL season, my demise began decades earlier. Anyone who went to see the Indians or Browns play from the 1970s on could see the wear and tear that living by icy Lake Erie had taken on me. Peeling paint, crumbling concrete, inoperable escalators and elevators, uncomfortable seats, flooded restrooms, misnamed luxury boxes, obstructed views were always a part of me but had become more noticeable, and a general coldness that lasted well beyond winter peppered my résumé.

I wasn’t always that way.

During my first baseball game, a July 31, 1932, Sunday showdown against the Philadelphia Athletics attended by baseball royalty and 80,284 fans, I was praised for what I was, not what I would become. Baseball’s first commissioner, Judge Kenesaw Mountain Landis, commented, “This stadium is perfect. It is the only baseball park I know where the spectator can see clearly from any seat. Look at those people out there (he said pointing to the crowded center-field bleachers); they can watch every play.”[fn]Cleveland Plain Dealer, August 1, 1932[/fn]

Landis turned around in his box seat near the Indians’ dugout and swept the grandstands with his hand. “Not a barrier to block anyone’s view. Comfortable chairs. This is perfection.” Obviously, the Commish never saw a game from beyond the box seats.

John Heydler, the National League’s president, said, “Marvelous. It is the last word in baseball parks. A great thing for baseball. And one should not forget to give (Indians president) Mr. (Alva) Bradley credit, either.”[fn]ibid[/fn]

And this from Thomas S. Shibe, Athletics president: “This was built for baseball. I wish we had this in Philadelphia for the last three World Series.”[fn]National Register of Historic Places Inventory ― Nomination Form, October 1985.[/fn]

According to the October 1985 Inventory Nomination form for a listing on the National Register of Historic Places, “Cleveland Municipal Stadium was designed by the progressive city administration as a multipurpose structure to accommodate the great surge in attendance at baseball and football games and other public spectacles that occurred with the rise of the automobile.”[fn]ibid[/fn]

The Nomination Form goes on to read, “Since then, in addition to baseball and football, the range of activities at the stadium has included religious convocations, the Metropolitan Opera, the Beatles, circuses, rodeos, big bands, tractor pulls, and polka festivals.”[fn]Cleveland Plain Dealer, January 20, 1980[/fn]

It is interesting that the “great surge in attendance at baseball and football games” was mentioned in the application. From 1922 through 1931 the Indians averaged 491,227 fans per year to League Park, good enough for a fifth-place average in the eight-team American League during that span. In fact 1931 was the only year during that decade that the Clevelands finished as high as third in attendance, behind the New York Yankees and Philadelphia Athletics. Attendance figures for the Cleveland franchise (1920-1923) in the fledgling National Football League are sketchy.

If you build it … who will come?

Constructed on a landfill that stretched the Stadium 200 feet farther into Lake Erie, the facility was completed in 370 days at a cost to taxpayers of $3,035,245. Although 21 percent over budget, the cost overruns were attributed to the addition of a scoreboard, sound system, and infrastructure around the facility, including bridges, railroads, and road work.

The Stadium’s first sporting event took place two days after work had been completed. The heavyweight bout between champion Max Schmeling of Germany and Young Stribling was witnessed by 37,000 fans on the night of July 3, 1931. Schmeling scored a 15-round TKO. The remainder of the summer of ’31 brought a Shriners convention and the “Grand Summer Opera Week” to the new edifice by the lake.

Under pressure from city leaders, unhappy while their 80,000-seat stadium sat vacant, Bradley agreed to play most doubleheaders and other games expected to draw larger crowds at the Stadium. The Tribe didn’t move downtown full time until 1947, after Bill Veeck purchased the club.

Ten years before that, the Cleveland Rams played exactly one game – the first in franchise history – at the Stadium, drawing 20,000 fans for a 28-0 loss the Detroit Lions on September 10, 1937. Because the Stadium “was too big and the rent too high,”[fn]ibid[/fn] when the Rams won their only NFL championship in 1945, all of their home games were at League Park, though they did play the title game at the Stadium.

According to Rams public relations director Nate Wallack, “Our season-ticket sale was nothing (in) those days. Maybe 200 at the most. We put the championship seats on sale and immediately we sold 30,000 and we had another week to go before the game. The weather was beautiful. It looked as though we’d sell out the Stadium. Then a blizzard. I mean an awful one. It ended our sale. Now Bill Johns, our business manager, was worried about the field. He wanted to keep it from freezing. He got in his car and set out toward Sandusky, stopping at every farm to buy hay. He wanted to cover the field with it. He bought over 1,000 bales.

“The day of the game the temperature dropped to zero. I sat in the press box and the windows got so steamed we couldn’t see. All the writers had to get out into the stands and freeze. Me too. A water pipe broke in the upper deck and cascading water turned to ice immediately – a frozen waterfall. The fans burned the hay and even the wooden bleacher seats to keep warm. One fan froze his feet and didn’t realize it until he started to walk home after the game. An ambulance had to be called. The game was so exciting, though, the fans stayed to the end. We sold about 35,000 tickets and 29,000 showed.”VII   The Rams’ 15-14 victory over the Washington Redskins was the team’s last game in Cleveland. Mickey McBride, a Cleveland taxicab magnate, purchased a franchise for the new All American Football Conference, to be named after its head coach, former Massillon and Ohio State head man Paul Brown. McBride signed a long-term lease to play home games at the Stadium. Typical of the doom that would frequent Cleveland professional sports teams, the Rams moved to Los Angeles after winning a championship.

The Stadium entered an unprecedented period of success after the Browns and Indians became its chief tenants beginning in 1946 and 1947, respectively. The Browns won every championship during the four-year history of the All American Football Conference, with three of those wins taking place on the Stadium’s turf. The Indians set a baseball attendance record in 1948, drawing 2,620,627 fans as they won Cleveland’s second―and to date, last―World Series. The Tribe captured Games Three and Four at the Stadium before wrapping up the title at Braves Field in Boston. Noteworthy in the Game Five home loss was a then-World Series-record crowd of 86,288 who had hoped to see the Clevelanders wrap the series up at home.

While the ’50s remained kind to the Browns, the Indians began a slow descent that concluded with a remarkable tumble down the American League standings during the latter decades of the 20th century. Despite posting a then all-time American League best 111-43 record in 1954, the Tribe was swept in that year’s World Series by the New York Giants. The last World Series game played in Cleveland Stadium was seen by 78,102 disappointed fans.

The Browns entered the NFL in 1950 and promptly captured that season’s title with a 30-28 Christmas Eve victory over the … Rams, who returned to the Stadium for the first time since leaving for Los Angeles five years before. Cleveland appeared in six of the next seven NFL title tilts (going 2-4), including a 1955 championship at the Stadium. The Browns’ 27-0 shutout over the Baltimore Colts at the Stadium on December 27, 1964 remains the last championship captured by a Cleveland professional sports franchise.

Whether it was sports or other events, the Stadium provided a backdrop for a multitude of memorable moments. Ted Williams hit his 500th home run there on June 17, 1960. The Indians’ Len Barker pitched the tenth perfect game in major-league baseball history against the Toronto Blue Jays on May 15, 1981. Joe DiMaggio’s 56-game hitting streak ended there on July 17, 1941. Bob Feller whiffed a then-record 18 Detroit Tigers on October 2, 1938, from the Stadium’s mound. The first Monday Night Football game ever played pitted the Browns against Joe Namath’s Jets on September 21, 1970, from the Stadium. Four MLB All-Star Games were held at the Stadium.

Cleveland Stadium was also home to 10¢ Beer Night and “The Drive” engineered by John Elway. The Browns ended up on the wrong end of another playoff game against the Oakland Raiders on January 4, 1981, after quarterback Brian Sipe had a pass intercepted at the east (open) end of the Stadium when a field goal would have won the game. That led to a joke: What do a Billy Graham Crusade and a Cleveland Browns game have in common? Answer: 80,000 fans leaving the Stadium murmuring “Jesus Christ.”

Stadiums are public gathering places, often for sporting events. They are steel, concrete, grass, dirt, seats, and scoreboards. What transpires within their walls brings fans together, be it in victory or defeat. Some fans have fond memories of the Cleveland Municipal Stadium. It represents their youth, possibly the site of their first major league or NFL game. Its decrepitude, warm beer, and cold hot dogs are also part of the collective memory bank.

Over time, the Stadium became known as the “Mistake by the Lake” After its demolition, the old Stadium’s reinforced concrete was dumped in Lake Erie and used as a barrier reef for fishermen. Like Luca Brasi from The Godfather, it sleeps with the fishes.