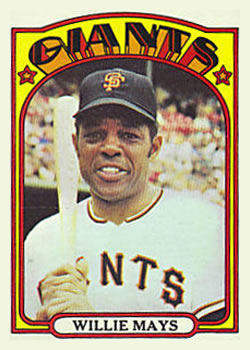 On May 11, 1972, the San Francisco Giants traded Willie Mays. It was as unthinkable to denizens of the City by the Bay as losing the team was to New Yorkers in 1957. Mays began his major-league career with the New York Giants in 1951 and headed back to the Big Apple two decades later in a trade putting him in the employ of Mets owner Joan Payson. They came full circle — Payson had been a minority owner of the New York Giants, but sold her share when majority owner Horace Stoneham vacated the Polo Grounds for San Francisco. Mays was Payson’s favorite player.

It was not a complete surprise — there had been rumblings about Mays’s standing in San Francisco. In a May 1 piece, Sacramento Bee sportswriter Tom Kane remarked on Mays’s .146 batting average through April, plus the vague explanation of the star center fielder “not feeling well” when he left the first game of a Giants-Expos double header in the third inning on April 30. Noting that the Giants front office had scheduled a meeting on May 1 to discuss their roster, Kane inquired, “But where does Mays go from here?”1

In what was to be his last game in a Giants uniform, Mays banged a base hit in a pinch-hitting role against the Montreal Expos at Jarry Park (Parc Jarry to Montrealers) on May 9. The last-place Giants lost 7-1 in this first game of a three-game series and split the next two games. They were 7-15 going into Montreal.

Juan Marichal kept the Expos scoreless in the first two innings. But catcher John Boccabella tripled to lead off the bottom of the third and scored on Tim Foli’s sacrifice fly to right fielder Bobby Bonds.

Montreal added another run in the fourth. First sacker Mike Jorgensen singled and advanced to second when Ron Fairly executed a sacrifice bunt handled by Giants backstop Dave Rader. Ken Singleton grounded out on a 1-3 play; Jorgensen went to third and Boots Day singled him home.2

The score stayed 2-0 until the bottom of the sixth, when Montreal padded its lead with four more runs aided by error-prone fielding. Bob Bailey started the barrage with a single. Marichal fielded Jorgensen’s bunt and threw to second baseman Tito Fuentes for a force out. But his errant throw sent the ball to center field. Marichal’s error — the first of four for the Giants in the half-inning — put men on first and third with Fairly, the Expos’ leading batter in 1972, coming to bat. Fairly flied out to center fielder Ken Henderson for the second out. It looked as though Bailey and Jorgensen might be stranded. But Giants first baseman Dave Kingman “bobbled … the relay throw” and the Giants had their second error of the inning;3 Jorgensen took second base.

Marichal loaded the bases with an intentional walk to Singleton, who had the second-highest average on the Montreal nine in 1972. But hopes of a double play evaporated quicker than fog at the Golden Gate Bridge during a hot, cloudless, humidity-free morning. Second baseman Fuentes fielded Day’s groundball with a “nifty soccer kick”4 instead of his glove. Bailey, Jorgensen, and Singleton scored on the error — the Giants’ third of the inning. Day wound up at third base.

Boccabella’s fielder’s-choice grounder gave Marichal something to do besides watch the defensive failings. He threw to third baseman Al Gallagher, who fired to Rader; Day was tagged out at home plate. But Marichal followed by plunking Foli, and Expos hurler Mike Torrez followed with a bunt single. With the bases loaded for the second time in the inning, Giants fans from Palo Alto to the Presidio groaned as they listened to the radio broadcast or watched the game on television.

Shortstop Chris Speier mishandled a groundball hit by Ron Hunt, which counted for the fourth “E” on the scorecard for the Giants’ half of the sixth inning. Boccabella scored. But Speier recovered to nail Foli at home plate for the third out.

In the bottom of the seventh, the Giants made their fifth error. Bailey led off with a grounder to Gallagher for a 5-3 play, but Kingman dropped the third baseman’s low throw. The scorekeeper noted an error for Kingman; Marichal’s wild pitch to Jorgensen put Bailey on second.

Jorgensen flied out to Day in center; Fairly got an RBI when Bailey scored on his single.

The Giants got their lone run in the top of the eighth with a two-out rally, ending Montreal’s hopes for a shutout. Before the inning began, Expos manager Gene Mauch made a defensive change, sending Clyde Mashore to substitute for Fairly in right field. Torrez retired Chris Arnold and Speier on infield groundouts, then gave up a single to Fuentes. Mashore’s error moved him to second base and Bobby Bonds brought him home with a single.

In the top of the ninth, Torrez — the only Expos starting pitcher with a won-lost record above .500 in 1972 (16-12) — got both Gallagher and Jim Howarth on groundouts to second. Rader’s single prompted Giants skipper Charlie Fox to replace Barr with Mays at the plate; he put runners on first and third with a single to center field. Speier’s grounder to shortstop ended the game.

San Franciscans had no singular reason to think it would be Mays’s last game in a Giants uniform. The day after the game, the Associated Press reported that a deal with the Mets fell through.5

But the teams reconciled a day later — the “Say Hey Kid” returned to New York in exchange for minor-league pitcher Charlie Williams and a cash amount that was not specified in news reports initially. The Mets took on the remainder of Mays’s $165,000 annual salary.6

Giants owner Horace Stoneham dissuaded those who questioned whether there was a financial motive for trading the icon: “Our club is not in bad shape financially. The basis behind all this was Willie’s future after he retires. We don’t need the money. I think this way it is much better for Willie.”7

At 41 years old, Mays was no longer a fleet-footed outfielder. But there was a sense of nostalgia in his return to New York. It was most evident, perhaps, in seeing him wearing a cap with the familiar “NY” that the Mets borrowed from the Giants.

Mays batted .267 in 69 games for the remainder of the ’72 schedule. In 1973, he hit .211 in 66 games. He went 2-for-7 in three games against the Oakland A’s in the World Series. The Mets lost in seven games. It was the last time Willie Mays played in professional baseball.

The author used Baseball-Reference and retrosheet.org for box scores and play-by-play information.

2 Jorgensen, Foli, and Singleton had come to the Expos in a trade with the Mets for Rusty Staub in early April.