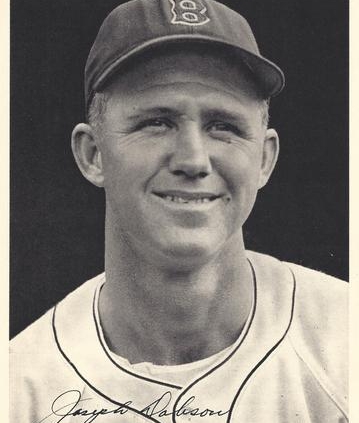 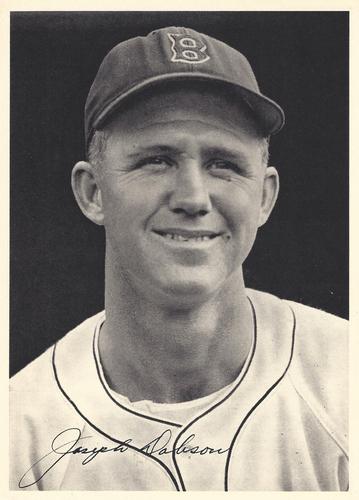 In Game Four of the 1946 World Series, the visiting St. Louis Cardinals had rapped out 20 hits. In Game Five, they got only four.1 It was the Red Sox who hit into double digits this time — but won only thanks to a three-run flurry in the seventh inning.

Unheralded Joe Dobson, 13-6 during the regular season, spun a gem, keeping the Cardinals hitters at bay and allowing only two hits to pick up the win. All of St. Louis’s runs were unearned, following two errors by shortstop Johnny Pesky.

Dobson was a right-hander, missing two fingers on his left hand due to a childhood injury involving a dynamite cap. He was in the midst of an eight-year stretch with the Red Sox. In 1944 and 1945, he served in the US Army. He was discharged in mid-February 1946, just in time for spring training.

One of the reasons manager Joe Cronin went with Dobson in Game Five was that he had been 11-1 at Fenway Park in 1946.2 It was an unexpected move, however, and a Boston Globe headline referred to him as the “Forgotten Hurler.”3 But Cronin said afterward that he’d “had him in mind as part of my pitching sequence right along.”4

Game One starter Howie Pollet pitched for St. Louis. The left-hander pitched a 10-inning complete game in Game One, allowing just three runs but losing to Rudy York’s solo home run in the 10th. He had led the National League with 21 wins (21-10) and a 2.10 ERA.

Cardinals manager Eddie Dyer pulled him quickly, though, in Game Five.5 Don Gutteridge, playing second base because Bobby Doerr had come down with a migraine headache at the end of the previous day’s game, swung at the first pitch and hit an infield single that “caromed off Stan Musial.”6 Johnny Pesky hit a single to right field. Gutteridge was forced at third on a groundout by Dom DiMaggio.

Ted Williams came up to bat. Shortstop Marty Marion moved a few steps to the right of second base, in a shift. Williams hit a “screaming line single”7 over the heads of the infielders into right field to score Pesky; he made it to second on the throw to the plate.

Apparently Pollet was suffering something of a “lame shoulder”8 and Dyer didn’t want him to face York again. Alpha Brazle relieved Pollet after only four batters — and then intentionally walked York. Pinky Higgins hit a grounder to third and the throw home forced DiMaggio for out number two. The bases were still loaded, but Leon Culberson grounded out to end the threat. Brazle pitched through the seventh inning.

The run that Williams singled in was the only run he drove in during the entire seven-game 1946 World Series. This was the only postseason in which he ever played, leaving him with a career .200 postseason batting average and the one RBI — and five strikeouts. He was still suffering from the injury he’d incurred when hit by a Mickey Haefner pitch while the Red Sox had tried to keep sharp in the days before the World Series.

The Cardinals tied it up, 1-1, in the top of the second. With two out, shortstop Pesky bobbled a ball hit by catcher Joe Garagiola. Harry Walker doubled off the left-field wall and Garagiola scored.

The Red Sox wasted no time regaining the lead, albeit just by one run again. In the bottom of the second, catcher Roy Partee singled to center. Dobson was up and predictably laid down what was intended as a sacrifice bunt, but rather than taking the easy out, third baseman Whitey Kurowski threw to second base to try to get the lead man. The throw was a hair too late and both were safe.

Gutteridge singled to center field, driving in Partee. There was a dispute that continued after the game, the Cardinals arguing that Partee had been out at the plate.9 With two on and none out, the Red Sox had a chance to expand their lead, but Brazle again was up to the challenge. Pesky grounded back to Brazle, who threw out Dobson at third base, and DiMaggio hit into a 6-4-3 double play.

Both sides went down in order in the third. Both teams got a baserunner in the fourth and saw their runner steal successfully, but neither team scored a run.

In the fifth, Dobson retired the three batters he faced. The Red Sox put runners on first and second with none out in the bottom of the inning. Ted Williams came up but struck out on three straight swings and misses. The runners — Pesky and DiMaggio — tried a double steal with York at the plate, but the lead man, Pesky, was thrown out. York was again walked intentionally, but Higgins grounded out, short to first.

Stan Musial doubled with two outs in the top of the sixth, but for naught.

Leon Culberson hit a leadoff homer into the net above the left-field wall in the bottom of the sixth to increase Boston’s lead to 3-1.

An error by York in the seventh allowed Walker to reach base, but he never got past first.

The floodgates opened for Boston in the bottom of the seventh. Swinging at Brazle’s first pitch, DiMaggio doubled into the left-field corner. (His brother Joe was watching from a seat behind the Red Sox dugout.) Ted Williams struck out again, this time on a called third strike.

York was (for the third time in the game) issued a free pass. Higgins doubled to left-center and scored DiMaggio. Culberson drew an intentional walk to load the bases. Partee hit a sharp groundball toward shortstop that Marty Marion fielded, looked for the force at second, and threw into right field. Two more runs crossed the plate on Marion’s error, making it 6-1. Dobson struck out and Gutteridge flied to center to end the inning.

Dobson prevented St. Louis from answering in the eighth by striking out both pinch-hitter Nippy Jones and Red Schoendienst and getting Terry Moore to ground out, short to first.

Johnny Beazley took over for Brazle to work the bottom of the eighth. Pesky singled and went to second on DiMaggio’s sacrifice. Williams fouled out, a pop fly to the catcher.

Dobson walked Musial, the first man up in the St. Louis ninth. Erv Dusak, who’d come into the game in the seventh to play left field, struck out.10 Pesky mishandled Kurowski’s grounder — his second error of the game — and the Cardinals had runners on first and second with one out. Garagiola’s groundout moved the runners to second and third. Harry Walker singled to right field and both Musial and Kurowski scored. The game ended when Marty Marion popped up to Pesky. The final score was Boston 6, St. Louis 3.

Walker had driven in all three Cardinal runs.

Now up three games to two, the Red Sox were on the brink of winning their first World Series since 1918; the fact that Ted Williams was in a serious slump hardly seemed to matter anymore.

Dobson got the win. Despite the 6-3 score, he’d thrown a complete-game win without allowing even one earned run. Indeed, John Drebinger of the New York Times wrote that if not for the two errors, “Dobson would most likely have had a shut-out.”11 Dobson walked one and struck out eight. The following year, 1947, he improved to 18-8 with a 2.95 ERA.

The Red Sox held a three-games-to-two edge in the World Series. Both teams headed to St. Louis to wrap up the Series at Sportsman’s Park. If the Cardinals were to win the Series, they were going to have to win both games.12

1 In Game Four, three Cardinals had each collected four hits. The three (Enos Slaughter, Kurowksi, and Garagiola) combined in Game Five for zero.

2 The one loss had been in his final home game, when he gave up one run in the three innings he worked and lost to Washington, 7-0. His Fenway Park earned-run average had been 2.85.

7 Jerry Nason, “Subs Give Sox Series Lead,” Boston Globe, October 12, 1946: 1, 5. Nason noted that Culberson, Gutteridge, and Partee were all among the Red Sox “Rinky-Dinks” — substitute players in the game.

8 Irving Vaughan, “Sox Reach St. Louis; Seek Clincher,” Chicago Tribune, October 12, 1946: 21. After the game, it was learned that Pollet would be unable to pitch again in the remaining games. See Associated Press, “Pollet Lost to Cards,” New York Times, October 12, 1946: 23. “Pollet complained, prior to the game, that his previous pitching in the first game of the series had weakened his left shoulder, evidently from a strain caused by the sore back muscle that has been bothering him for almost a month.” Martin J. Haley, “Brecheen, Ferriss Rivals Tomorrow; Birds Held to Four Hits by Dobson,” St. Louis Globe-Democrat, October 12, 1946: 13.

10 He’d come in to replace Enos Slaughter, who had been hit on the elbow by a pitch.

12 There were three times that a team with a three-to-two lead had lost the final two games on the road — in 1924 by the New York Giants playing in Washington, in 1925 by the Senators in Pittsburgh, and in 1940 by the Tigers in Cincinnati.