October 17, 2017: Dominant Darvish and Dodgers push listless Cubs to the brink in NLCS

October 17, 2017: Dominant Darvish and Dodgers push listless Cubs to the brink in NLCS 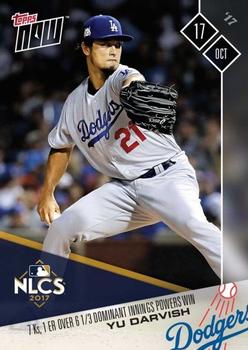 The Cubs returned to Wrigley Field for Game Three of the 2017 National League Championship Series facing the prospect of being pushed just one loss from elimination. After managing a total of three runs and seven hits in two anemic losses in Los Angeles, the Cubs still seemed to be catching their breath from a wild 9-8 win in Game Five of the Division Series in Washington, while the Dodgers looked fresh and confident after sweeping Arizona in their opening series. Now the Cubs were on the brink of going down three games to none in the NLCS.

“We’ve got to win this next one, find a way, any way possible, just to grind out a win,” said Anthony Rizzo. “This game is the biggest game for us.”1

Kyle Schwarber struck the right note in the bottom of the first inning, smashing the first pitch he saw from Dodgers starter Yu Darvish into the left-field seats. The early 1-0 lead brought some joy and much relief to the anxious home crowd.

But Andre Ethier led off the second inning with a solo shot in response, a line drive off Cubs starter Kyle Hendricks. The ball struck Ethier’s name on the right-field scoreboard behind the ivy,2 landing like “a pin to the balloon of enthusiasm in the ballpark,” wrote the Chicago Tribune.3

Chris Taylor soon struck dual blows for the Dodgers. In the top of the third, he launched a 444-foot home run to center that put the Dodgers up 2-1.4 In the fifth, after Joc Pederson doubled, Taylor lashed a triple that struck the chalk of the left-field line and bounded all the way to the ivy, extending Los Angeles’ lead to 3-1.

In the top of the sixth inning, the Cubs stumbled at a crucial moment. After Yasiel Puig reached on an error and Ethier singled, Cubs manager Joe Maddon brought in Carl Edwards Jr., who retired Chase Utley but walked Austin Barnes to load the bases. After Pederson hit a pop fly to right, Darvish’s spot in the lineup came up. Dodgers manager Dave Roberts sent pinch-hitter Curtis Granderson to the on-deck circle, then pulled him back and let Darvish bat for himself.5 The move seemed to concede the out and the inning. Instead, Edwards walked Darvish on four pitches, forcing in a run and giving the Dodgers a 4-1 lead. Boos rumbled at Wrigley Field.6

Hendricks and Edwards had been two of the most reliable hurlers for the Cubs down the stretch of the 2016 postseason; now they had combined for a feeble inning that seemed to sum up the Cubs’ 2017 playoff woes.

Darvish cruised through four more Cubs batters before exiting in the seventh, having scattered six hits, thrown 59 strikes on 81 pitches, and allowed only two runners to reach scoring position after Schwarber’s home run.7

The Dodgers put the game all but out of reach in the eighth. With Logan Forsythe and Barnes aboard and Charlie Culberson at the plate, Cubs pitcher Mike Montgomery unleashed a wild pitch that advanced the runners, followed by a passed ball that scored Forsythe. (Culberson swung at the pitch for strike three but made it safely to first base.) A pinch-hit sacrifice fly to center field by Kyle Farmer brought home Barnes to make it 6-1.

The Cubs finally found some offense in the bottom of the ninth, against Dodgers reliever Ross Stripling. Alex Avila led off with a single and Albert Almora hit a ground-rule double that lodged in the ivy in left and put runners at second and third with no one out, giving the Cubs a flicker of hope. But in came Kenley Jansen, as automatic as any reliever in baseball in 2017. Jansen got Addison Russell to pop up to first base and then struck out the next two batters to end the game.

The Dodgers had won, 6-1, taking a seemingly unshakable grip on the NLCS with a 3-0 series lead.

“Tuesday was never a must-win, it just felt that way,” wrote The Athletic. “Now every game the Cubs have left against the Dodgers this year will be win or go home.”8

“A defending World Series champion getting beaten in the playoffs is one thing. Getting embarrassed is quite another,” wrote the Chicago Tribune, adding that the Game Three loss “carried the feeling of finality.”9

Granted, last year’s team of destiny overcame a 2-1 series deficit to the Dodgers, winning two games on the road to regain the NLCS lead. And even more improbably, those Cubs came back from a three-games-to-one deficit in the World Series to win its elusive championship.

But that team had persevered with an uncanny concoction of optimism, confidence, clutch plays, and benevolent breaks — the kind of alchemy it takes to win any championship, let alone end a century-long curse. This year’s club, by contrast, now appeared deflated and outmatched.

“The Cubs may have thought they could turn it on again in the postseason and magically bounce back from the brink, as they did so memorably last year,” wrote the Tribune. “But the mojo was missing, and no one was exactly sure where it went.”10

With their team’s elimination imminent both mathematically and psychologically, Cubs fans had to come to terms with a new kind of losing: ordinary, pedestrian losing, unlike the tortured, fateful losing they’d known for generations, when postseason droughts and disasters became larger than life and futility defined Cubs fandom. One of the gifts the 2016 Cubs gave their fans by winning the World Series and purging the demons was that future losing would never haunt them in the same way. Losing would hurt, but it wouldn’t cause existential angst.

So what did losing feel like now, in 2017? Mostly, it was just emptiness — the silence of fans sitting on their hands at a muted Wrigley Field, wondering where their team’s bats and pitching had disappeared to, as the Dodgers relentlessly piled up runs and pushed all the right buttons. There was some retrospective relief that last year’s team had broken the curse so that this loss wasn’t part of it, mixed with confusion about how to process the threat of another NLCS sweep after suffering the same fate against the Mets in 2015. Two NLCS blowouts in three seasons would have been unbearable, if not for that euphoric interlude between them.

2 Some descriptive details are based on viewing video highlights of this game at MLB.com, accessed at https://mlb.com/gameday/dodgers-vs-cubs/2017/10/17/526506#game_state=fin....